I am a tennis fan. I try to attend tournaments throughout the year and I watch quite a bit of them on television. The last two weeks the U.S. Open has been played; it ended on Sunday. For those who haven't followed it, this tournament was a breakout tournament for a bunch of teenagers, which made the matches quite exciting. Emma Raducanu, an 18 year old, won the women's final, the first teenager to do so in more than two decades.

I read an article that argued that these young players played with no fear, because it seemed they only knew how to win. They hadn't been playing long enough to know what defeat feels like. The author likened it to young market traders who think stocks only go up and have never seen a bear market. You can imagine how much I enjoyed that analogy.

But then came Sunday and the men's final. Novak Djokovic was going for a calendar-year Grand Slam and his 21st Grand Slam title, which would break what is now a three-way tie with two other players, Roger Federer and Rafael Nadal. For the last year or so Djokovic has not known defeat. He has been winning non-stop. I would liken him to the mega-cap tech stocks: No matter who came up against him, he came out on top.

But Sunday Djokovic met a player he couldn't best and instead of breaking all sorts of records, he lost. I do not think this is the end of his career. But perhaps it's time for a correction from all that winning. Perhaps it was just that too many thought he couldn't lose. So ask yourself, is there anyone who thinks the mega-cap tech stocks can't lose?

I ask this because for the last two trading days it is beloved tech that has been getting sold. The Invesco QQQ exchange-traded fund (QQQ) had its first four-day losing streak since May. And while volume was still less than 50 million shares, it was the highest volume in a month. That means there was some decent selling there. 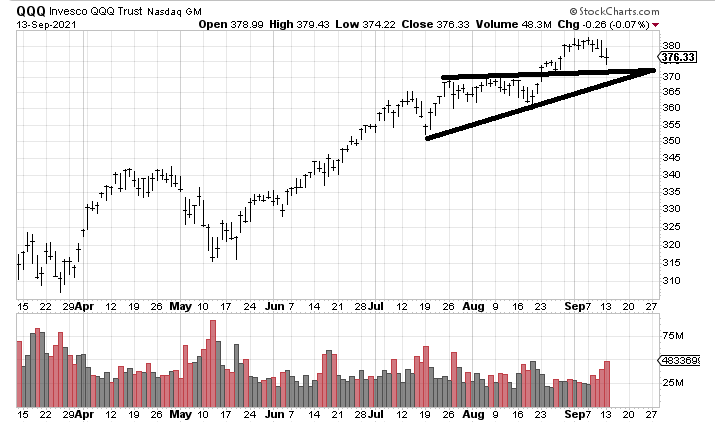 I do not think the QQQs are set to break under $370 on this particular pullback, but as I have said for several weeks now (OK, it's been longer than several weeks!) it is not healthy when we are so concentrated in a handful of stocks. Perhaps it is time to spread the wealth.

Monday's market shook out the bulls in the morning and the bears in the afternoon. I think that is what helps a market move to an oversold condition. On Tuesday morning we will see the consumer price index. I have no idea what the market's reaction will be to it, but if the market opts to pull back, I would note that it is simply edging itself closer to an oversold condition if it does that.