For his "Executive Decision" segment of Mad Money Friday night, Jim Cramer sat down with Rob LoCascio, founder and CEO of LivePerson Inc. (LPSN) , the customer relations software provider with shares up 375% over the past three years.

Locascio explained that after pioneering chatbot software for companies, he realized that voice and Artificial Intelligence (AI) are the future and has now pivoted LivePerson to embrace those technologies. Now, instead of calling a company and being on hold, you can message or talk to an AI bot and get your questions answered and your problems solved.

LivePerson has many examples of their technologies in use, from messaging a bot to order beer and a hot dog for delivery to your stadium seat to bypassing the line checking in to a Las Vegas hotel. Locascio said now that Apple (AAPL) has opened up iMessage to businesses, that will be yet another platform for LivePerson to integrate their technology into.

That's the fundamental story, how about the charts and indicators?

In the daily bar chart of LPSN, below, we can see that LPSN made a strong rally from late December but prices have not made any upside progress in the past three months. Trading volume has slowed from early March and the daily On-Balance-Volume (OBV) line has weakened since early April.

The 12-day price momentum study in the lower panel shows lower peaks from early February even though prices made equal peaks. This difference is called a bearish divergence by technical analysts. A bearish divergence can sometimes foreshadow price weakness.

In the weekly bar chart of LPSN, below, we can see that patient longs from the middle of 2016 have made out very nicely as prices have rallied from around $6 to $30. LPSN is above the rising 40-week moving average line.

The weekly OBV line has weakened a little the past two months signaling a shift to more aggressive selling. The trend-following Moving Average Convergence Divergence oscillator has narrowed significantly towards a bearish crossover.

In this Point and Figure chart of LPSN, below, we can see a projected downside price target of $25. There is not much chart support in the $25 area so further declines are possible. 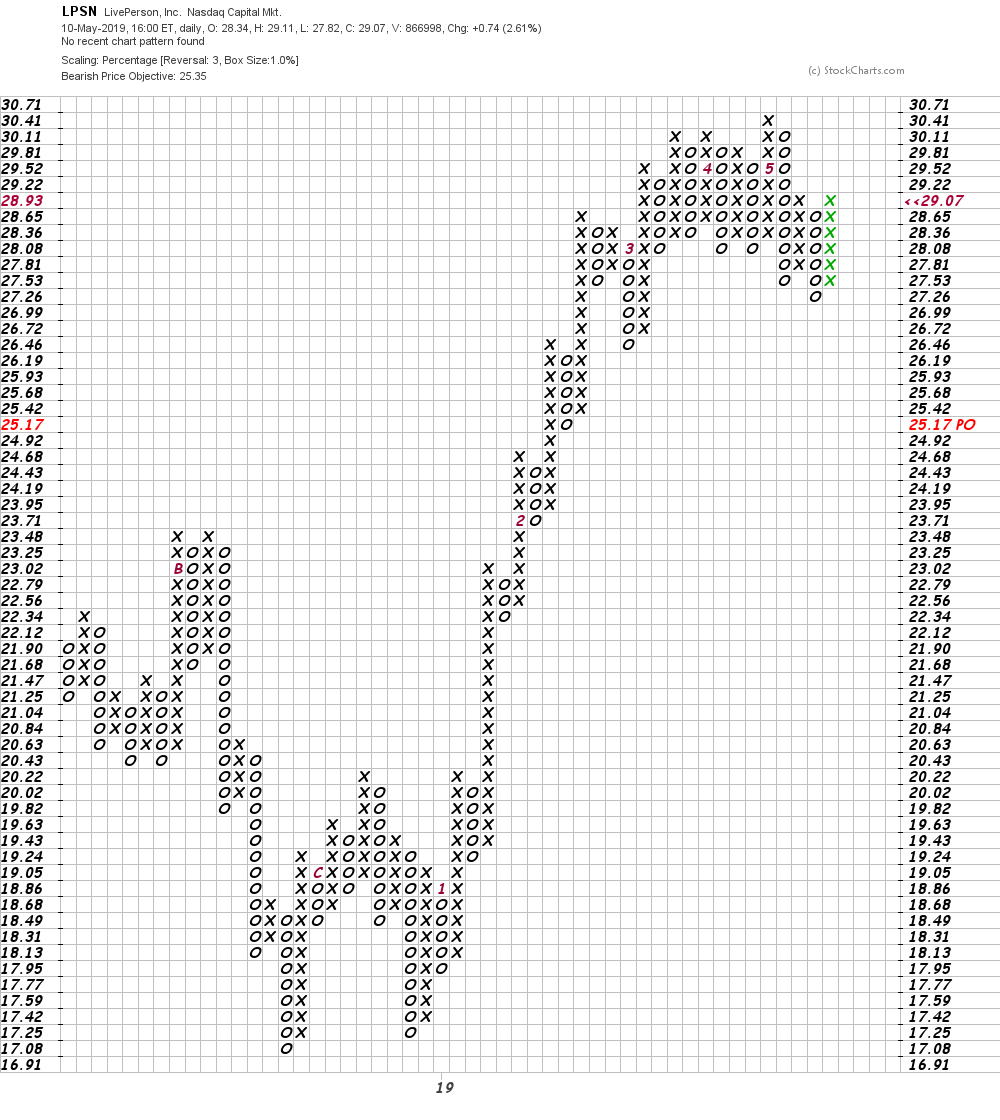 Bottom-line strategy: LPSN has done well for investors the past three years but prices now look vulnerable to declines in the weeks ahead. Don't overstay your welcome.

Get an email alert each time I write an article for Real Money. Click the "+Follow" next to my byline to this article.
TAGS: Investing | Stocks | Technical Analysis | Technology | Executive Interview