For his "Executive Decision" segment of Mad Money Tuesday night, Jim Cramer spoke with Rob LoCascio, founder, chairman and CEO of LivePerson Inc. (LPSN) , the conversational commerce company that saw its shares plunge 25% over the past week on what was widely perceived as a disappointing forecast.

The company forecast 20% to 22% growth in 2020. What investors didn't like, according to LoCascio, was LivePerson's announcement that it will continue to spend on innovation. Let's check out the charts of LPSN to see if there is some innovation.

The trading volume spiked sharply higher telling us that traders and investors headed for the exits. The daily On-Balance-Volume (OBV) has been in a decline from late August and tells us that sellers have been more aggressive for months and that is a sign that renewed price strength is not likely for a while.

The Moving Average Convergence Divergence (MACD) oscillator has been hugging the zero line for much of the past year, which indicates that the uptrend in LPSN has lacked strength. Not a positive looking picture.

In the weekly bar chart of LPSN, below, we can see that prices have closed below the rising 40-week moving average line. The weekly OBV line has been flat from September and thus made a bearish divergence when compared to the price action.

The weekly MACD oscillator crossed to a take profits sell signal back in late September and is now close to the zero line.

In this daily Point and Figure chart of LPSN, below, the software has projected a potential downside price target in the $21 area. 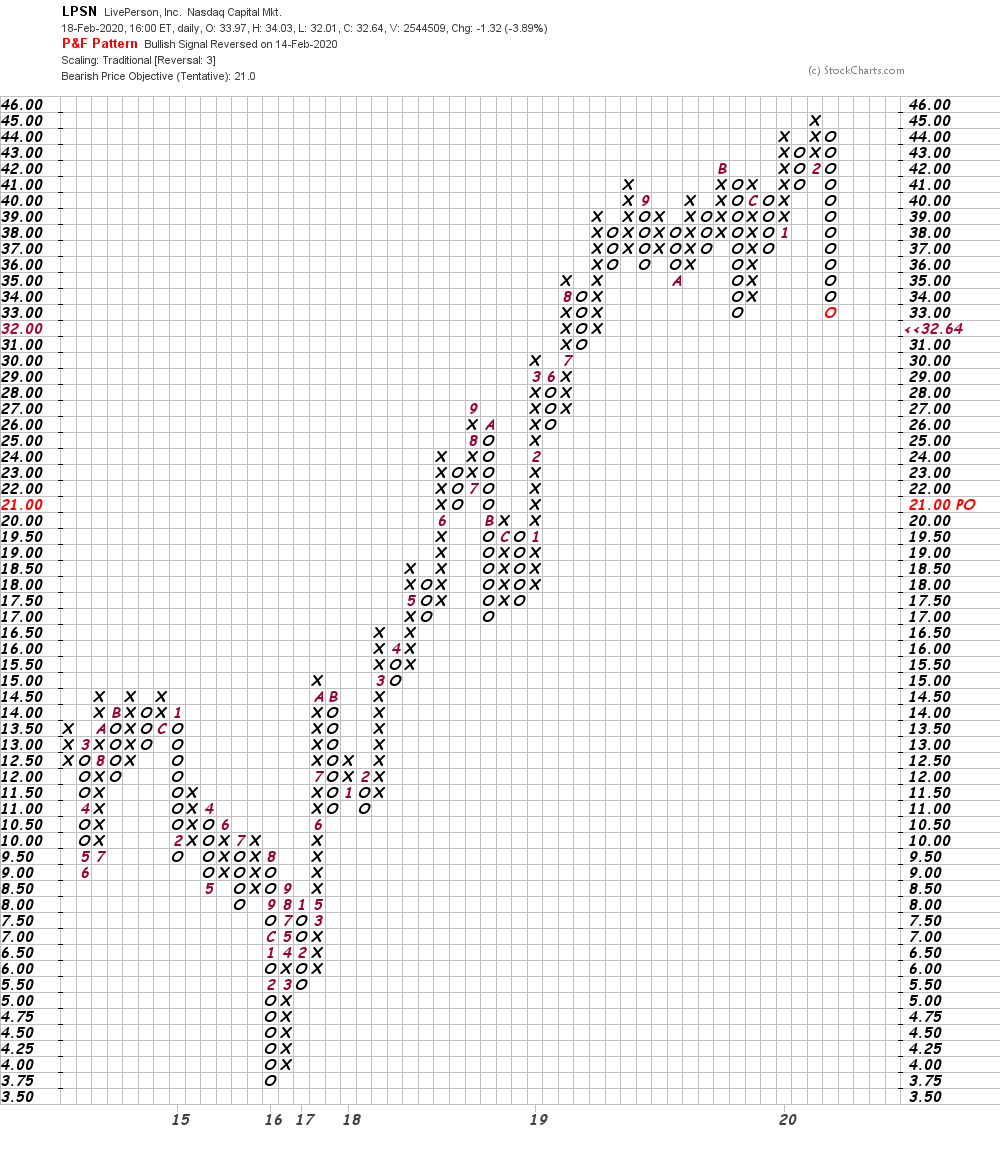 Bottom-line strategy: It seems that the charts and indicators of LPSN have been weakening for several months with volume leading the way. Avoid the long side of LPSN until support is found and new buyers hammer out a base to support a rally.

Get an email alert each time I write an article for Real Money. Click the "+Follow" next to my byline to this article.
TAGS: Earnings | Fundamental Analysis | Investing | Stocks | Technical Analysis | Mad Money | Executive Interview | Telecom Services

Amazon, Tesla News Stir Up Market but Divergences Remain in the Mix

The S&P 500 closes at new highs and FATMAAN names enjoy boost, but look below the surface for the real story.

Still, this may not be the easiest name to buy. No one is jumping in from the value side.

If Twitter's Fall Ruffles Your Feathers, You Have Options