For his first Executive Decision segment of "Mad Money" last Friday, Jim Cramer sat down with Rob LoCascio, founder and CEO of LivePerson Inc. (LPSN) , a provider of business messaging technology that saw its shares plunge 13% two weeks ago after posting mixed results, only to rally 9% in last week's trading.

LoCascio said everyone is messaging their friends and family, so it only makes sense that they also want to message businesses and brands as well. No one likes to call a company, navigate a complicated phone tree, then be put on hold. Now customers can have a quick and convenient text conversation instead.

The power of LivePerson's platform comes from its data, Locascio said. The company handles 60 million conversations a month and that data helps train its artificial intelligence platform, which now processes more than 50% of its volume.

LivePerson also helps companies manage their social channels by providing real-time monitoring of sentiment and helping to facilitate direct interactions with their customers.

Cramer remained bullish on LivePerson despite the stock's recent weakness. Let's have a conversation with the charts to see where they fit in.

In this daily bar chart of LPSN, below, we have an interesting pattern. Prices rallied over the past year with LPSN making new highs for the move up in late October and early November. That price strength was short-lived as prices gapped lower to close below the cresting 50-day moving average line and nearly touch the rising 200-day moving average line. On an intraday basis prices broke their early October lows, which would be bearish, but on a closing basis we have a different story. On a closing basis support around $34 held. Volume did spike on the gap and the On-Balance-Volume (OBV) line made a small dip. Right now it looks like the dip was temporary.

The trend-following Moving Average Convergence Divergence (MACD) oscillator made a lower high in early November when prices made news highs, giving us a bearish divergence. Now the oscillator is below the zero line, which is bearish, but we could see a new crossover to the upside if prices rally from here.

In this weekly bar chart of LPSN, below. we can see a mostly positive-looking chart. Prices are above the rising 40-week moving average line, which has helped to define the uptrend over the past three years. The weekly OBV line has been bullish the entire time and the MACD oscillator is only showing a take profits sell signal on this time frame.

In this Point and Figure chart of LPSN, below, we can see the price break down because all the intraday extremes have been plotted. Here a potential downside price target of $24 is projected. A trade at $43 probably will be needed to turn this chart positive. 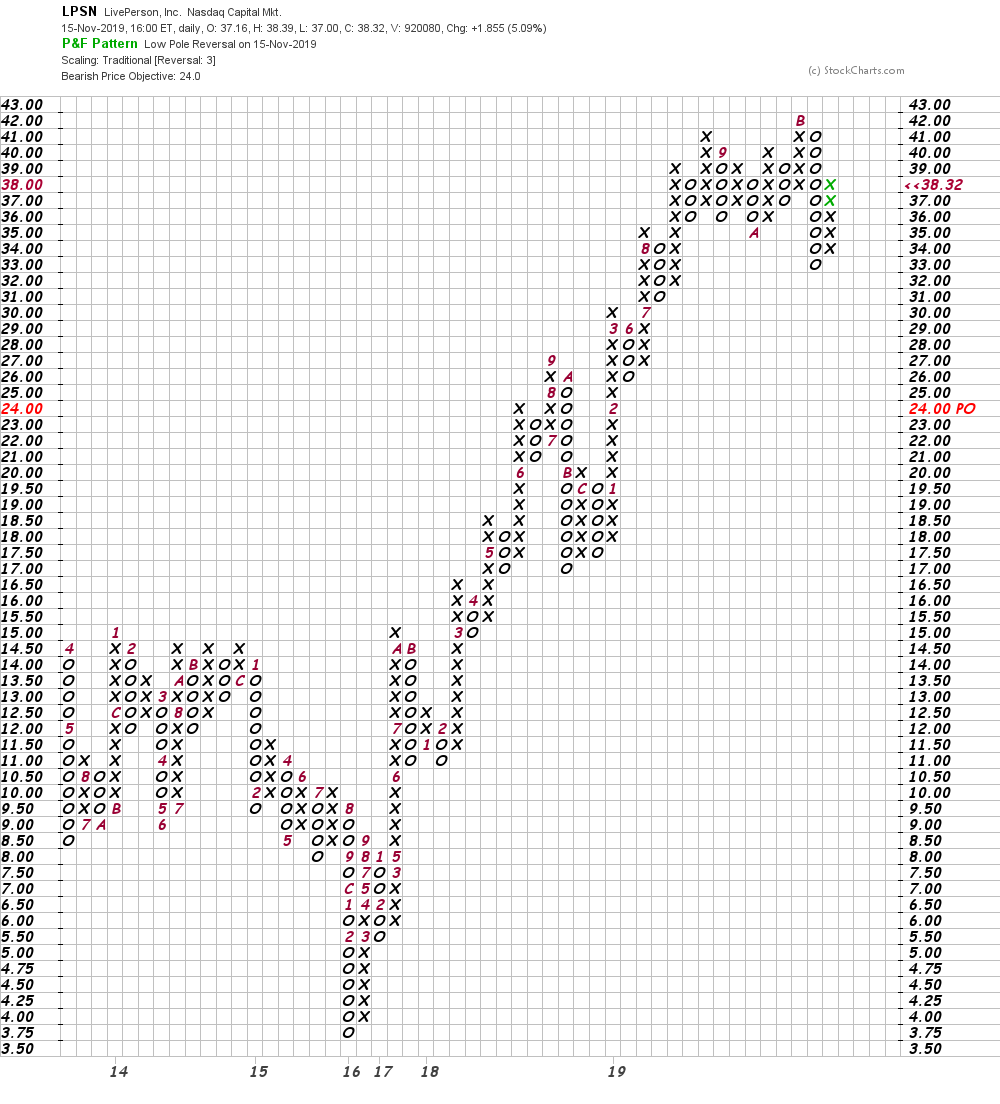 Bottom line strategy: The charts of LPSN are interesting in that we have a sustained uptrend but we do not have a large distribution pattern. The chart did break down this month, but it also rebounded nicely. Aggressive traders could consider going long LPSN on a dip toward $37 risking a close below $33.

Get an email alert each time I write an article for Real Money. Click the "+Follow" next to my byline to this article.
TAGS: Investing | Stocks | Technical Analysis | Software & Services | Technology | Business Communications | E-Commerce | Mad Money | Executive Interview | Real Money