Last week was brutal for index bulls, with the Nasdaq, S&P 500 and Russell 2000 losing between 4.5% and 5.8%. The Nasdaq and S&P 500 broke beneath their near-term support lines, while the Russell 2000 continues to hang on by a thread. From a positioning standpoint, I can't justify pivoting from day trading back to swing trading until price action improves. At a minimum, it would be nice to see more charts that look like stage one bases than stage four bearish continuation breakdowns.

While the major averages and most technology areas look bearish, we can't ignore how resilient the electric vehicle, lithium and solar stocks are.

I'm an advisor to a privately held battery storage solution company that competes with Enphase Energy (ENPH) , so I follow the space closely. With all the news around California brownouts and electric grid failures in Puerto Rico, it's easy to understand why investors are flocking to stocks such as Enphase. But if you don't care to learn about energy storage, just pull up a chart of Enphase and you'll understand why momentum traders are long energy storage. 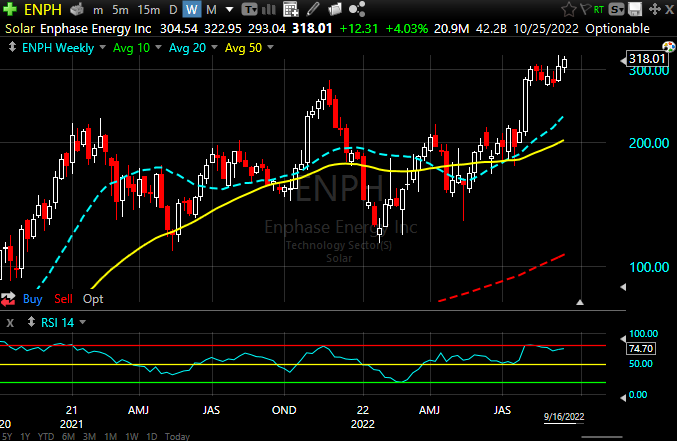 But investors aren't only picking up shares of solar stocks. Companies in the lithium space are also on investors' radars. Names such as Livent Corp. (LTHM) , Albemarle (ALB) , Piedmont Lithium (PLL) and Sociedad Quimica Chile (SQM) are all doing incredibly well.

Based on what's happening in Argentina, demand for lithium, especially from Chinese buyers, is soaring. I have a client scheduled to drill a production lithium brine well in Argentina in a few weeks. According to the project geologist, Chinese buyers are all over them and anyone else nearby trying to secure off-take agreements or acquire any asset that shows promise.

But again, if you don't care to learn about the fundamentals of lithium, just look at the charts. While it's impossible to know how far the bull market in lithium will extend, buyers don't appear ready to back down.

And then there's the electric vehicle market. While the charts of Nikola (NKLA) , Proterra (PTRA) and XPeng (XPEV) look terrible, buyers aren't giving up on shares of Tesla (TSLA) and Rivian Automotive (RIVN) . I'm not rushing out to buy TSLA because the stock looks like it might be stuck between $300 and $200 for quite some time. But as long as it holds above $200, it's hard to be bearish. And on Rivian, while I don't care for the design of the trucks, I'd be interested in the stock on a high volume break above $40.

Get an email alert each time I write an article for Real Money. Click the "+Follow" next to my byline to this article.
TAGS: Investing | Stocks | Technical Analysis | Trading | Metals & Mining | Renewable energy | Technology | Real Money | Electric Vehicles