We discussed the uptrend line in the Dow last week. Needless to say it finally broke on Friday. If you use just lines on the chart - not necessarily how I view the market, since I prefer indicators to lines - you can see the bottom of support now shows up around 34,000.

Yet no one looks at the Dow as you know. They watch the S&P 500. And the S&P 500 has a line as well. The Dow's line goes back to February (so it's longer in duration than the S&P 500) while the S&P's goes back to May. The S&P 500 has five touches on its line, which means it's a good line, too. You can see that after Friday's decline, it is now closing in on the lower line.

The upper line has been a good guide for us since the spring when it comes to pullbacks, so there is no reason to think the lower line shouldn't be good support either even though my guess is the lower line will show up on every screen out there by Monday, if not before. In other words, it is quite obvious, and I prefer when we break a line everyone watches because that creates a better shakeout.

If we look at the indicators instead of the lines, it's a different picture. My own Overbought/Oversold Oscillator is not oversold. I can't make it get oversold either as the math behind it says it won't be oversold until later this week. Notice that it is still hovering just over the zero line for both the NYSE and Nasdaq.

If you prefer a different visual on the oversold condition, then let's use the 'what if' for the McClellan Summation Index. Here we see what it will take to turn the Summation Index from the current down to back up. Currently, it requires a net differential of +1,400 advancers minus decliners on the NYSE. At +2,000, it steps a toe into oversold territory. So here too, it says some more downside would get it to an oversold condition. 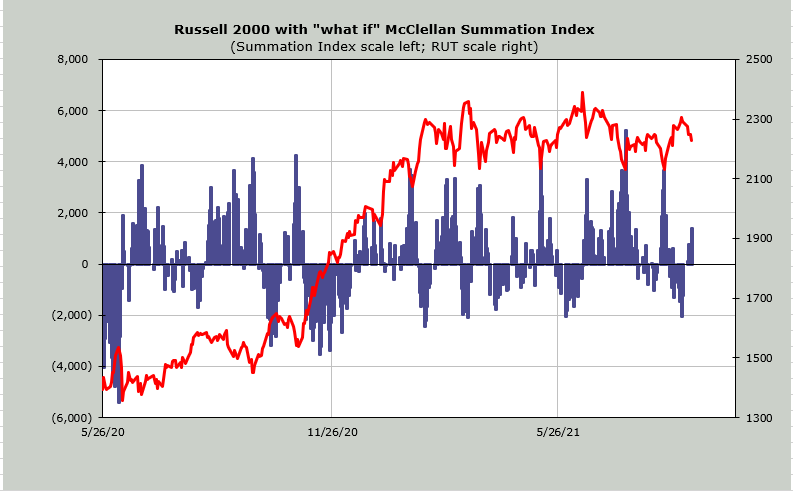 So we have a market that is getting close to support but not quite oversold yet.

The good news is that the number of stocks making new lows is not expanding. Recall most of the summer my complaints were how new lows refused to contract. That is not the case now because last week they sold their beloved mega cap tech stocks, not the stuff that has been down and out.

The other good news? My Saturday Twitter Poll showed 59% looking for more downside for the S&P and 41% looking for upside. In the last 16 months that I have been running this poll, each time the spread was that wide the S&P saw an up week. Twice it began the week on the downside though. That would be my preferred scenario (some more down first) because I'd like to get those indicators oversold. Will the market accommodate me?