Levi Strauss (LEVI) is tumbling about 6% as I write this despite reporting quarterly results that beat analyst estimates. Let's check the stock out.

Digging Through the Closet

My closet still has a couple of pairs of the Levi's jeans that I wore in high school. Wow, were those cool! (And yes, I can still fit into them, you wise guys.)

My Levi's are a bit ragged being as old as they are, but they're still quite durable and I think they're still cool. However, I've strayed from the brand since my high-school days. Price matters and the competition is stiff, so the last three pairs of jeans that I've bought were all Wranglers, while my current jean jacket bears a "Lee" tag.

Both of those brands are now part of Kontoor Brands (KTB) , which VF Corp (VFC) spun off in May. LEVI went public in March after a long spell as a private firm, but neither stock has performed all that well this year.

Still, LEVI is a name that a lot of folks like to root for (at least this guy goes).

Levi's unveiled fiscal third-quarter results Tuesday after the bell, reporting $1.45 billion in revenues and $0.31 of adjusted earnings per share.

That's a three-cent decline in EPS year over year, but we know that apparel has been a tough business. And while net income printed 4% lower year over year due to tax benefits a year ago, LEVI's revenue was actually 4% higher vs. the same period last year.

However, North American sales declined and LEVI acknowledged a $19 million negative impact due to unfavorable exchange rates. That caused gross margin to drop 20 basis points to 53%, whereas margins might have risen 40 basis points had exchange rates been constant. (The company's EBIT margin did manage to grow slightly to 12.2%.)

We can lay the blame for LEVI's lower North American sales at the feet of its wholesale business. Problems were primarily due to a reset for the Dockers brand, which made the quarter tough as far as that business was concerned.

That said, Levi's affirmed expectations for 5.5% to 6% revenue growth for its full-year North American wholesale business. The firm's direct-to-consumer business also grew 9% in North America and is expected to be a strong performer going forward. So is LEVI's women's line and its international business.

Overall, my thought is that despite the market's negative reaction, LEVI's results weren't really bad at all, while management's forward guidance looked reasonable.

Cash is higher, receivables are higher and the firm responsibly makes allowance for doubtful accounts and doesn't overly rely on goodwill to balance the books.

Short- and long-term debt are also under control, while LEVI's current ratio looks fine. (This means the firm should have no problem paying its bills even without counting inventory.)

Speaking of inventories, those were 5.8% higher for Levi's during the latest quarter, but I don't see that as a problem. Nor am I concerned about cash flow from operating activities, which basically flat-lined but was up a smidge. 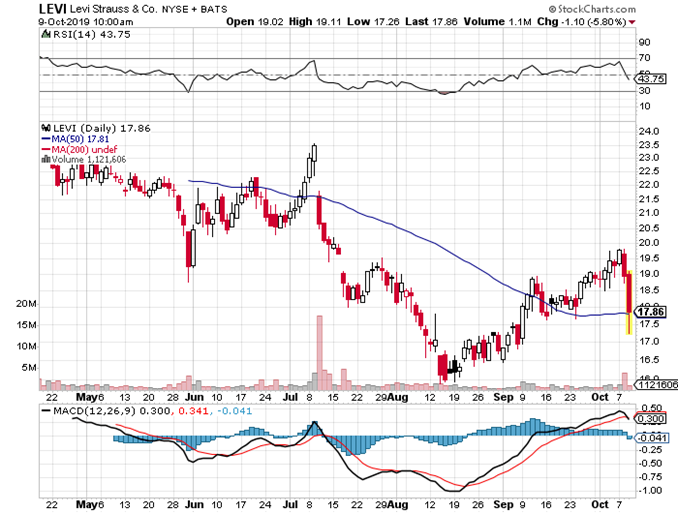 But look at LEVI's 50-day simple moving average (the blue line in the main chart above). That's important, because LEVI's float is majority owned by funds in aggregate. Should the 50-day SMA fail to hold, it wouldn't surprise me to see some forced selling given that the stock is just about three weeks past its Sept. 17 IPO-lockup expiration.

Add it all up and my take on LEVI is mixed.

On one hand, the company is a slow grower, but its 3.4% dividend could be interesting. If the market offers an increased discount from here -- let's say, a test of LEVI's roughly $16 low back in August -- I could see taking an entry-level-sized position in the stock.

Similarly, while January $16 puts are trading very thinly, they might be worth selling if you can get a $0.75 sale price.

(This column has been updated.)

Get an email alert each time I write an article for Real Money. Click the "+Follow" next to my byline to this article.
TAGS: Fundamental Analysis | Investing | Markets | Stocks | Apparel | U.S. Equity | Stock of the Day

The Media Influences You…to Your Detriment