There was that moment on Friday. You all heard it. Then you saw it as well. A heavy cloud cover parted, allowing something odd to happen. Sunshine. Investors had not felt the warmth of optimism in quite some time. Better than cotton candy at the circus? Hard to say. Cotton candy really isn't that good when you stop to think about it, but last Friday's action sure felt nice.

One can thank Federal Reserve Chairman Jerome Powell, who promised nothing, except maybe to be more flexible in the experimental withdrawal of experimental monetary policy. I suppose coming on the heels that morning of an extremely strong batch of December employment data put to the tape by the Bureau of Labor Statistics that investors could not have asked for more.

On that report, though, I did find one thing odd. Did anyone else happen to notice that while the nation celebrated the 312,000 jobs that the establishment survey showed for job creation, the household survey only showed creation of 180,000 jobs? The disparity between the two is not really all that unusual. However, the household number landing precisely on the consensus expectation for Non-Farm Payrolls is noteworthy, in my humble opinion.

So now we have a central bank that acknowledges the marketplace enough to at least take the current trajectory for normalization of policy off of auto-pilot. Equity markets? The S&P 500 stormed back to levels not seen since Dec. 19, or the day that Powell made use of that unfortunate phrase in reference to balance sheet management (the Fed's quantitative tightening program removing $50 billion per month from money supply).

In a further nod to the marketplace, Powell also allowed that the link between wages and inflation is a loose one. The failure of this expectation in particular, as well as the Philips Curve -- the expected inverse relationship between the unemployment rate and inflation -- has been a tough one for classically trained economists (Powell is not, by trade, an economist) to learn in practice.

All market participants now are looking for follow through on Friday's action. There was evidence of such as Asian markets proceeded through their regular session. Since then, European markets have stalled a bit, as have U.S. equity index futures. Whether Friday's trade will be perceived in the end as a turning point or just another algorithmic overshoot largely will depend on the trade talks that began here on Monday morning between U.S. and Chinese vice-ministerial delegations in Beijing.

The positive vibes headed into these meetings are that both the Chinese and U.S. economies (obviously outside of labor) appear to be experiencing a slowdown in the pace of growth. The fact that Chinese Vice Premier Liu He attended Monday's talks might be an indication that the Chinese side enters with the intention of getting something accomplished.

What do I think? My thoughts are that there is enough low-hanging fruit for both sides to walk away without giving away the store, so to speak, but also with enough wiggle room to show the necessary progress to perhaps hold off on the next leg in the escalation of this trade war.

Promises, or perhaps just "progress," will be made in fields such as agriculture that will help reduce the open sore that is the trade deficit for the U.S. However, once talks turn to technology, crimes against intellectual property rights and national security matters, it will become a much tougher game. These matters will drag on long term, perhaps very long term. How the marketplace interprets this, I do not yet know.

Who Let the Dogs Out?

Earnings season does not begin in earnest until late next week. However, there should be a plethora of corporate news headlines made this week.

Kicking off on Monday in San Francisco and running through Thursday will be the JP Morgan Healthcare conference. For the uninitiated, this is the big event for this space annually. I would think that we'll hear something in the wake of the just-announced Bristol-Myers Squibb Co. (BMY) acquisition of Celgene Corp. (CELG) , not to mention directional updates from the likes of CVS Health Corp. (CVS) and Walgreen Boots Alliance Inc. (WBA) . Literally scores of biotechs will be looking to be heard as well, as will big pharma's attempt to justify recently announced price hikes.

If healthcare's big event were not enough, CES, or what older folks like myself refer to as the "Consumer Electronics Show," will begin on Tuesday morning and run through Friday in Las Vegas. The fact that both Verizon Communications Inc. (VZ) CEO Hans Vestberg, and AT&T (T) Communications CEO John Donovan will deliver keynote addresses would imply significant coverage concerning coming 5G technology and its implications. Other high-profile speakers will include IBM Corp. (IBM) Ginni Rometty and Advanced Micro Devices Inc. (AMD) CEO Lisa Su. I would think that we'll also hear from the automotive space regarding the development of that industry's autonomous future and the implementation of artificial intelligence.

Digging Out From Under

While the CES extravaganza officially may not begin until Tuesday, the posturing already has begun in the City of Lights.

Nov. 15, 2018. For investors who had placed faith in former GPU (graphics processing unit) champ Nvidia Corp. (NVDA) , it was a day that will live in infamy. A day where we found out what we had expected all along, but did not want to believe -- that demand from miners of cryptocurrencies indeed had been significant to Nvidia's growth and had now gone cold.

This weekend from Vegas, Nvidia CEO Jensen Huang announced the new GeForce RTX 2060, now the latest GPU based on the new-ish Turing architecture. What's significant about this new chip? Basically, that because this GPU is priced lower than Nvidia's first three Turing-based offerings at $349 retail, it has the potential to reach tens of millions of gamers globally. The reduction in performance in terms of giga-rays per second and ray-tracing is way beyond my scope. For more info on that, read Eric Jhonsa here.

The thing I care about is the potential for Nvidia to correct itself, and thus for the stock price to recover somewhat. Nvidia considers the new chip more than adequate for the mainstream crowd and still 60% faster than previous generation chips. This new product is expected to be available on Jan. 15.

Don't forget that Huang himself, who is generally upbeat, indicated back on Nov. 15 that existing inventory supplies could take half a year to correct -- thus the severe reduction in revenue guidance. NVDA, now trading at less than 19x forward-looking earnings, will report its fiscal fourth quarter in early February.

As close followers likely know, I came into those Nov. 15 earnings short NVDA $180 puts that expired the next day, and being both confident in my abilities as a risk manager and born a stubborn Irishman, I took delivery instead of just covering the puts at a substantial loss. My stubborn defiance may have been a bit brash, but to let the folks who still doubt just how useful a tool the sale of related options can be in the implementation of risk management, I have been aggressive in my attempt to repair this position ever since.

I started out that Friday making sales of both calls and puts expiring in January 2021, then taking profits in those options when those profits presented themselves, drawing in not just the strike prices but also the expiration dates on each swing in order to reduce the beta of the options exposure as well as my equity risk.

Nearly two months later, the work is not done, but options roll-outs are now down to a weekly exercise where scalps are taken like clockwork every seven days and my net basis on this position (which you know started out at $180) is now just above $149. Yes, I am still down, but I also know what I am trying to do here, and the loss, if forced upon me by possibly being called away one of these Fridays, is now just the cost of doing business instead of being nearly catastrophic. 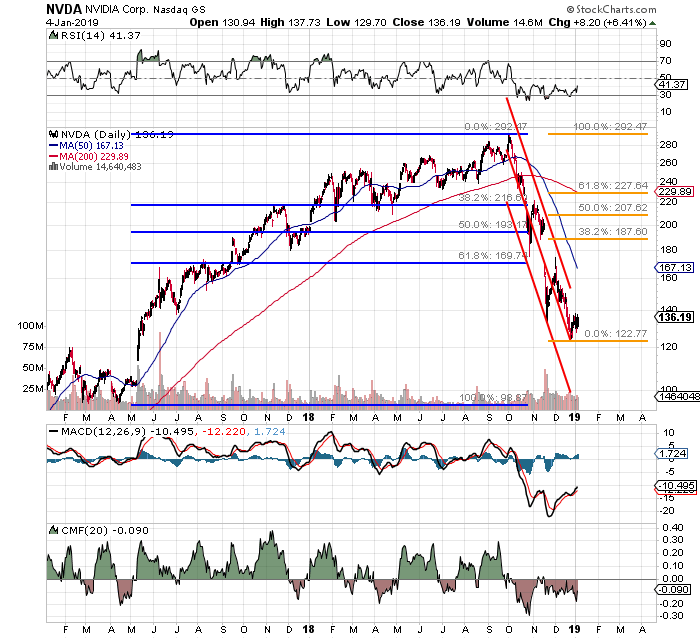 The first thing that I see upon studying Nvidia's chart is that while relative strength and money flow remain weak, the daily moving average convergence divergence (MACD) has turned for the better, with the nine-day exponential moving average (EMA) actually turning positive. The stock's fall from grace was simply too violent for the use of a Pitchfork model to define trend, so I simply used a Raff Regression to illustrate that decline. The most positive takeaway I see here is that if the late December low was indeed a bottom for this name that is highly exposed to China, the 12th-century Italian mathematician would see this name return to the $180s.

In all honesty, I really do not see that as likely in the short to medium term, and look forward to turning at least some of this long position into cash once I'm either at or close to breaking even.