Well, at least we can say it was a relatively interesting day in the market.

Breadth improved, but it wasn't as good as it should have been with the S&P 500 up nearly 50 and the Russell 2000 joining the fray. But it was the best breadth we've seen in weeks. It wasn't enough to turn the McClellan Summation Index from down to up. That would require another day of really good breadth.

Aside from that, there wasn't much to note statistically. What we did see though, sentiment-wise is as we expected, the Investor's Intelligence bulls backed off even more. They are now at 47.6%. Two weeks ago they were kissing 60%, so there has been quite a turn in sentiment. The last time the bulls were this low was October. They were just under 45% in August. I put this on the positive side of the ledger. 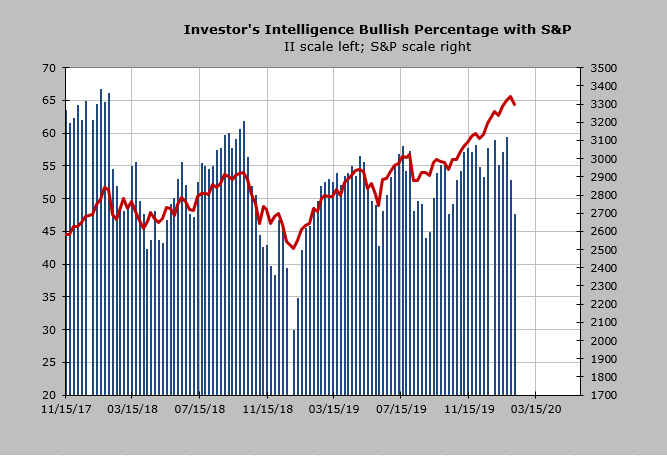 Sticking with sentiment, I want to note that the Daily Sentiment Indicator (DSI) for the Volatility Index (VIX.X) is back at 15. If we get a few more days up that is likely going to fall under 10, which might just give us another push down. Remember, up and down is my expectation. So far all we've gotten is the up from the oversold condition.

Clearly, the chatter was all about Tesla TSLA once again. As I said before, I won't know when the end is, but a few weeks ago, in mid-January when the stock ran from $500 to $600 (blue arrow on the chart) I said I thought the stock was getting into a parabolic move. You might recall I compared it to Apple (AAPL) , which folks were convinced had gone parabolic but I disagreed. Tesla I thought was getting there. It has obviously since exploded into a parabolic move.

It might be hard for you to imagine, but that 20% move in a week in Tesla is obviously more explosive than Microsoft's (MSFT) has been over the last week. But MSFT is up about 13% in a week. To me this is what the Tesla chart looked like a few weeks ago.

I think they are very different companies, but I promised to report to you if I saw other stocks starting to move like this was 1999 and Microsoft is verging on it. Remember it hasn't done anything wrong -- that uptrend is very much intact -- but I am on the lookout for charts that have a nice up-sloping pattern and then all of a sudden start to go vertical.

Get an email alert each time I write an article for Real Money. Click the "+Follow" next to my byline to this article.
TAGS: Investing | Stocks | Technical Analysis | VIX | Automotive | Technology |

The charts of the payments giant suggest there is further risk ahead, so check your cost basis and take appropriate action.

It's clear that the market infection from the Wuhan pneumonia is only just beginning.

Markets Struggle to Price in the Unknown Impact of Covid-19

Bounce buyers want to believe there is an overreaction to the virus news, but if downside momentum builds, the selling can continue much longer than many expect.

Jim Cramer: 3 Market Storylines Are In Play, But Which Is Best for Investors?

Only one of these scenarios is going to get you in and out of this market with your assets intact and your portfolio stronger.