Stocks making new lows have gotten a lot of attention these past few weeks, so let's take a step back from the day-to-day to understand why the new-lows indicator matters and how we might best use it.

When that number of new highs begins to contract, it is an early warning sign that the buying has become more discriminate. Some might say that too little discrimination and we have too much speculation in the market. That is sometimes true. In fact it is often the point where "enough is enough."

Take a look at Nasdaq's new highs. That peak over 700 in early February was a sign of too much speculation. The lower panel is the Russell 2000 fund (IWM) . We know that Nasdaq itself is controlled by a handful of stocks, so using the Russell is more indicative of what stock pickers see.

That peak reading of just over 700 new highs morphed into a correction as the market was clearly euphoric and having too much fun at the party. Now take a look at March. The IWM went on to a higher high and there were just shy of 500 new highs. That's when the party thinned out; it's what we call a negative divergence. And as you can see from the IWM chart, that was the end of the rally for the next six months. 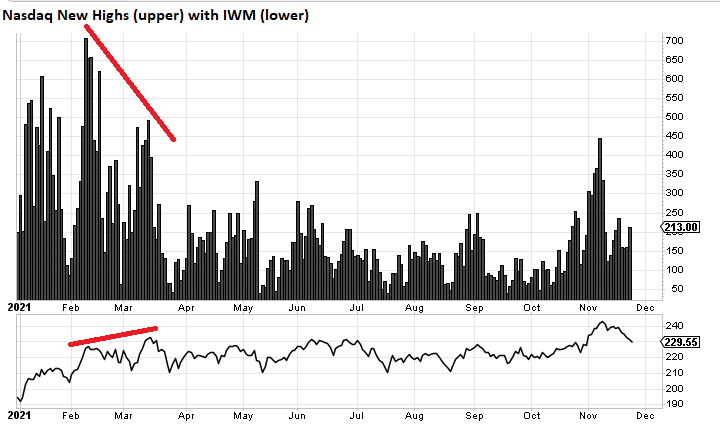 If we step back we can see that even the most recent rally to a new all-time high couldn't match the enthusiasm folks had for stocks earlier in the year. Earlier in the year I believe we saw the internal speculative bubble of the market pop. Biotechs were hot, special purpose acquisition companies (SPACs) were hot, crypto was hot, tech stocks were hot, non-tech stocks were hot. And then someone took away the punchbowl. The party hasn't been that good since.

What you can see is that typically we get a super high reading of new highs (or new lows) and we back off and come on again and it begins to dwindle after that. The buying is not as enthusiastic. It starts drying up.

New lows are no different. In downturns they grow slowly, until they crescendo as well. New lows began to spike in early March's decline. They spiked even more in late March, notching up over 350 new lows. Notice how mid May saw IWM take yet another trip down to the March lows but this time, new lows couldn't even get over 250. That is the drying up of selling, a positive divergence. IWM enjoyed a rally from mid-May until late June. 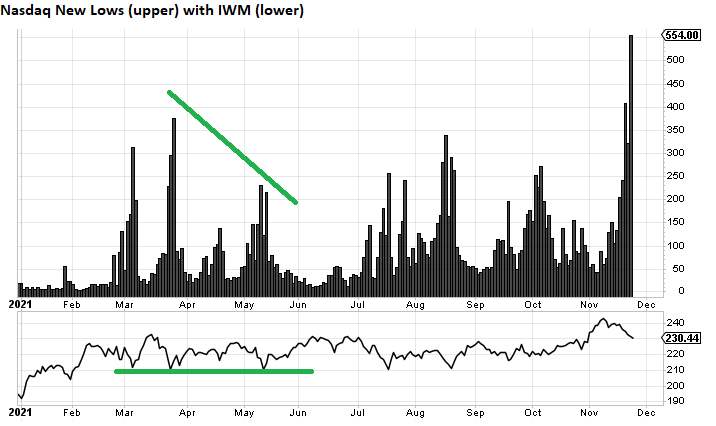 Now take a look at August and September. IWM once again took a trip down to $210, but the new lows in August did not get up and over 350, as they did in March. While IWM did not reach $210 on a closing basis in September/October, you can see the new lows were continuing to notch in at lower readings than 350 new lows. Again, that means the selling was drying up. And then we had a terrific rally into early November.

What we have in the market now is an extreme in new lows. Can it be the inverse of what we saw in February with new highs? Perhaps. It's just quite rare for it to happen without the major indexes coming down. What ought to happen is that we see an extreme reading, we rally and then come down again, and on that second trip down we see if new lows contract. We watch to see if the selling is drying up.

It doesn't always work so neatly, wrapped up in a package. Sometimes there is just a crescendo that never gets retested and the selling just dries up as we rally. But more often than not, we need to see rising new lows contract before the market feels OK again. Just like fewer new highs is what we need to see before we feel the market is getting dicey.

These charts show the retests many weeks later. Sometimes they come within days of each other. But there is a reason we focus on new highs and new lows because it tells us how much risk folks are willing to take on -- or off.