By STEPHEN GUILFOYLE Sep 17, 2019 | 11:46 AM EDT
Stocks quotes in this article: AMZN, FDX, UPS, WMT, TGT, COST
Every name we look at is thought provoking. Express delivery services companies are no different. Especially in the e-commerce era of Amazon ( AMZN) and the like. And, especially as so many questions swirl regarding current and future economic growth. FedEx ( FDX) is such a name, and that name reports Tuesday night. After the closing bell at 11 Wall St., consensus view is for adjusted earnings per share of $3.16 on revenue generation of $17.06 billion. Should those figures be realized, they would be good for an earnings loss of 8.6% year-over-year on nearly flat revenue growth. That would be for this firm a third consecutive quarter of contracting earnings on a fourth consecutive quarter of decelerating sales growth.

The most significant headwinds pressing on performance for FedEx have been twofold -- at least. One is slowing global economic growth, exacerbated by the trade war between the U.S. and China. The other is the painful relationship between the firm and e-commerce giant Amazon. Amazon, having long taken steps to bolster that firm's own delivery services, may compete in the long run with the likes of FedEx and key competitor United Parcel Service ( UPS) .
FedEx, in response to this pressure, elected not to renew the contract for air delivery between the two in June, and then allowed the ground delivery contract to expire at the end of August. Cut off one's nose to spite one's face? Maybe. Unless, this makes FedEx not only more available, but perhaps, a more desirable, dance partner for Amazon's competition. Think Walmart ( WMT) , Target ( TGT) , and Costco ( COST) .
In addition, there has been constant pressure by all corporate clients to reduce shipment times, on top of what has seemed like semi-regular troubled quarterly guidance.

The stock appears somewhat inexpensive at 10.6-times forward looking earnings. UPS trades at more than 15 times. Why the divergence? For one, according to the most recent data that we have (UPS does not report for another month), UPS has executed better in my opinion, if operating margin to include the direction that this margin is moving as a measure of corporate execution. Both firms seem a little over-indebted for my taste, though, both pass the Current /Quick Ratio litmus test.
UPS in the most recent quarter showed signs of rebounding, in terms of trajectories for earnings and sales growth, and UPS pays a far more attractive dividend relative to share price.
All this negativity aside, it would not surprise me in the least, should FedEx surprise to the upside this evening. After all, the analyst community has been ratcheting down these expectations for three months. The short-term market reaction will rely upon the conference call. Investors need to hear more on the just-announced price increases (up 4.9% for U.S. domestic, up 5.9% for freight) that go into effect next year, as well as on the involvement -- if any -- of activist investor Bill Ackman who it was reported in August had taken a stake in the firm.

What I see here are two stand-apart items that tell different tales. In blue, one sees a year-long descending triangle that the stock is breaking out of. The thin red line that basically runs along the series of lower highs that have plagued this name is the 200-day simple moving average. Portfolio managers (not to mention their algorithms) will notice, if in response to earnings, the shares either take or hold that line. That response will decide whether or not this name has truly broken out. 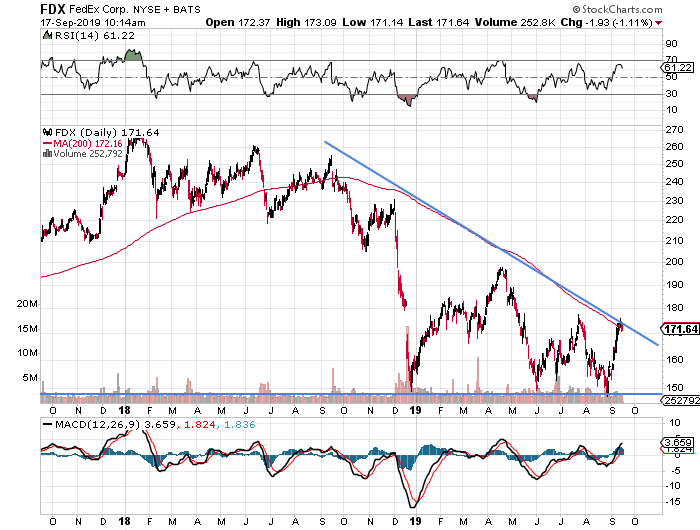 Trade war-related headlines aside -- because longer term, they are what matter here -- the shares could run as far as the high $190s on a positive reaction to earnings. A bit of distasteful guidance, and I think we know where the bottom is for now. The high $140s have been tested three times now. I am, however, thinking the upside might be worthy of an options play. I am not throwing equity at this name just yet.

A Trader Could (in minimal lots)...

( Amazon is a holding in Jim Cramer's Action Alerts PLUS member club. Want to be alerted before Jim Cramer buys or sells this stock? Learn more now.)

Get an email alert each time I write an article for Real Money. Click the "+Follow" next to my byline to this article.
TAGS: Earnings | Investing | Stocks | Technology | Stock of the Day | Earnings Preview