Let's begin with the very thick blue line on the S&P 500 that we looked at a week ago. Why? Because many have asked what level that is at. Let's call it 3700. Let's also note that I use very thick lines. The reason is because the book I consider the bible of technical analysis, John Magee's and Robert D. Edwards' "Technical Analysis of Stock Trends," said we should use a 3% rule. That means that the line needs to break by 3% to believe the break is real.

Since 3% in this current market is approximately 100 points give or take, call it a range down to 3600-ish.

However, I am still focused on the upcoming oversold condition. The 30-day moving average of the advance/decline line is set to get oversold midweek next week. Two weeks ago it was still hovering at the zero-line. It entered this week at -200. It now stands at -330. In May it got to -500 and at the Covid lows it was at -600. Based on the math behind the indicator, I think it gets to a good oversold condition next week.

My own Overbought/Oversold Oscillator is finally coming back down as well. I expect it will be back to an oversold condition midweek next week as well.

The Volume Indicator is at 47%. It too should get oversold (low 40s) sometime next week.

The number of stocks making new lows is rising but what I will be watching for is if the S&P gets down to the June lows, will new lows triple from here? Because that is what it will take to get more new lows than we saw in June. 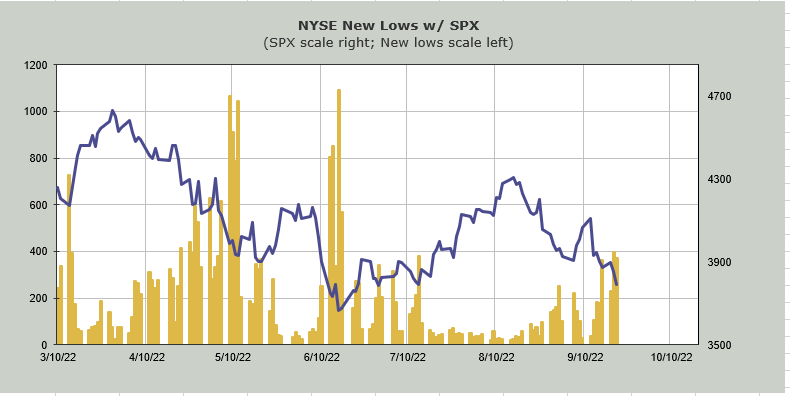 I do expect we will see new lows rise some more but I do not think they will triple. 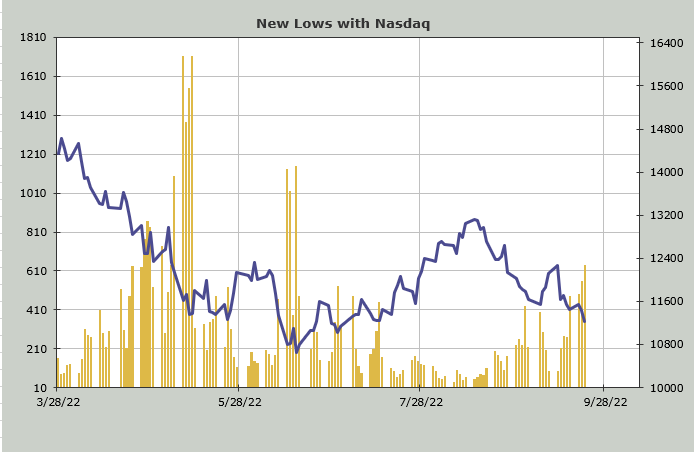 I want to also note that bonds rallied and while everyone seemingly all of a sudden is keen to buy short-term Treasuries I would note that for the first time since mid-June, the yield on the 30-year closed lower than the yield on the 10 year. I am not a bond maven so I don't know the implications, but I do know that is a change. This 3.40% area on the 10 Year Yield is first support. Let's see if that can be broken.

Finally there is sentiment. The Investors Intelligence bulls have fallen to 30%. That is four points higher than the spring low, and down from 44% in August. The bears have not risen much, though. They reside at 31.4% where they were 44% in June. But the bulls have surely pulled in their horns.

I still think we should rally by early October.