AutoZone Inc. (AZO) crushed fiscal third-quarter earnings expectations with a GAAP earnings print of $29.03 a share. This beat the street by more than three bucks on revenue of $3.87 billion. That sales number also beat consensus and was good enough for year-over-year growth of 6%. Domestic same-store sales for stores open at least one year increased 2.6%.

Commenting on the results, AutoZone Chairman and CEO Bill Rhodes said, "We are very proud to report solid same-store sales growth on top of last year's remarkable 28.9%. Both our retail and commercial sales performance exceeded our expectations this quarter. While our commercial sales growth accelerated to 26%, our retail sales also remained healthy considering the tough comparison from a year ago."

While on the surface readers will see a stellar quarter, there are some less positive internals within this report that may temper your enthusiasm for the AZO shares, which initially traded higher after the open Tuesday morning but had given up their gains less than an hour into the session. Let's explore.

Inventories increased 13.9% over the same period, which is difficult to value in this environment. Net inventory (defined as merchandise less accounts payable) on a per-store basis dropped to -$216,000 from -$167,000 for the same period last year.

During the quarter, AutoZone opened 24 US locations, bringing the number of total domestic stores to 6,115. It also opened four locations in Mexico and three locations in Brazil, bringing the number of stores in those nations to 673 and 58, respectively. AutoZone's stores average 6,673 square feet globally, and sales for the quarter averaged $83 per square foot, up from $81 for fiscal third quarter of 2021.

AutoZone ended the quarter with a net cash position of $263 million and current assets of $6.25 billion. Remember that growth in inventories? Inventories make up $5.31 billion (85%) of that $6.25 billion in current assets. Current liabilities amount to $8.06 billion. That leaves AutoZone with a current ratio of 0.78, which is rather unacceptable. We usually don't do quick ratios for retailers as there is a necessity to maintain in many cases large inventories.

I think the value of inventoried auto parts in 2022 might be somewhat unpredictable. On the one hand, dollar values will fluctuate as the consumers' position weakens in a slowing economy. On the other hand, individuals may be hanging on to aging vehicles longer, which would support valuation. Therefore, I will not hold a microscopic quick ratio against AutoZone, but the current ratio has been damaging enough. Did I mention that AutoZone has total debt of $6.06 billion on the books, which is greater than cash and inventories combined?

The company executed well this past quarter. The stock trades at 16x forward earnings. That balance sheet is gross, though. I don't think I can get past that -- too much nose holding to be done. 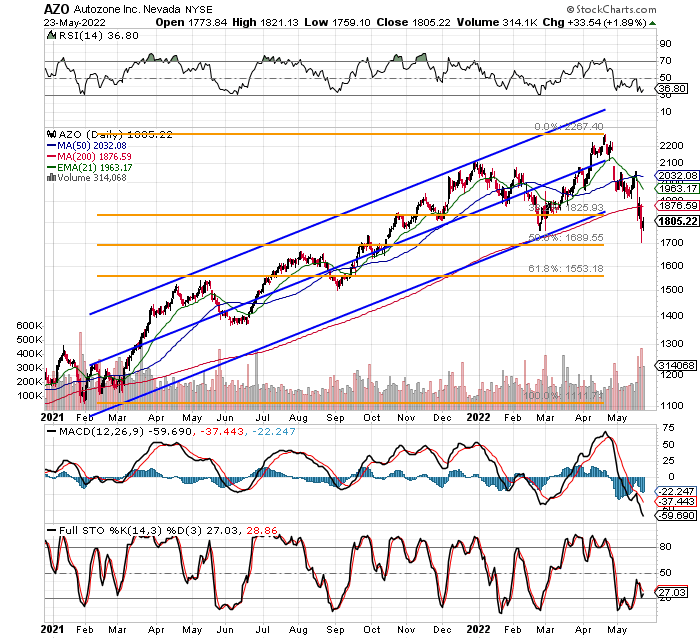 Readers will see that I think the shares going into earnings had been close to oversold after losing a more than one-year-long uptrend. AutoZone's performance provided some relief. I see that the stock managed to find some support at a rough 50% retracement of that entire uptrend last week after already losing its 200-day simple moving average ($1,876) a few days prior.

The shares need to retake that line in order to accomplish anything. It will be interesting to see if and where portfolio managers who sold the stock last week show interest today.

I think if I can get the "just after the opening" price of $1,840 or higher that I would rather be short this name than long going forward. I don't have the wherewithal to babysit a short position in a four-digit stock that might take weeks to play out, even if that four-digit stock comes with a beta of just 0.92. That said, a June 10 $1,840/$1,830 bear put spread can be had for a net debit of $4. Prices and levels may be different by the time you read this, but you get the idea.

Get an email alert each time I write an article for Real Money. Click the "+Follow" next to my byline to this article.
TAGS: Earnings | Fundamental Analysis | Investing | Options | Stocks | Technical Analysis | Automobile Components | Retail | Real Money