For three-straight days -- the three days that the math behind my Oscillator said the market should pull back -- the S&P closed at or near the low. Two of those days it gapped down and did not regain much, if anything, during the trading day. Yet, I did not hear one person on television say this was capitulation.

We've seen a lot of selling. There was a ton of selling in April and more again in the last few days. Does it look like capitulation? I don't know. It sure looks like selling, especially when the volume on the New York Stock Exchange and Nasdaq was the highest on Monday in a month (mid-May). Also, there was 98% of the volume on the downside on the NYSE. Nasdaq had 85%, which for Nasdaq is pretty high, too.

Everyone seems to think this capitulation they are searching for would be bullish, but I would say if you look at a chart of the S&P the plunge in January looks like a mini-capitulation, as does the late February one. March looks like a retest, so it looks different, and May looks capitulatory, too. And if all of those do, then surely the last few days does, doesn't it? But in bear markets such plunges act differently than they do in bull markets.

In bull markets it's a clean-out, a reason to move higher. In this bear market, it's a short-term low. The market has bounced off this line during every flush this year.

It's a bear market. You know it. I know it. We've known it for a while. The media just decided to call it one after Monday's action, though. But was there anything good in Monday's plunge?

We are very short-term oversold. I don't think it is a great oversold, but it is a minor oversold. And for all the naysayers on breadth, look at the chart, breadth (blue line) still hasn't broken to a lower low whereas the S&P has.

Even the Russell 2000 is holding up better than the big caps. The closing low for the Russell 2000 in May was 1718. Monday's close was 1714. Some might say just use a thicker pencil. I would say that the number of stocks making new lows reflects this. 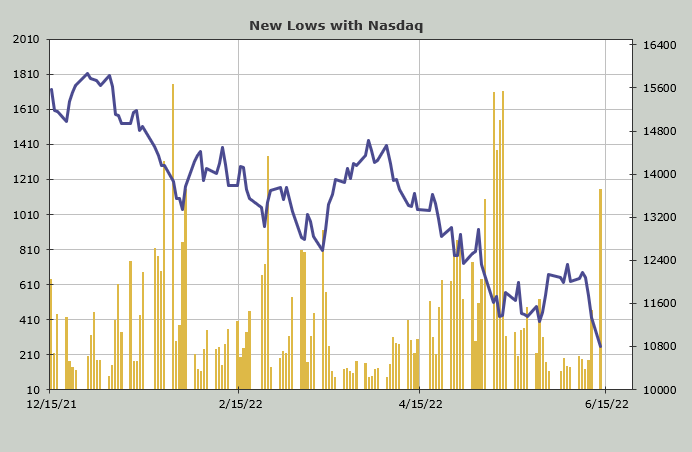 Let's stop here, and make a point about new lows. In a bull market, fewer new lows is a positive, full stop. In a bear market it is a statistic that we need to see repeated for months on end, because that's how bases are built, when stocks refuse to go down time and again. So, it is a short-term positive and ultimately a longer-term one, but the market reactions are shorter on the upside in bear markets.

Moving on sentiment is pretty darn gloomy. The put/call ratio was 1.32, which is quite high. The Daily Sentiment Index (DSI) is now 7 for Nasdaq and the S&P. It is also 7 for Treasury bonds and Treasury notes. Can it go lower? Sure, but it's like shorting a single-digit stock, it's not the best risk vs. reward to bet against it.

I will finish by noting that we should bounce, but the intermediate-term indicators are either already overbought or will be by late next week. The set up is different than it was in mid-May. Do not fall in love with your stocks.