The long version? Brand names such as Pop!, Mystery Minis, Dorbz, Pint Size Heroes, Rock Candy, Galactic, SuperCute, MyMoji, Loungefly, and last but not least... Hero Plushies. Why did I name them all? Because I have no idea which ones are more popular.

Why have I heard of this company? Not because I collect action figures, bobble heads, plushies or other. I knew about Funko because Zev Fima, one of Jim Cramer's rising financial superstars over at Action Alerts PLUS, has been touting this name all year. Was I smart enough to act on his advice? Of course not. Last time I make that mistake.

The company reported second-quarter adjusted earnings of $0.25 per share, a very solid beat on revenue of $191.2 million. Revenue was also a significant beat, as well as good enough for year-over-year growth of 37.8%. Adjusted EBITDA improved 61% to $31.4 million.

The only negatives I see are not really negatives, just things to keep an eye on. For one, gross margin declined by 90 basis points to 37.2%. This is understandable, in my opinion, as Funko spent an additional $7.1 million on bolstering its payroll through salary and other compensation. The other is really just an over-reliance on one product category. Sales of collectible figures came to $159.7 million, or 83.5% of all revenue generated through the quarter. The apparel, the plushies, and anything else that might be rolled up into "other" accounted for the balance.

Oh, one more thing, and this is a biggie.

Management has shown great dexterity in managing itself around the trade war. You might think a company such as this would need to import manufactured goods from cheaper labor markets, and you'd be right. Funko made clear Thursday night that it does not expect to be seriously impacted by tariffs placed upon Chinese imports.

Just eight months ago, the company manufactured 50% of its goods in China. By the end of this year, it expects 70% of all of its manufacturing to be done outside of China, while the majority of this work is already done in Vietnam.

First off, I don't consider the stock expensive. Earnings growth has been fantastic (six figure %) for six quarters. Sales growth is consistently between the low-twenties and the high-thirties in percentage terms.

It's like clockwork. FNKO trades at 17.5 times forward-looking earnings, and this is very interesting. Apparently, fans of these movies and video games love these collectibles. Traders, however, must hate them on a level approaching insane. Out of an entire float of only 11.4 million shares, as of mid-July... 4.31 million shares were held in short positions. That's 37.8% of the float, gang.

Buy these shares today? No way. Some of these shorts are going to feel the squeeze today. 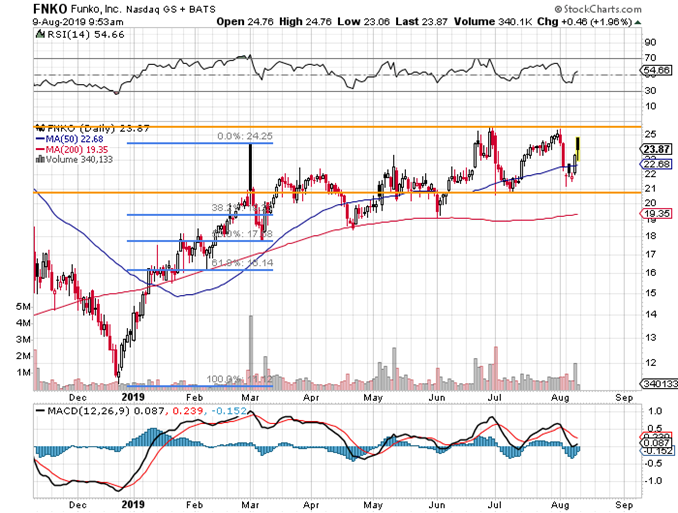 The level to watch is $25.50. You can see in the chart above that through the late 2018 selloff through the subsequent rebound, this name strictly adhered to basic Fibonacci levels, implying at least some algorithmic control. Several months later, we have the stock still mired in a period of consolidation (in orange) that has lasted since at least early June.

I believe that if FNKO can eventually take $25.50, that it can go to $29-ish. Downside risk is not major as the name should not be highly exposed to trade news, and there is established support at $21.

Note Two: Options related to FNKO are somewhat illiquid. The trader will have to work to get these valuations. That's more likely, in my opinion, to be an issue for the $22.50 puts. Simply hitting a bid could result in adding $0.75 of more to net basis.