Investors searching for income should look no further than the amusement parks, Jim Cramer told viewers Monday night during his Mad Money program, where Six Flags Entertainment Corp. (SIX) pays 5.7% and rival Cedar Fair L.P. (FUN) pays a stellar 7.1%. But which is the better stock?

While investors may have given up on these names, both parks have been posting solid earnings that makes their bountiful dividend yields very attractive. Of the two, Cramer gave the edge to Cedar Fair, based on valuation and Six Flag's international exposure, which makes it less appealing than its domestic rival.

Grab some snacks at the concession booth and let's look at the charts and indicators as we stand in line for the next ride.

The daily On-Balance-Volume (OBV) line has been in an uptrend from late March and supports the rise in prices with signs of aggressive buying. The Moving Average Convergence Divergence (MACD) oscillator recently moved above the zero line for an outright go long signal.

In the weekly bar chart of SIX, below, we can see that prices are above the bottoming 40-week moving average line. The $60-$64 area looks like it might act as resistance.

The weekly OBV line shows a decline from May but the bigger picture has been positive the past twelve months. The MACD oscillator is below the zero line but quickly moving up to the underside of the line.

In this Point and Figure chart of SIX, below, we can see a potential upside price target of $66 being projected. 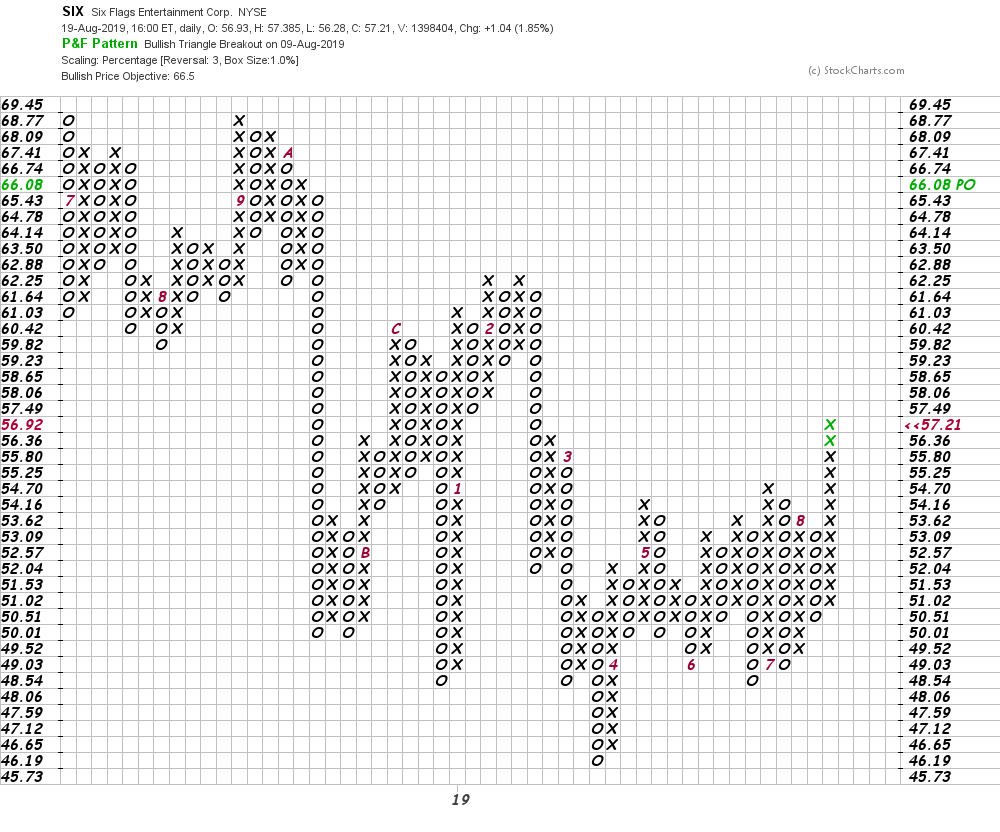 In the daily bar chart of FUN, below, we can see a long sideways consolidation pattern. Prices are above the bottoming 200-day moving average line and the rising 50-day line.

The trading volume increased significantly this month and the OBV line has risen smartly to a new high suggesting that buyers of FUN have been more aggressive. The MACD oscillator is in a go long mode above the zero line.

In the weekly bar chart of FUN, below, we can see a one-year consolidation pattern and prices are now above the flat 40-week moving average line.

The weekly OBV line has turned up in recent weeks but it still needs to break out over the highs of earlier this year. A weekly close above $56 should be a clear breakout.

In this Point and Figure chart of FUN, below, we can see an upside price target of $59. This is not much of a price objective with FUN around $53-$54 but it will mean a breakout over $56 and probably further gains. 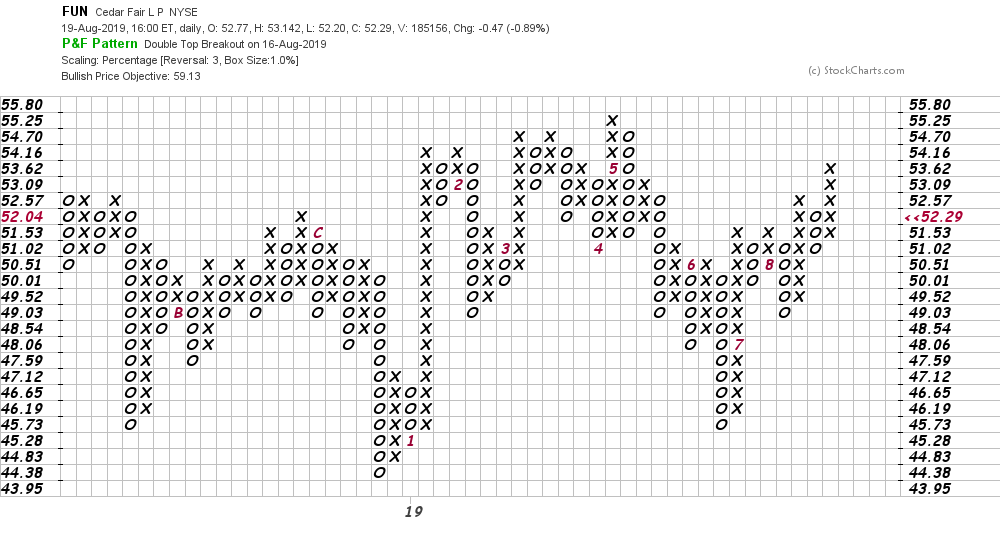 Jim Cramer and I are on the same page with FUN being more attractive. FUN has a bigger base formation and once it breaks out over $56 it should have more upside.

Get an email alert each time I write an article for Real Money. Click the "+Follow" next to my byline to this article.
TAGS: Investing | Stocks | Technical Analysis | Food & Drink | Resorts and Hotels