Snee explained that Hormel saw strength in all of its iconic brands, such as Spam, but also in many of its lesser-known brands.

When asked about the strength in items like peanut butter, Snee said peanut butter has always been a staple in American households, but Skippy continues to innovate with squeezable products, no-added-sugar products and even peanut butter with extra protein.

Let's check out the charts of HRL.

We last reviewed the charts of HRL on March 19 and wrote that, "Someone just showed you a bullish set of charts and indicators. Will you consider going long or will you stay bearish because you see so many other stocks that are weak? It is a market of stocks and not a stock market is the old saying. I would approach HRL from the long side, risking below $47." We also gave a target in the $75 area. Dramatic swings would have stopped us out but the uptrend did unfold.

The On-Balance-Volume (OBV) line has been rising since early May and is bullish. The Moving Average Convergence Divergence (MACD) oscillator turned bullish at the end of March but is now rolling over to a take profits sell signal.

In the weekly bar chart of HRL, below, we can see that prices have traded higher the past three years. HRL is trading above the rising 40-week moving average line.
The weekly OBV line is pointed up but has yet to make a new high to confirm the new price highs this year. The MACD oscillator is still bullish but starting to narrow.

In this Point and Figure chart of HRL, below, we used daily price data. Here the chart suggests the $64 area as an upside price target. 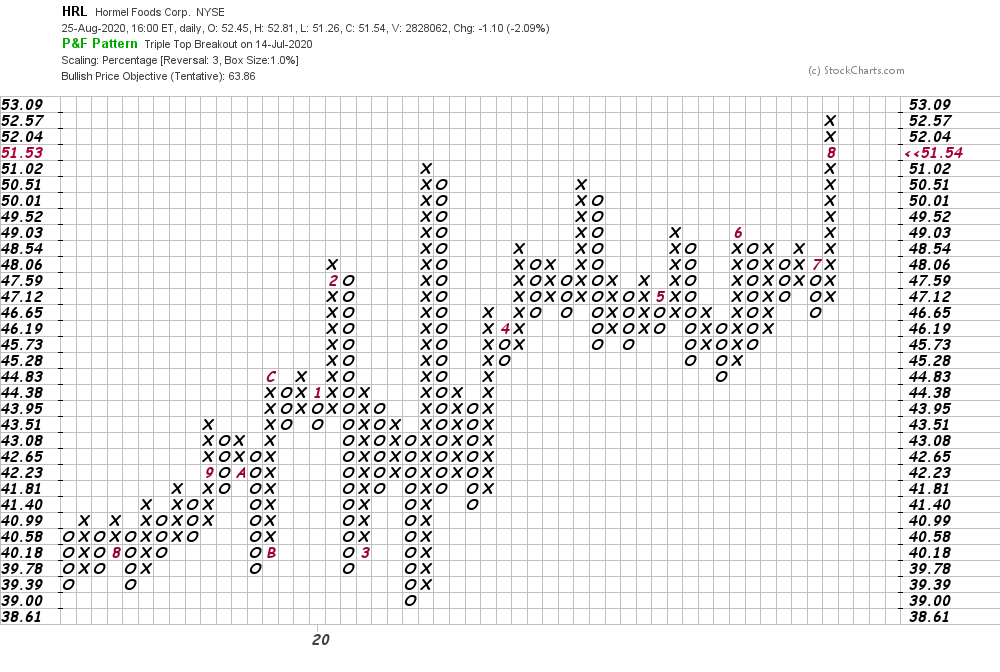 Bottom-line strategy: Overall the charts of HRL are OK. Not blast off strong. HRL could correct sideways for a while but the longer-term patterns suggest further gains in the months ahead.
Get an email alert each time I write an article for Real Money. Click the "+Follow" next to my byline to this article.
TAGS: Earnings | Investing | Stocks | Technical Analysis | Food & Staples Retail | Consumer Staples | Mad Money | Executive Interview