Reuters made a big splash on Friday with its hard-hitting expose on Johnson & Johnson (JNJ) . The accuracy of the report is being called into question by many on Wall Street, along with the company itself, but the damage to the stock price in the short-term is certainly not in question.

Over the weekend, I had the chance to get out to a few neighborhood functions. While talking with folks, I brought up the Johnson & Johnson story several times in the course of different conversations. Not a single person had heard the story except for one person who works in the financial markets. In other words, I'm not sure how widespread this story is resonating outside of traders and investors.

I was certain a scan of social media would find folks screaming for torches and pitchforks, but again, I found very little in my network of friends. I'm getting the notion the only perception problem here may be a Wall Street one. Until we see a Boston Talc Party with consumers dumping baby powder into the sea, I'm not sure we'll see much in the way of consumer abandonment of J&J products.

That doesn't mean financial risk is off the table. J&J is facing a group of 11,700 plaintiffs claiming their product contained asbestos and caused cancer. If this plays out in court, the burden of proof lies with the plaintiffs, which means they will have to do something that has never been done: scientifically show a causal link between baby powder usage and cancer. If we assume the market cap cut (around $40 billion give-or-take the fast market moves), that works out to around $3 million+ per claimant. Again, possible, but not likely.

J&J did just have a jury in California rule it was not liable in a similar case last month. Add in the thousands of tests done not only by the company, but also tests done by the FDA, global regulators, and independent labs.

Reuters claims this goes all back to the 1970s, possibly even the 1950s. If that's true, then that means the level of fraud, conspiracy, and/or incompetence reaches levels never before experienced in human history. I find it hard to believe. Even more difficult to believe is the selloff. 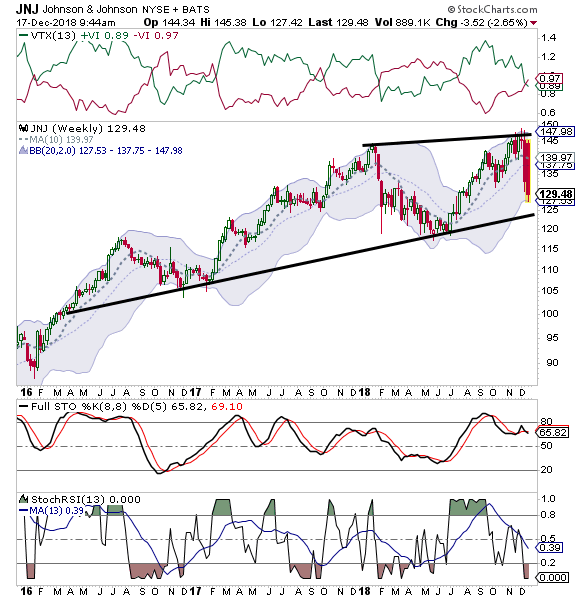 In the bigger picture, JNJ has done nothing more than retrace close to a very long-trending support level that goes back almost four years. I believe that $125 level would be our short-term strong support, although I find JNJ attractive here.

I would approach JNJ with a "buy half" mentality. Buy half a position Monday, then consider adding should it drop into the $105-115 range. Otherwise, simply enjoy a well-timed buy if the stock continues to rise.

Get an email alert each time I write an article for Real Money. Click the "+Follow" next to my byline to this article.
TAGS: Fundamental Analysis | Investing | Stocks | Technical Analysis | Healthcare | U.S. Equity | Stock of the Day