I had someone remark to me that he thought people seemed upset or mean on Wednesday. I considered this as the market closed and I wondered if it is because the entire week the market indexes gap up on the open and then either slowly leak all day or just meander for the remainder of the trading day.

Then I wondered if it is because despite breadth seeming to be good on Monday and Wednesday during the rallies -- and quite frankly as I noted it wasn't even that bad on Tuesday's decline -- overall the cumulative advance/decline line is still lower (blue line) than it was a week ago and two weeks ago, despite the higher high in the S&P (brown line).

Or maybe it is that the increase in stocks making new highs we saw on Monday in the New York Stock Exchange did not increase on Wednesday, despite the higher high in the S&P? Or if we move to Nasdaq, we discover that the peak -- for now -- in stocks making new highs on Nasdaq was almost two weeks ago. Again, this despite a higher high. Heck the new highs failed to surpass Monday's reading.

Think of it like this: You own a stock that made a new high Monday and you sat through Tuesday's roller coaster to the downside and were relieved to see the roller coaster head back up on Wednesday, but your stock didn't make a higher high than Monday -- but the indexes did. I can see why that might make folks upset or at least edgy -- especially when you consider that there has been a strong increase in the bullishness this week.

The put/call ratios have been the lowest this week since January/February. The 10-day moving average of the equity put/call ratio is now just a little bit under where it spent the majority of 2019 and while it's hard to say it is closing in on the January/February lows (there is plenty of room to get to such an extreme), you can see that it is now in the area it was at the highs in the fall of 2018 (arrow on the chart).

I know many will cite the American Association of Individual Investors' poll as still showing too many bears (we'll see if that has changed this week when it is reported Thursday morning), but the Investors Intelligence bulls are now at 49%. That is not extreme (over 55% is extreme), but when there are twice as many bulls as bears (24%) you cannot tell me folks are not bullish. 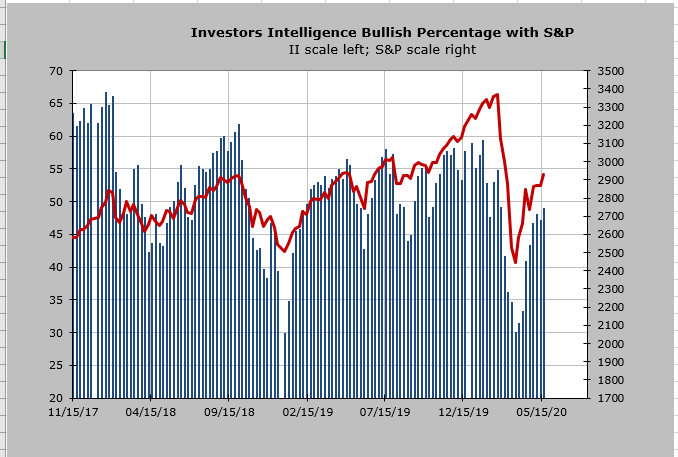 The very well watched 200-day moving average sits right overhead at or near 3,000, which is also conveniently a big round number. Perhaps folks will throw a party if we get over 3,000. In fact, I'd bet money on a huge jump in bullishness if that happened.

In the meantime, I still think the roller coaster of ups and downs continues.