Here on Monday morning, news broke that Lockheed Martin (LMT) and the Pentagon's F-35 Joint Program Office have agreed on an F-35 production rebaseline. This is great news and what we were hoping for, as it would ensure predictability and stability in the production process while also recovering aircraft shortfall realized over the past 18 months due to the pandemic.

Just one thing. Actually, two things. One. The re-baseline is slightly smaller than what Lockheed Martin had projected. Two. This fifth-generation fighter is perhaps the world's most complex, most advanced, most expensive fighter aircraft program. These purchases have to be financed, and fiscal football will be played this week in Washington, D.C. Any room left for defense spending in this environment? One would think so, when looking at the world geopolitically. One might not think so when looking at the nation domestically.

A lot happened last Thursday, to be precise. First, Goldman Sachs four-star rated (by TipRanks) analyst Noah Poponak downgraded Lockheed Martin to "Neutral" from "Buy" with a $402 price target, stating that a pressured budget environment would make it tough for a large, elite defense contractor such as Lockheed to increase sales. While Poponak sees aerospace and defense as a more compelling story in the medium term, the analyst doesn't see a "clearly identifiable driver for accelerating growth or a multiple re-rating." Interestingly, simultaneously, Poponak also upgraded Northrop Grumman (NOC) and General Dynamics (GD) to "Neutral" from "Sell" and downgraded L3Harris (LHX) to "Sell" from "Neutral."

Before the day was out, Lockheed Martin announced that its board of directors had authorized an increase in the quarterly dividend by a cool $0.20 to $2.80 (forward yield: 3.2%) while also authorizing the repurchase of an additional $5 billion of common stock, bringing the total authorization for future purchases up to a rough $6 billion. Timing is at the discretion of management. This dividend payment of $2.80 per share ($11.20 per annum) is payable Dec. 27 to shareholders of record Dec. 1.

Think the feds will need logistical support every year? Me, too. Kind of like the gift that never stops giving from a corporate perspective. Consensus for revenue growth for the third quarter of 2021 is for about 4%, in line with recent quarters, and also in line with future projections. 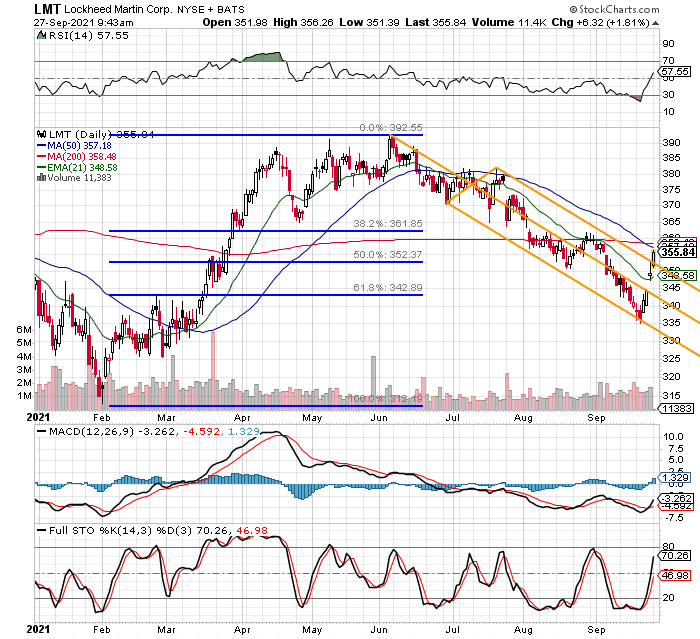 Readers will note that both Relative Strength and the Full Stochastics Oscillator are quite supportive of the stock right now, without being overbought. The daily moving average convergence divergence (MACD), though both the 12-day exponential moving average and 26-day EMA remain below sea level, have crossed over in bullish fashion. In addition, after retracing more than 61.8% of the first-half 2021 rally, the shares here on Monday are breaking out of the downward-sloping Pitchfork that dates back to June.

Does anything here bother me? Sure. That gap in between $340 and $347 created last week bothers me. Congress could still screw up cash flow for companies like this quite easily and this will be a fiscally focused week. Noah Poponak's warning was not misplaced.

My plan is to watch for the development of a new pattern. I expect this rally will produce a handle at some point that makes what you see now look like a cup. I am already long this name. I would love to increase my position in that gap once the algos try to fill it. Earnings are due around Oct. 20. I think maybe selling a $340/$370 strangle for about $4.75 might serve well as long as one is already long the equity.

That would at least knock the increased equity risk down to $335.25 if the shares were to be put to the trader. Of course, that also caps the upside through earnings at $370 plus premiums paid.

Get an email alert each time I write an article for Real Money. Click the "+Follow" next to my byline to this article.
TAGS: Dividends | Investing | Politics | Stocks | Aerospace | Defense | Real Money | Analyst Actions