The chart trends of the major equity indexes remain mixed while the data is generally neutral with the exception of insiders increasing their selling activity. Also of note was the rise in the 10-Year Treasury yield to just shy of resistance as it continued to rise. 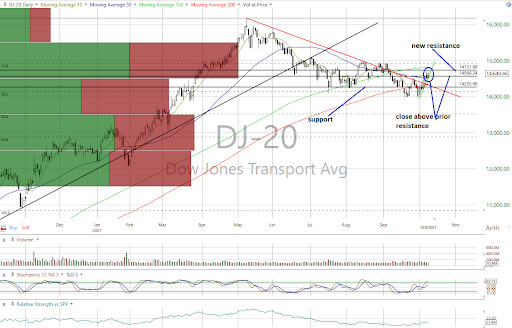 The only index to post a gain Friday was the Dow Jones Transports (see above) as it managed to close above resistance and is now in a near-term uptrend, in our view. The rest posted losses with generally negative internals on the NYSE and Nasdaq on lighter trading volume from the previous session.

With the exception of the Dow Transports, all closed at or near their intraday lows. So, we now find the chart trends positive on the Transports, negative on the Nasdaq Composite and Nasdaq 100 and neutral on the rest.

Cumulative breadth for the markets remained neutral on the All Exchange, NYSE and Nasdaq as all remain below their 50-day moving averages.

The detrended Rydex Ratio (contrarian indicator), measuring the action of the leveraged ETF traders, slipped further to 0.29, the lowest level of the past several months as their bullish expectations have waned from their excesses at the market's highs. As a contrarian indicator, it is an improvement within the psychology data.

The Open Insider Buy/Sell Ratio, however, has changed its tune in the opposite direction and is now in bearish territory as insiders increased their selling activity to a 24.3 reading.

The forward 12-month consensus earnings estimate from Bloomberg lifted to $213.43 per share. As such, the S&P's forward P/E multiple is 20.6x with the "rule of 20" finding fair value at approximately 18.4x.

Of note, the 10-Year Treasury yield rose further to 1.61% and is now just shy of resistance at 1.62%. It continues to suggest higher rates forthcoming that could become an issue for equities, in our opinion. We see support at 1.47%.

Friday's action left our near-term market concerns generally intact. As such, we are maintaining our near-term "neutral/negative" outlook for equities in place.