On Tuesday morning former Sarge fave Home Depot (HD) released its second-quarter results. For the three-month period ended July 31, Home Depot posted GAAP earnings per share of $5.05 on revenue of $43.79 billion. Both top- and bottom-line results beat the street, while the top-line print was good enough for year-over year-growth of 6.5%. Net earnings grew 7.6% over the comparable period last year, while earnings per share increased 11.5%. Gross profit increased 6% to $14.483 billion, while operating income increased 8.6% to $7.21 billion.

The implication of increased revenue and an increased average ticket on fewer transactions? Obviously inflation, but beyond that, is the do-it-yourself homeowner slowing down? Possibly. Professional contractors make less trips to the store and buy more when they're there. This potential drop in actual homeowner demand was the likely reason for pre-opening Tuesday weakness in the shares.

For the full year, Home Depot reaffirmed its outlook for a series of items. Home Depot still sees total sales growth and comparable sales growth of approximately 3%, operating margin of about 15.4%, net interest expense of roughly $1.6 billion, a tax rate of close to 24.6% and diluted earnings per share percentage growth in the mid-single digits.

Home Depot ended the quarter with a net cash position of $1.259 billion, which is down significantly from last year, while inventories stood at $26.088 billion. That was up significantly from a year ago. This brought current assets up to $32.941 billion. Current liabilities amounted to $27.834 billion (in line with a year ago). This left HD with a current ratio of 1.18, which was up from 1.06 at this time last year. That's a significant improvement.

I know we usually don't harp too much on quick ratios for retailers. That said, given that inventories in this environment might be considered subject to potentially evolving valuation, I think we probably should run that flag up just for exhibition. Omitting inventories left Home Depot with a quick ratio of just 0.25. I won't mention how meager that looks, but I will mention that it is down from 0.35 a year ago.

Total assets increased to $75.825 billion, including goodwill of $7.451 billion. No other intangible assets are entered. This is not abusive. Total liabilities less equity adds up to $75.588 billion, including $39.271 billion in long-term debt.

Does this balance sheet pass muster? It does, but it's this >< close to not getting a passing grade. Home Depot needs to whittle down that debt load or beef up its cash position (preferably both), but the bills will be paid and obligations over the shorter to medium term will be met. The size of that entry for inventories is a concern.

So far, I have only seen two sell-side analysts that have opined on Home Depot since these earnings were released. Five-star rated (by TipRanks) Wells Fargo analyst Zachary Fadem maintained his "buy" rating on HD while setting a $350 target price. Also, the four-star rated Jonathan Matuszewski of Jefferies reiterated his "buy" rating on HD as well as his target price of $400.

Home Depot is executing well. Consumer demand is suspect, probably due to inflation. Professional demand appears solid. As the economy moves into or further into recession, my guess is that professional demand potentially ebbs, while do-it-yourself demand rebounds out of necessity. Let's not forget that Home Depot stood by its full-year guidance. The balance sheet is not yet a concern but must be watched. A lot has to do with how well inventory is managed and how effectively it is turned into cash.

I have not been in Home Depot in a while; indeed, I took the entire quarter off from retail. If I were to be interested in returning to some kind of long-side retail exposure (and I am to some degree), Home Depot is where I would start. The equity trades at 19x forward earnings, more or less in line with the S&P 500, and HD pays shareholders a very decent $7.60 per annum just to stick around. That's a yield of 2.26%. 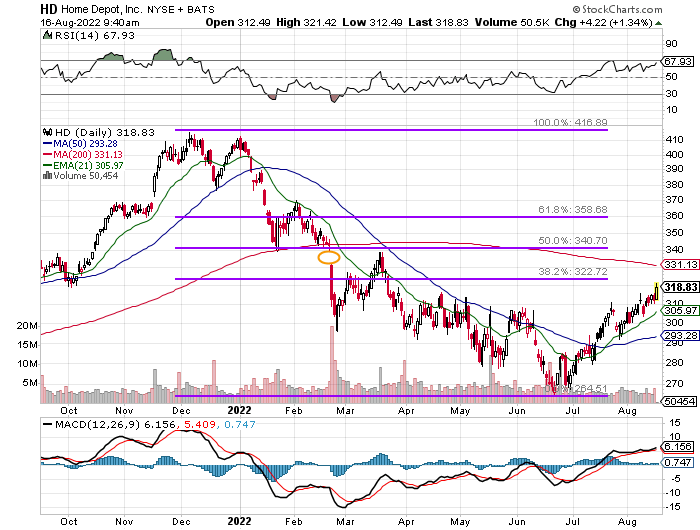 Readers can see that HD peaked last November and sold off 37% though mid-June. The shares since have gained 22% to where they closed Monday night. HD needs to see $323 to complete a 38.2% Fibonacci retracement of the November-through-June beatdown, needs $331 to meet its 200-day simple moving average (SMA) and needs $344 to fill that gap left open in February.

I am more inclined to own this name going forward than to just let it go. Here is at least one way to go about it.

Get an email alert each time I write an article for Real Money. Click the "+Follow" next to my byline to this article.
TAGS: Earnings | Fundamental Analysis | Investing | Options | Stocks | Technical Analysis | Consumer | Retail | Real Money