Oh, sure, everyone wants to talk about stocks.

Here's the one thing they didn't speak of with great fear on Wednesday, the U.S. dollar. I suspect that might be on the table any day now. The dollar is up quite a bit this week and thus far the only chatter I've seen on it is from the currency traders. Surely stock traders will notice it soon, won't they?

I would love it if we saw stock folks focus on the buck, because the Daily Sentiment Index for the buck is at 89. A move up and over 90 would be enough for me. Now, the euro is the largest percentage of the Dollar Index and its daily sentiment index is only 20. But the commodity currencies like the Aussie dollar is at 14 and the Canadian dollar is at 11. So you can see how any currency chatter that finds its way to the stock folks could be the end of the move up for the buck.

The move in the buck has also had a knock-on effect for gold and silver. Gold can't seem to crack to single digits on the DSI, as it sits at 10, but Silver got to 9 on Wednesday.

And stocks? Oh sure, it was disappointing that they didn't rally well, but for all the negative chatter on tech, which was nowhere to be found a month ago, as they were topping out, the mega-cap names mostly milled around. Breadth on the New York Stock Exchange stayed positive for the day. Oh, it's not enough to get the McClellan Summation Index to turn back up, but breadth was not the leader to the downside.

What we have discovered is that folks can look at charts and see how ugly some of those tech stocks are now. I am not a fan of tech in general, and haven't been for quite some time, but I want to remind you that good charts turn bad and bad charts turn good, which is why I pay attention to the indicators. 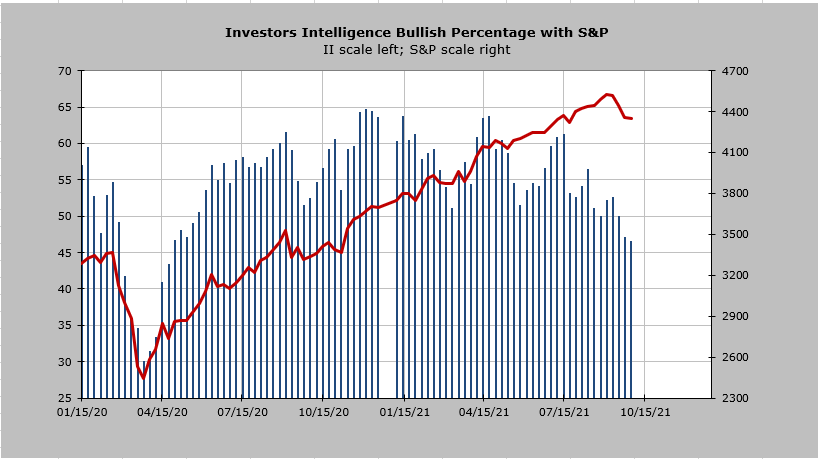 And, right now, the Investors Intelligence bulls are sitting at 46.5%, so they notched down one little point from a week ago. Bears held steady. Thursday we will see what the American Association of Individual Investors and the National Association of Active Investment Managers have done in their weekly surveys. I for one hope to see NAAIM down more than last week.

Get an email alert each time I write an article for Real Money. Click the "+Follow" next to my byline to this article.
TAGS: Currencies | Investing | Stocks | Technical Analysis |