"I'd wait for this one to go a little lower, then buy, buy buy," Jim Cramer told one caller who asked about Raytheon Technologies Corp. (RTX) during the Lightning Round of Mad Money Thursday night.

In the daily bar chart of RTX, below, we can see that prices were more than cut in half in the February-March meltdown. Prices rebounded from the March low and briefly got above the declining 50-day moving average line.

Trading volume was heavy at the March low and even stronger in early April as prices pulled back and then leapt higher. Volume dried up in the later half of April and now prices have begun to pull back. The On-Balance-Volume (OBV) moved above its February high but prices never got close to their February peaks.

The trend-following Moving Average Convergence Divergence (MACD) oscillator got back to the zero line but has narrowed and could cross to the downside soon.

In the weekly bar chart of RTX, below, there is a mixed picture. Prices made a sharp and deep decline this year giving everyone who bought the stock in the past three years a loss. Prices have rebounded but remain well below the declining 40-week moving average line.
The weekly OBV line declined but did not break its late 2018 low like prices did. This is a positive divergence but not one that I would brag about. The MACD oscillator has improved slightly from its worst readings below the zero line but it has a long way to go for a more constructive signal.

In this Point and Figure chart of RTX, below, we used daily price data, which produces a potential downside price target in the $54 area. 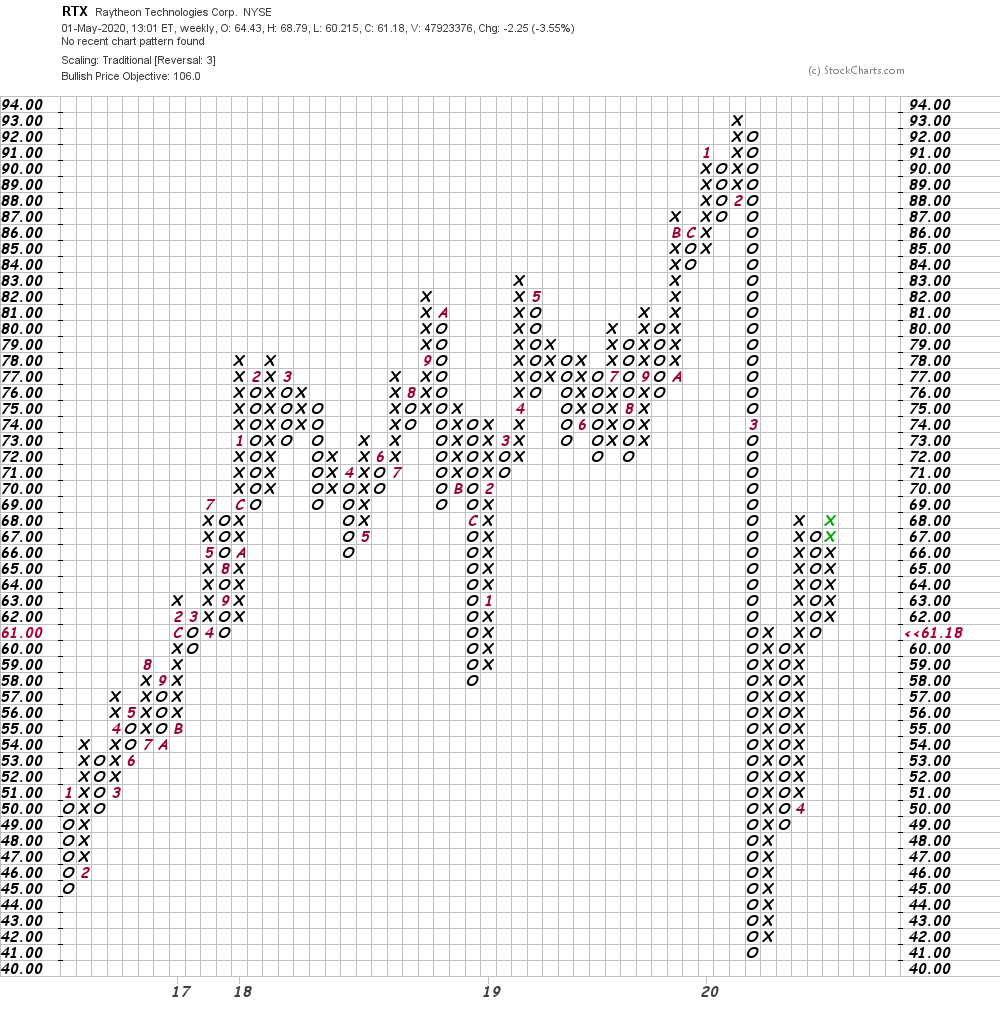 Bottom-line strategy: RTX is pulling back and could pull back further to the $54 area. The pullback might go even deeper so I would be in no rush to become a buyer. Let's wait for some stabilization and signs of accumulation.
Get an email alert each time I write an article for Real Money. Click the "+Follow" next to my byline to this article.
TAGS: Investing | Technical Analysis | Aerospace | Defense | Industrials | Mad Money | Stocks

I'm not sure that access will continue however, given the historical precedent of industry consolidation.

If you own the stock, here's what I suggest you do right now.

SoFi Technologies Could Fall Further in the Weeks Ahead

SOFI's technicals have not gotten the message from the fundamentals.