By STEPHEN GUILFOYLE Jan 14, 2020 | 12:17 PM EST
Stocks quotes in this article: C, WFC, JPM
Yes, JPMorgan Chase ( JPM) did post the firm's highest profit for a full year in history. The quarter was not bad -- in fact it was quite good -- supported to some measure by the firm's ability to trade fixed income as well as equities.
The numbers also compare well against the fourth quarter of 2018, which you may recall was a tough quarter. I came in Tuesday long, some Citigroup ( C) , and long some Wells Fargo ( WFC) -- "What was that?" -- I was flat JPMorgan, until I started tearing apart their numbers. I started to think about the Saul Martinez piece at UBS Group last week. I saw the Doug Kass piece at Real Money Pro Tuesday morning. I shorted a few myself, not large. Just a trade. JPMorgan is still and will remain "best in class." Win or lose, I'll be flat these at some point this week, maybe even Tuesday. Let's check out the digits.

For the fourth quarter, JPMorgan reported earnings per share, or EPS, of $2.57, easily beating the Street. That's 30% growth year-over-year, but actually down sequentially. The firm posted revenue of $29.2 billion, also a beat, and growth of 9%. By segment, in my opinion, the corporate and investment bank was the star of the show, as that is where the traders are. Within that unit, markets and securities services, nearly doubled banking in terms of revenue generation. Again, fixed Income markets posted 86% year-over-year growth, while equities lagged, sporting growth of just 15%.
We'll also have to look at consumer and community banking. As a unit, in aggregate revenues and net income, both showed an annual increase of 5%. Beneath that headline, consumer and business banking and home lending both contracted from a year ago, and were, in a way, bailed out by credit cards, merchant services and auto.
Getting down to the smaller , but not small segments, commercial banking fared less well than it had for the fourth quarter 2018, as asset and wealth management did quite well.

For the quarter, net interest income landed at $14.3 billion, which was down 2%. Tangible book value, which is key to investors, posted at $60.98 per share. A last sale of $140 puts the shares at a rough 2.3-times book. I think that's a little expensive. You may not. For comparison -- and I am talking my own book -- Citigroup at a last sale of $82.48 trades at 1.17-times that stock's tangible book value of $70.30.
JPMorgan returned $9.5 billion to shareholders throughout the fourth quarter, $6.7 billion of that in the form of net repurchases of outstanding shares. At Tuesday morning's prices, JPM still sports a dividend yield of roughly 2.6%. The balance sheet remains fortress-like.

It's in the Cup (and Handle)

You'll note the nicely formed cup-with-handle pattern completed in October with a pivot of $120. Through the application of a 20% premium to that break-out, my first target, if long the shares, which I am not, would have been $144. What that means to me (though break-outs can vary) is that the move associated with the pattern that created it has experienced most of what it had to give in terms of potential. More immediately, the shares need to take and hold the Jan. 2 high, which is getting tested right now. 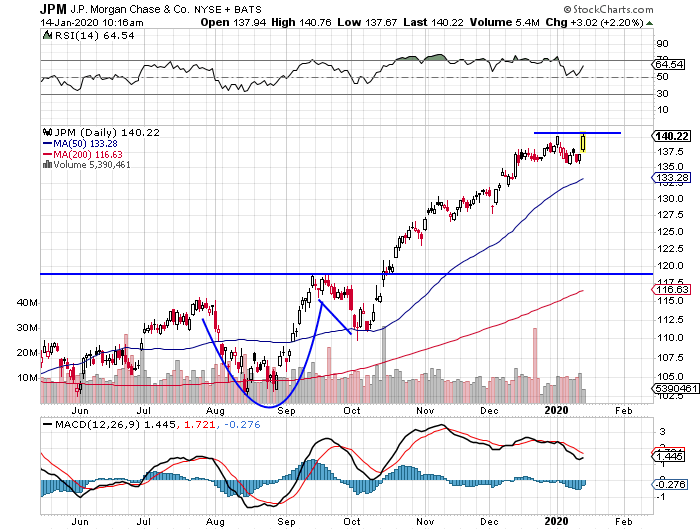 My target on the short is $137. I'll cover it at a loss, if I see the current level as support. Of course, one way to move beyond a level that I think I see as close to fully valued, would be for an expansion in net interest margin. For lay people, the easiest way to track short-term vs. long-term rates is to simply follow the spread between what the U.S. three month Treasury bill and the 10-year Note yield, currently a rough 27 basis points. Oh, the short? As I wrap this note up, it's less than a buck against.
(JPM and C are holdings in Jim Cramer's Action Alerts PLUS member club. Want to be alerted before Jim Cramer buys or sells them? Learn more now.)
Get an email alert each time I write an article for Real Money. Click the "+Follow" next to my byline to this article.
TAGS: Earnings | Interest Rates | Investing | Stocks | Treasury Bonds | Financial Services | Stock of the Day