Lennar Corp. (LEN) , the well-known homebuilder, is due to report earnings later this week. Let's walk through the charts and indicators to see if this name, which earned a mention last Friday from Jim Cramer on "Mad Money," is worth a probe of the long side.

In this daily bar chart of LEN, below, we can see that prices have been in a downtrend the past year. The slower-to-react 200-day moving average line has had a negative or bearish slope since August. The shorter 50-day moving average line has been pointed lower since February and has been tested a number of times the past month. Prices could close above this indicator this week as the indicators have shown some improvement.

The level of trading volume increased in October and November and the daily On-Balance-Volume (OBV) line made a higher low in November versus October. This improvement looks like a shift from aggressive selling to aggressive buying. The trend-following Moving Average Convergence Divergence (MACD) oscillator gave a cover-shorts buy signal in late October and another similar signal in late December. The next move for the MACD oscillator looks like a test of the zero line and may be an outright go-long buy signal.

In this weekly bar chart of LEN, below, we can see a base, a rally and then a return back to the base area in the past three years. Prices are below the declining 40-week moving average line. The weekly OBV line shows a decline from last January and a small uptick in December. The weekly MACD oscillator is close to a weekly cover-shorts buy signal.

In this Point and Figure chart of LEN, below, we can see a modest upside price target of $45.13 being projected, which might open the way for a bigger rally. 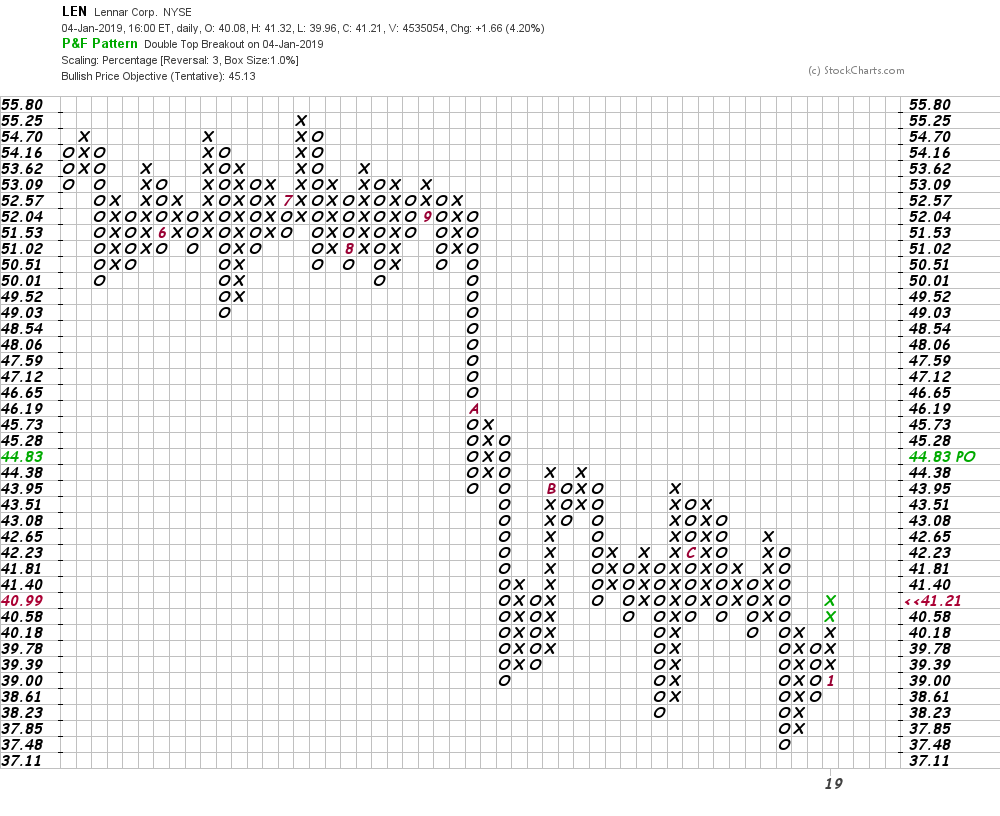 Bottom line strategy: It looks like LEN has made a small base since late October. This could generate a rally to the $45-$46 area, but further consolidation and accumulation is probably needed to support a more sustained rally. Aggressive traders could approach LEN from the long side, risking a new low close.

Get an email alert each time I write an article for Real Money. Click the "+Follow" next to my byline to this article.
TAGS: Earnings | Investing | Stocks | Technical Analysis | Consumer | Consumer Cyclicals | Real Money