By TIMOTHY COLLINS Jun 13, 2019 | 01:35 PM EDT
Stocks quotes in this article: DOCU, LULU
One question I see often batted about by traders, especially newer traders, is why a stock reacts the way it reacts to earnings. For instance, why does one stock get crushed after reporting good numbers, but guiding lower, while another stock will trade flat or even higher on similar news?
While there is no set rule, I've found much of it has to do with expectations and history. While Wall Street analysts have one set of expectations, the market has its own: whisper numbers.
DocuSign ( DOCU) was a stock that recently was hammered despite posting strong numbers. Unfortunately, the results did not live up to the whisper numbers circulating among traders. Additionally, DocuSign doesn't have much earnings history to judge whether guidance is conservative or aggressive.
Lululemon Athletica ( LULU) offers investors a look at the flip-side. On Wednesday, after the bell, the company reported earnings per share of 74 cents vs. estimates of 70 cents. A solid beat. Furthermore, revenue of $782 million crushed expectations of $755 million. Guidance, though, came in light. Management expects second-quarter earnings of 86 cents to 88 cents per share on revenue of $825 million to $835 million. Current Wall Street numbers have LULU pegged for earnings per share of 88 cents on revenue of $834.4 million. Even worse, full-year earnings per share projections from LULU are now $4.51 to $4.58, while Wall Street has them at $4.64.
One wouldn't think these results were strong enough to pop the stock $10, or nearly 6%, but that's how LULU opened on Thursday. The stock has sold off, along with the overall market, but still sits $3 higher. But here's the thing, LULU management has a history of under-promising and over-delivering. It's been so prevalent that the market takes the LULU guidance as a basis to calculate the "real" estimate, often several hundred basis points higher. There's no other way to explain the 10 analysts raising their pricing targets on the stock this morning.
This isn't a knock against LULU or a bearish argument. The company delivered comparable store-sales growth of 14%, a number almost every retailer would love to own. They are recruiting new consumers into the brand. Their loyalty program is generating interest and traffic in the stores. Consumers can now buy online and pick up in the stores. Expanded offerings have the potential to increase the average revenue per guest.
There's a lot to like.
The price action here Thursday will likely cause the week to end in a false breakout on the weekly chart of LULU. We won't know officially until tomorrow, though. While that isn't bearish, it would put us back into the current trading range of $162 to $175. This has been a consolidation channel of trading after the big run higher to start the year. It simply requires a bit of patience for those seeking a long position and wanting a confirmed breakout. A close over $175 is where that would occur.
In terms of historical post-earnings action, LULU tends to be flat to slightly higher over the next 13 to 21 days. The $175 straddle of June 28 appears to be a bit aggressively priced, so selling volatility could make sense. I would still cap any potential loss by adding a long strangle $10-$15 out of the money against any short $175 straddle. The best play appears to be selling a July 5, bullish put-spread. Something like shorting the $167.50 and buying the $162.50 put that both expire on July 5, for a $1 net credit holds appeal.
Overall, LULU gives us the look of a company that is priced based on what it does time and time again, not what it tells us it will do next quarter. If history does indeed repeat itself, then don't be surprised to see LULU in the $190-$200 range before the end of the summer. 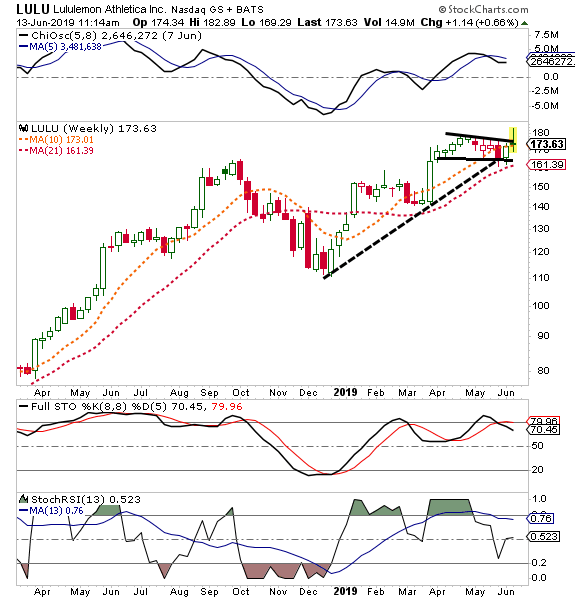 Get an email alert each time I write an article for Real Money. Click the "+Follow" next to my byline to this article.
TAGS: Earnings | Investing | Stocks | Retail | Stock of the Day