This is when I struggle with the market. You see, for me it was easier a week ago. The market hadn't rallied yet. Sentiment was sour. Breadth was improving. But now the market has rallied, sentiment has improved, albeit far from giddy, and breadth faltered on Friday.

Let's start with breadth. Friday saw exactly what I didn't want in the market: an S&P 500 that pushed up by over 30 points and breadth was flat. Should that become more than a one day occurrence it will have an effect on the indicators.

I grant you I said on Friday I wanted to see a down day because I thought we could shake some of the recent bullish chatter, but I didn't want to see breadth stall while the indexes kept going. However, we came into Friday with the McClellan Summation requiring a net differential of net negative 2,700 advancers minus decliners on the New York Stock Exchange to halt the rise in this indicator and we enter Monday with that number at a net negative 2,300.

At plus 2,000, it is oversold. At minus 2,000, it is overbought. So we had stepped a toe into overbought territory (short term) and are still there. In other words, there has been no damage done. Not yet. Should the lack of breadth on Friday become more persistent, it will take its toll on the indicators, but for now it's more like a tiny pebble in my shoe -- annoying but not enough to fuss too much over.

We did see a rise in the number of stocks making new highs on the New York Stock Exchange. They eked out a reading over 200 which is the most we've seen since early September. Notice that the trend since late September has been upward. Should that change it would be a reason to turn more cautious.

On the sentiment front, the 10-day moving average of the equity put/call ratio has rolled over. That's the top line (blue) on the chart. The lower panel is the S&P 500. Lows in this indicator tend to precede corrections and highs tend to coordinate with rallies. Let's watch how fast it falls. 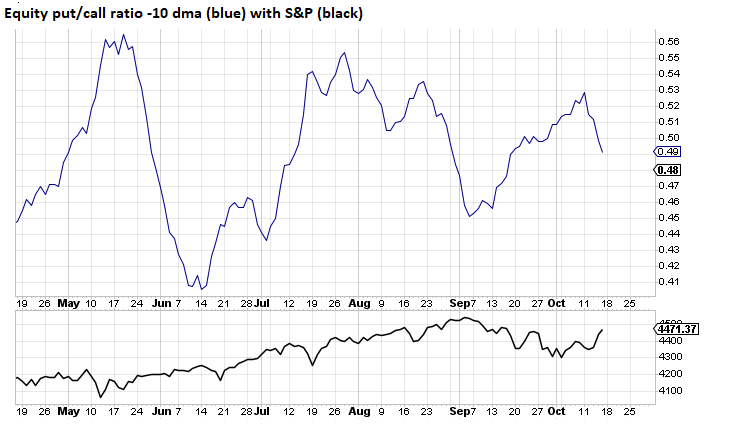 I suppose if you want to be concerned about how fast folks have turned bullish then you can look to my Saturday Twitter Poll where 66% are looking for the next 100 points in the S&P to be up.

The best news on Friday was that the Transports, a group I warmed up to a few weeks ago, broke out of the range they have been in since June. That sideways action measures near the old high. That is what I would expect to see in the coming weeks/months. What I don't want to see is it collapse back under that 15,000 range anytime soon.

In any event, Friday was an Either/Or day in the market, only the concentration wasn't all in mega cap tech but rather in big cap stocks in general. My Oscillator says we should still have a bit of time on the side of the bulls, even if it isn't in a straight line.