Retailer Kohl's (KSS) reported below consensus EPS for the April quarter along with cutting their fiscal 2022 guidance. Key employees have bailed and the company is still for sale. What is a fundamental analyst supposed to make of a hot mess?

Well, this technical analyst will review the charts and indicators here.

In the daily bar chart of KSS, below, we can see that the share price has traded sideways the past 12 months. We can see a number of rally failures in the $60-$64 area. Dips into the $46 area have been bought until Wednesday when KSS gapped lower and broke its October low. KSS is trading below the declining 50-day and the declining 200-day moving average lines.

The On-Balance-Volume (OBV) line has drifted lower this year but not to the extent I would have expected. Trading volume has been relatively light on the decline suggesting that prices are "falling of their own weight." The Moving Average Convergence Divergence (MACD) oscillator is in a bearish alignment.

In the weekly Japanese candlestick chart of KSS, below, we can see that prices are testing the lower end of long sideways consolidation pattern. Buyers have appeared in the $45 area a number of times until now. This could be a "false breakdown" if prices quickly reverse to the upside but it is way too soon to make that argument.
The weekly OBV is in a decline telling us that despite the light volume on the daily barchart (above) sellers on this time frame are being more aggressive. The MACD oscillator is just slightly above the zero line so we could soon see an outright sell signal.

In this daily Point and Figure chart of KSS, below, we can see that prices reached and exceeded a downside price target of $51. 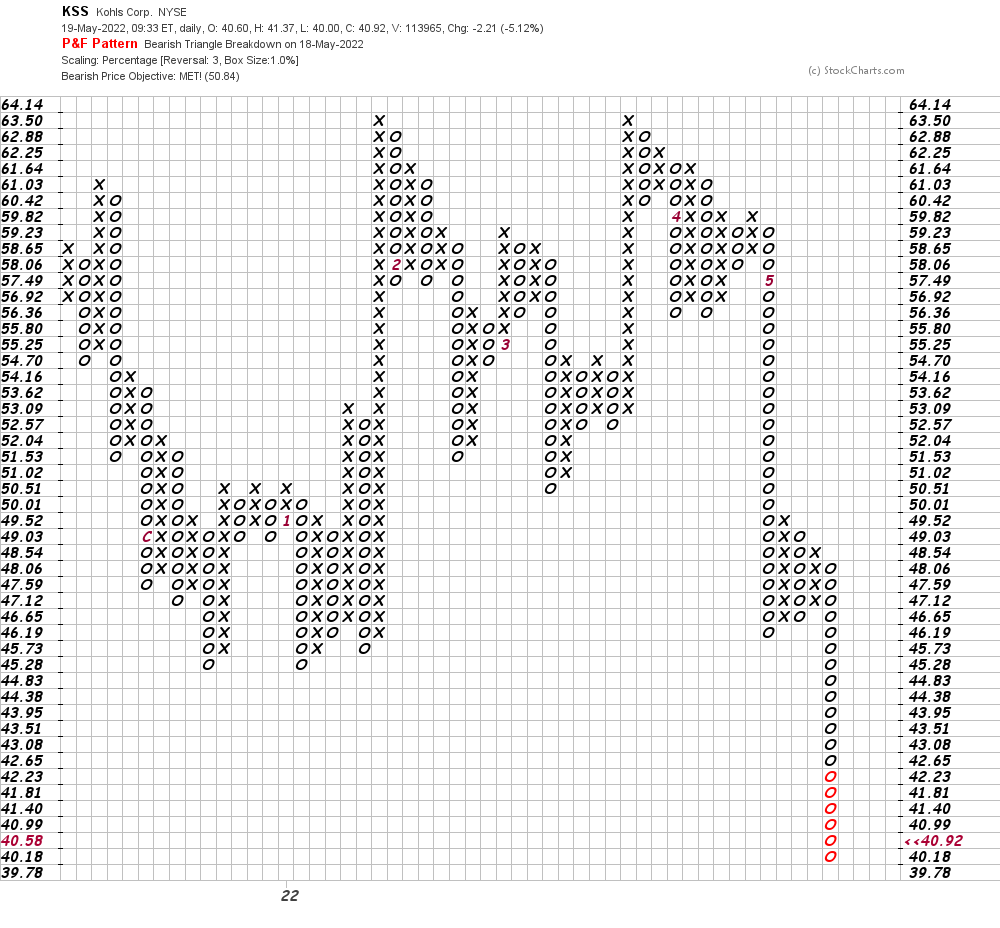 In this weekly Point and Figure chart of KSS, below, we can see that the software is projecting a target in the $19 area.

Bottom-line strategy: KSS needs to rally and close above $50 in short-order to postpone further steep losses. Should this happen it may only be a temporary development and renewed declines may happen anyway. A white knight for the company would obviously change the picture.
Get an email alert each time I write an article for Real Money. Click the "+Follow" next to my byline to this article.
TAGS: Mergers and Acquisitions | Takeover Possibility | Earnings | Investing | Stocks | Technical Analysis | Analyst Actions