Kohl's Corp. (KSS) is down sharply Tuesday morning. Traders are reacting to the downside despite the company edging past consensus estimates with its fiscal third-quarter report. Comparable sales increased 2.5% during the quarter to beat the consensus expectation for a 1.5% rise. But enough about the fundamentals, let's look at the charts and indicators.

In the daily bar chart of KSS, below, we can imagine a gap down lower opening with prices around $63-$62 or so. This puts KSS below the declining 50-day moving average line and below the flattening 200-day line.

The daily On-Balance-Volume (OBV) line shows a peak in early September and it will probably make a new low for the move down Tuesday. The Moving Average Convergence Divergence (MACD) oscillator is in a take profits sell mode and could soon cross the zero line for an outright sell signal.

In this weekly bar chart of Action Alerts PLUS holding KSS, below, we can imagine that the stock will break below the flattening 40-week moving average line. The weekly OBV line has been neutral/diverging for months and the MACD oscillator has been weakening for months.

In this Point and Figure chart of KSS, below, we should see later Tuesday a long string of "O's" down to $62.88 at least. A downside price target of $56.01 is already projected. 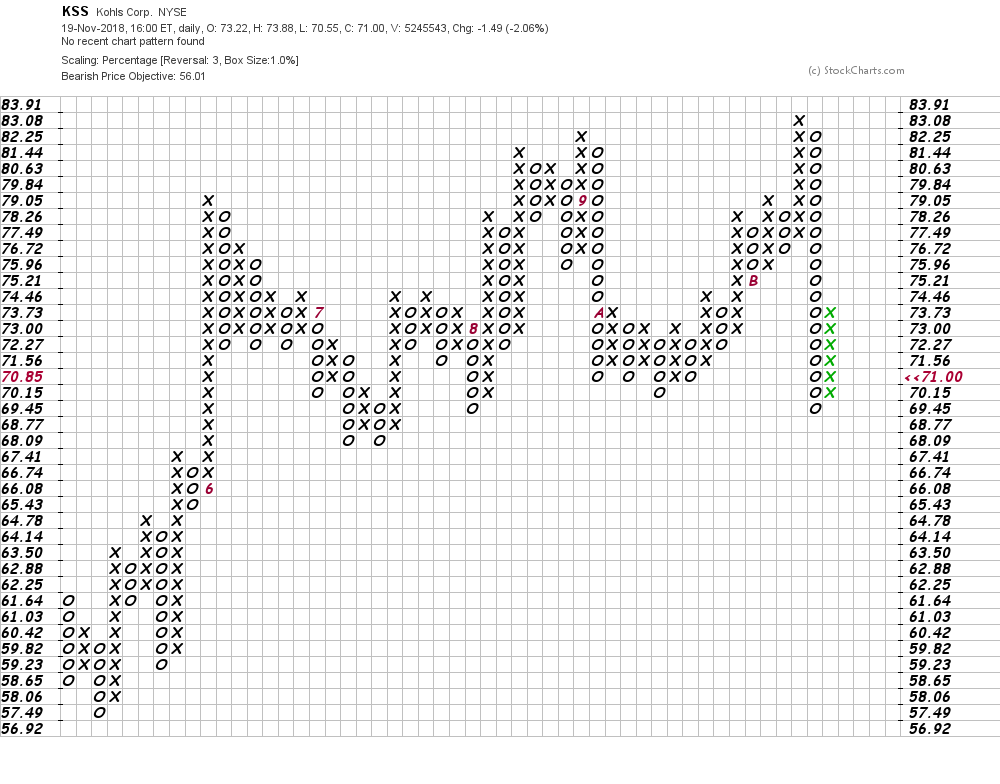 Bottom line strategy: KSS made a top pattern from June and the likely close Tuesday below $69 will generate several sell signals. My downside price target is $55 for now.

Get an email alert each time I write an article for Real Money. Click the "+Follow" next to my byline to this article.
TAGS: Investing | Stocks | Technical Analysis | Stock of the Day