KLA-Tencor Corp. (KLAC) is a leader in the electronics industry; it just closed an acquisition and it has been leading the way up the charts since late December. Speaking of charts, let's see if KLAC can break out over its August and March highs.

In the daily bar chart of KLAC, below, we can see a number of bullish clues and signals. Prices started their fourth-quarter decline earlier than other companies by turning sharply lower in early September. In December KLAC was holding above its October low until late in the month.

Prices closed below the October low for just one day and then came roaring back strongly the next day (technical analysts call this a two-day reversal). By the end of January, KLAC had rallied above its early December peak for an upside breakout. Also, by the end of January the slope of the 50-day moving average line had turned positive.

This month I can see the slower-to-react 200-day moving average line turn positive. Now look at the volume increasing from the late December low. The strong rise in the daily On-Balance-Volume (OBV) line is a strong bullish signal. The OBV line is not only above its December peak, but also well above the highs for all of 2018.

The trend-following Moving Average Convergence Divergence (MACD) oscillator is in a bullish configuration above the zero line and pointed higher.

In this weekly bar chart of KLAC, below, we can see a positive picture. Prices are above the flat 40-week moving average line. The weekly OBV line is pointed up and very close to making a new high.

The weekly MACD oscillator gave us a cover-shorts buy signal in January and is almost above the zero line for an outright go-long signal.

In this Point and Figure chart of KLAC, below, we can see the rally this year and that prices have met a $111 price target. Reaching a price target is not a reason to sell. A weekly trade at $121.25 could open the way to longer-term gains in the $160 area (details not shown). 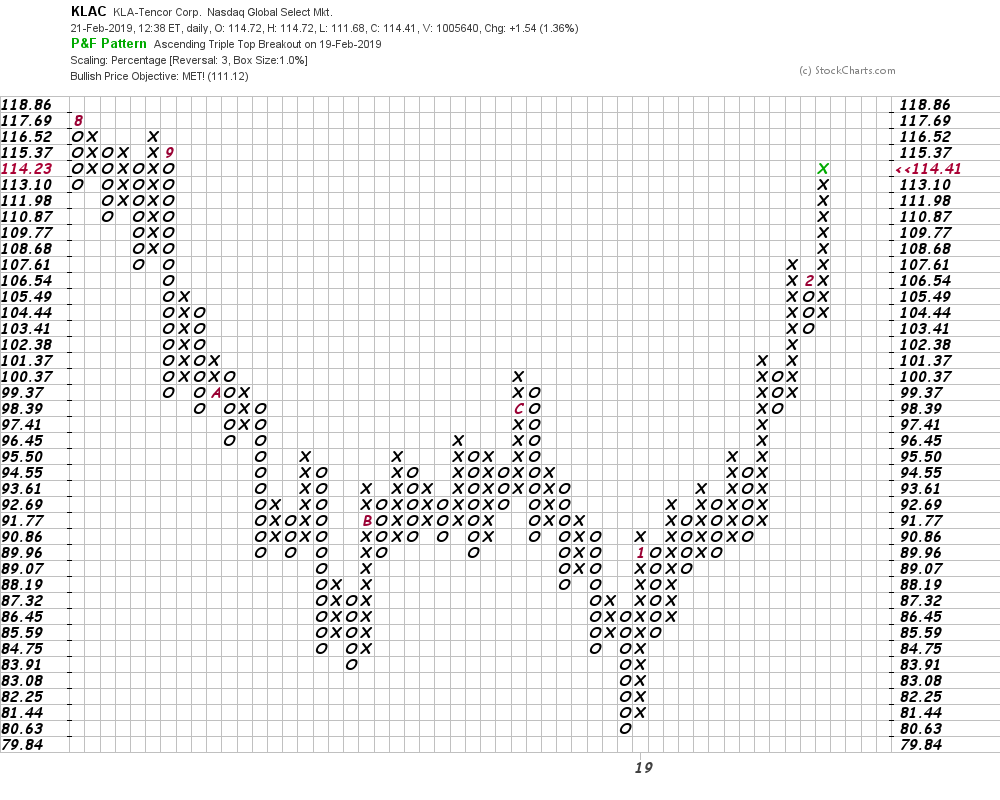 Bottom-line strategy: KLAC is more than halfway through a band of overhead chart resistance from last year. The odds favor that KLAC will go through this resistance zone. Hold longs and raise sell stop protection to a close below $105. Things get more bullish above $121.

Get an email alert each time I write an article for Real Money. Click the "+Follow" next to my byline to this article.
TAGS: Investing | Stocks | Technical Analysis | Semiconductors & Semiconductor Equipment | Technology | Technology Hardware & Equipment