By TIMOTHY COLLINS Sep 05, 2020 | 08:00 AM EDT
Stocks quotes in this article: QQQ, SPY
Don't ever let anyone else dictate to you when you can sell.
Friday morning, some may have told you to sell when the Nasdaq was down 3%, 4%, or even 5%. Not sure if we actually hit the 5% number, but that morning it was ugly.
Would it have been a good choice to sell into that dip? Hindsight says no, but we know hindsight is virtually perfect. If, however, your time frame was longer than an intraday or one day trade, then selling that morning still may prove to be the correct move. The immediate response is usually: How can that be? How can selling at a lower price than what I could have sold for in the afternoon be the "right" move?
The answer is: because nobody's perfect.
You aren't going to time the exact top or exact bottom very often, if at all. If we gap lower Tuesday, selling on Friday morning may not wind up feeling so bad even if it does at the moment.
I know many hate talking about moving averages and that they don't really matter; however, when we see how many indexes basically bounced off of their 50-day moving averages and closed right around their 20-day moving averages, it becomes more than coincidence. The Invesco QQQ Trust ( QQQ)  closed just above its 20-day moving average.
If you look back to the August drop, you'd find it also bounced off the same moving average. The May and June lowers align as well. We dipped under for a single day in July, but basically the lows were right around the moving average. Once is chance. Twice is a coincidence. But I count at least seven -- yes, seven -- instances on the daily chart going back four months. The SPDR S&P 500 fund ( SPY) has rotated between the 20-day and 50-day moving average, while the Russell 2000 has been almost exclusive with the 50-day. Ignore them if you want, and mock them if you must, but you're ignoring important information in the current market by doing so. 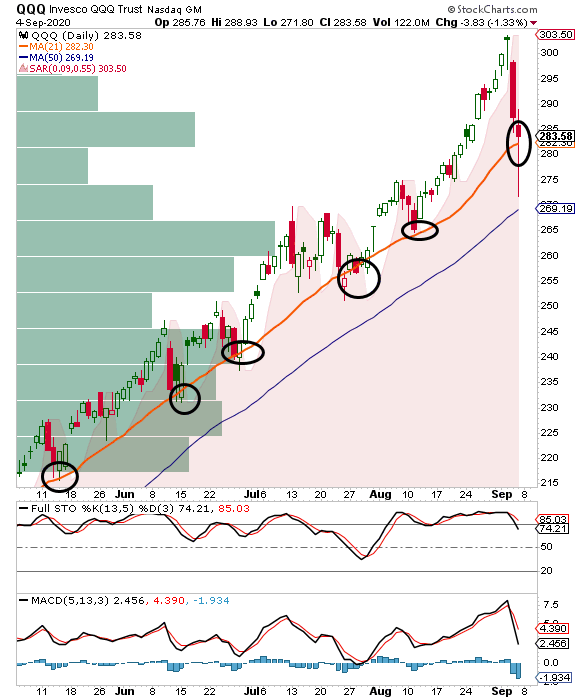 What that also means is if QQQ closes under the 20-day moving average on Tuesday, then selling anything Friday may wind up being a solid move.
The bounce in tech, despite closing red, should give buyers some resolve over the weekend. We have three days to gather our wits, steel our resolve, and watch the action Tuesday. I do feel there are players, (hey, Softbank), that have definitely identified weekly options as a way to game the system, especially to the upside, and I believe we saw a bit of that again this afternoon in a few select tech names.
It's been a crazy week. We all deserve the next three days to recoup. Use them. I don't think we're anywhere near done with the volatility this month.
Have a great weekend, folks.
Get an email alert each time I write an article for Real Money. Click the "+Follow" next to my byline to this article.
TAGS: ETFs | Investing | Options | Stocks | Technical Analysis | Bearish Bet