In the second Executive Decision segment of his "Mad Money" program Monday, Jim Cramer sat down with Bob Gamgort, chairman and CEO of Keurig Dr Pepper Inc. (KDP) , the beverage company with shares that are up 11.6% for the year to date and up more than 20% since the merger of Dr Pepper Snapple with Keurig Green Mountain a little over a year ago.

As for the company's other namesake, Keurig, Gamgort said more than 28 million homes now have a Keurig brewer and that brand also keeps innovating with new products such as the forthcoming "Duo" brewers. Keurig is also working hard to reduce its environmental footprint with recyclable K-Cups that have already debuted in Canada.

Let's look at the charts of KDP.

In this daily bar chart of KDP, below, we can see an uptrend from October to June, but prices are showing some weakness from the late June zenith. Prices broke the June support around $28 but have bounced back a little. The daily On-Balance-Volume (OBV) line has declined from late June to signal that sellers of KDP are now acting more aggressively than buyers. In the lower panel we can see equal peaks in May and June from the momentum indicator. When compared to the higher price highs in May and June this gives us a bearish divergence and may have foreshadowed the weakness in July.

In this Point and Figure chart of KDP, below, we can see the pattern of higher highs and higher lows. A price target of around $33 is projected. A decline to $27.26, however, will probably weaken this chart. 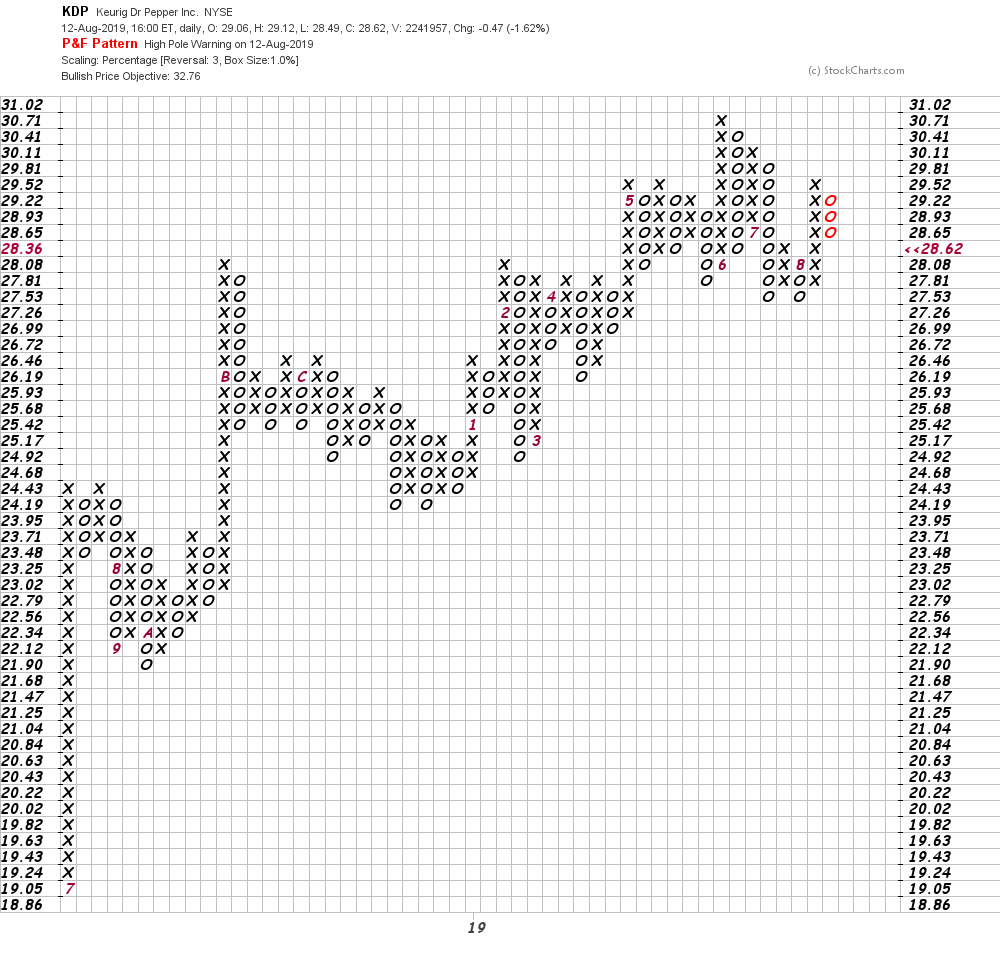 Bottom line strategy: The long side of KDP does not feel right to me, but the bears don't take control until we break the recent lows around $27.50 or so. I would anticipate a sideways trading range with a possible downward bias.

Get an email alert each time I write an article for Real Money. Click the "+Follow" next to my byline to this article.
TAGS: Mergers and Acquisitions | Investing | Stocks | Technical Analysis | Beverages | Consumer | Consumer Staples | Mad Money | Executive Interview | Real Money

Jim Cramer: Why Do I Love Fintechs? Because It's Better to Be With the New

But I never had anything definitive until Monday when Jamie Dimon was interviewed about the financial tech competition.