Johnson & Johnson (JNJ) did not do enough to alleviate investor concerns on Tuesday morning. The company nudged past earnings per share estimates of $1.95 by delivering $1.97 on $20.4 billion in revenue. However, the wrinkle came in the form of "lite" guidance.

Management projects 2019 EPS of $8.50-$8.65 versus the consensus estimate of $8.61 with revenue guidance coming in almost $2 billion shy of estimates. That is a little above a 2% miss on revenue. Given that JNJ just reported its fourth-quarter numbers for 2018, there's a lot of runway left to adjust these numbers moving forward. The EPS net is wide enough that JNJ could still deliver in-line or better-than-anticipated earnings plus I believe management is likely taking a conservative approach, so I'm not concerned about guidance.

Growth numbers, backing out negative currency impact, landed in the very low single digits although currency drag makes the headline growth number appear virtually flat for the quarter. Overall sales increased a little more than 6% after adjusting for a positive currency impact. With the 6% revenue growth rate along with the 13% EPS growth rate, JNJ does a fairly decent job at justifying its 2019 P/E ratio around 15, especially once an investor factors in the 2.75% yield along with ongoing $5 billion share repurchase program. 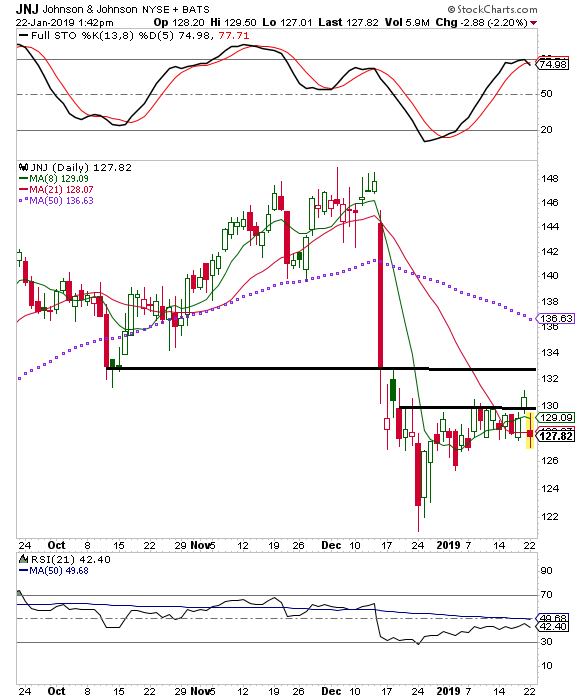 The largest overhang for JNJ is the talc/asbestos claim. I still believe the $40 billion in market cap JNJ has surrendered since mid-December has priced in the majority of a negative finding/liability for the company. I peg the downside at $110 on an initial overreaction with the shares settling in a $115-120 trading range as the company potentially negotiates a settlement. Of course, that's a big if. Unfortunately, until the overhang is removed, we see some clear resistance between $130-$133.

If you aren't already involved in the name, I'd likely remain on the sidelines. For traders on the long side, I would consider using collars or covered calls against your long share position. Collars are becoming more attractive as volatility continues to get sucked away from JNJ shares, especially with earnings now behind the company.

However, until the talc issues are clarified the risk versus reward doesn't appear to justify either a bullish or bearish position in JNJ. For most traders, there are likely better investments to be had than JNJ now, so I'd pencil the name as an avoid for now.

Get an email alert each time I write an article for Real Money. Click the "+Follow" next to my byline to this article.
TAGS: Litigation | Earnings | Investing | Stocks | Trading | Healthcare | U.S. Equity | Stock of the Day