By STEPHEN GUILFOYLE Jul 31, 2019 | 12:07 PM EDT
One thing has started to become clear for General Electric ( GE) half way through 2019: The company is starting to make progress. I think.
We already knew that problems surrounding Boeing's ( BA) production of 737 MAX aircraft would be a risk to GE Aviation. Still, at least on the surface, it's moving in the right direction. Not that the retail investor has to run out and start accumulating shares this morning, but perhaps this semi-forgotten, but still $90 billion company needs to stay on our radar.
For its fiscal second quarter, GE posted earnings per share of 17 cents, a nickel beat. The firm generated revenue of $28.83 billion, in line with industry expectations. That was up sequentially, but off 1.3% year-over-year. One significant factor that can not be ignored, at least from my perspective, is the better corporate discipline that seems to allow for better performance. Maybe I'm biased, but that starts at the top. That's CEO Larry Culp. If anyone is Obi-Wan Kenobi, he is.

Adjusted industrial free cash flow still hit the tape at minus $1 billion -- a serious cash burn. Better than the mid-point of consensus, and more importantly, better than feared.
Important to focus on, the company now projects full-year expenses associated with the planned industrial re-structuring to land in a range spanning from $1.7 billion to $2 billion. That's vs. expectations of $2.4 billion to $2.7 billion, and that's huge. Culp credits improvements at power, lower restructuring and interest, and better earnings for raising the firm's full year outlook.
As far as that outlook is concerned, GE guided 2019 adjusted earnings per share up to 55 cents to 65 cents from 50 cents to 60 cents. The company also moved expectations for full-year, adjusted industrial free cash flow to a range you could drive a truck though of minus $1 billion to plus $1 billion from a former range of minus $2 billion to flat. That's an impressive guide-up.

I might be more easily impressed than others. Investors need to be aware that some of the best among the analyst community that cover this name did not seem to be impressed. J.P. Morgan analyst Steven Tusa, who has been more accurate than anyone else in the universe in interpreting the firm's troubles all the way down, holds the view that GE reported an operational miss for the quarter, driven by a material miss for aviation. Tusa sees the drivers of the up-guidance as being "low quality." He also opines that investors should sell into any strength they see post-earnings, while maintaining an "Underweight" rating.
In addition to Tusa, Cowen's five star analyst Gautam Khanna, a very highly respected member of the community in his own right, maintained a "hold" rating, while setting an $8 target. Ouch. 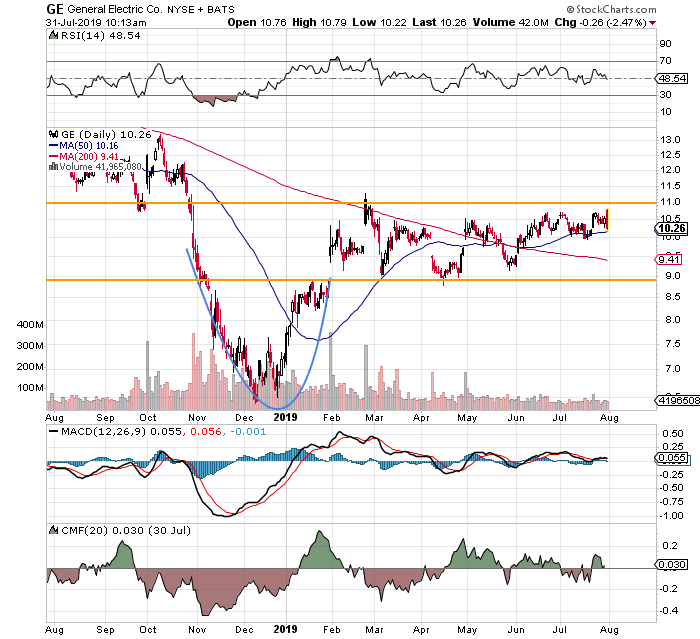 Technically, the early Wednesday failure as the share price approached the $11 level could be significant. A take and hold of that level tells me that the coast is clear to initiate an equity position. A failure to do so, indicates that perhaps this name is just not a 2019 story. Personally, I will continue to play this game through long-dated options exposure at inexpensive premium cost. Let's see what the current quarter looks like in three months.
Get an email alert each time I write an article for Real Money. Click the "+Follow" next to my byline to this article.
TAGS: Investing | Stocks | Airlines | Technology Hardware & Equipment

I'm Not Sold on Kilroy Realty Based on Its Charts

The technical signals for the REIT are mixed at best and don't inspire confidence.