"Anyone buying this book is going to be out a tidy sum if he is sucked in by the title. I wish I could write a real sexy book that would be barred from the mails. Apparently nothing whets a reader's appetite for literature more than the news that the author has been thrown into a federal pokey for disturbing the libido of millions of Americans."
- Groucho Marx

One might view with philosophic admiration the strange paths of the libido and might consider investigating the purposes of its circuitous ways.

In psychoanalysis the libido is the energy of the sexual drive as a component of the life instinct.

Sigmund Freud is the originator of the modern use of the term ("libido"). It is the instinct energy or force, contained in what Freud called the id, the strictly unconscious structure of the psyche. Freud explained that it is analogous to hunger, the will to power, and so on insisting that it is a fundamental instinct that is innate in all humans.

Of course I am using the word "libido" as an acronym in an attempt to artfully deliver an investment point of view.

*L: Liquidity, the present that keeps on giving by the monetary Gods.
*I: (Low) interest rates provided by the world's central bankers.
*B: Buybacks, delivered at a record pace.
*I: (Low) inflation as a function of globalism, demographics, disruptive innovation and productivity.
*D: Diminished listings of New York Stock Exchange companies (from 7,800 in 1999 to 3,800 presently) - producing a favorable demand/supply equation.
*O: Optimism, as a function of all of the above! (Included and expanded upon in my recent column, "What's Going On (In This Forgiving Market)?"

Importantly, Dr. Freud pointed out that libidinal drives can conflict with the conventions of civilized behavior, represented in the psyche by the superego. It is this need to conform to society ("Group Stink?") and control the libido that leads to tension and disturbance in the individual, prompting the use of ego defenses to dissipate the psychic energy of these unmet and mostly unconscious needs into other forms. Excessive use of ego defenses results in neurosis. A primary goal of psychoanalysis is to bring the drives of the id into consciousness, allowing them to be met directly and thus reducing the patient's reliance on ego defenses.

Freud viewed libido as passing through a series of development stages within the individual. Failure to adequately adapt to the demands of these different stages could result in libidinal energy becoming "dammed up" or fixated in these stages, producing certain pathological character traits in adulthood. Thus the psychopathologized individual for Freud was an immature individual, and the goal of psychoanalysis was to bring these fixations to conscious awareness so that the libido energy would be freed up and available for conscious use in some sort of constructive sublimation.

Of course, some suggest that an overactive libido, may be mephitic and can have adverse consequences!

Now that we got that over with (!), I am sticking to what got me here (over the last four decades) -- a contrarian streak and a calculator.

To repeat my view, I just don't agree with market participants' elevated optimism.

Notwithstanding the strong and persistent price momentum I just don't see the basis for further gains -- and I view the upside reward as being dwarfed by the downside risk.

* The Fed Is Pushing on A String: The Fed has now cut three times and there is no meaningful improvement in the domestic economic data. Indeed, fourth-quarter Real GDP growth forecasts have moved to 1% or less from 3% in the first-quarter of 2019, and 1.9% in the third quarter. 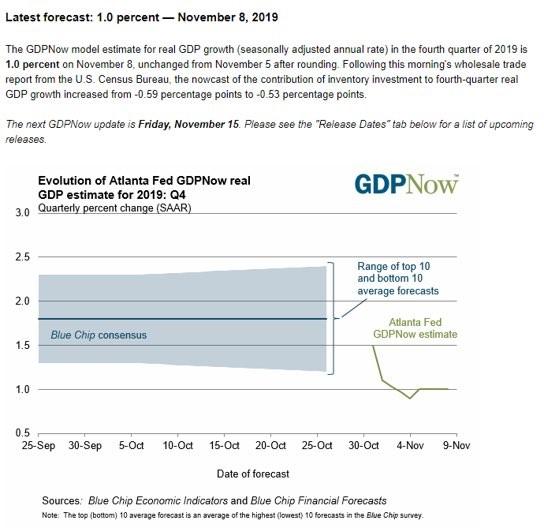 As seen below we are already in an "earnings recession" and the underlying drivers (and rates of change) of deteriorating margins, slowing sales, policy uncertainty and lack of coordination and cooperation of the world's largest economic players (in an ever flatter world) are beginning to raise concerns for 2020-21.

Moreover, as I claimed in Monday's Trade of the Week (since closed):

"The spread between GAAP and non GAAP earnings has never been wider. I am not sure why "talking heads" only use non GAAP these days - but it creates the perception of an artificially low S&P price earnings multiple. According to the Wall Street Journal - "Last year, 97% of S&P companies used non-GAAP metrics, up from 59% in 1996."

As of last week about half of the S&P constituents (on an operating and GAAP basis) exhibited -3% year-over-year decline -- the slowest growth rate since 2016 -- as the S&P makes a new all-time high (and is +24% year to date): 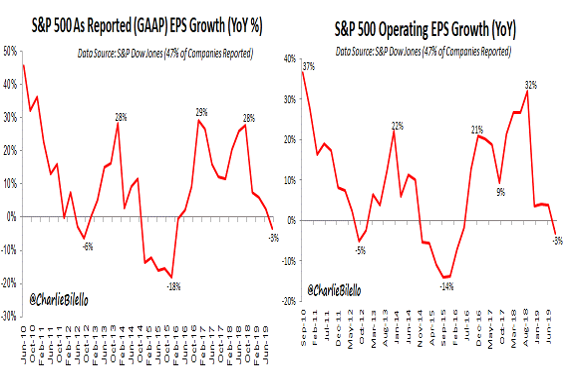 * Nor Are Some Stocks Higher From Easier Money: The Russell Index, supposed to be levered to domestic growth, is only +1% higher since the first rate cut in July. Meanwhile the CRB Index is down by over 3% and the 10-year TIPS breakeven is 20 basis points lower (to 1.55%) since that first cut in the federal funds rate.

Switching gears back, then again, there is this, from Dr. Freud:

"Unexpressed emotions will never die. They are buried alive and will come forth later in uglier ways."

But that, as the Wizard said in The Wizard of Oz, "is a horse of a different color!"

"Ha ha ha
Ho ho ho
And a couple of tralalas
That's how we laugh the day away
In the merry old land of Oz."

(This commentary originally appeared on Real Money Pro on November 13. Click here to learn about this dynamic market information service for active traders and to receive Doug Kass's Daily Diary and columns from Paul Price, Bret Jensen and others.)

Get an email alert each time I write an article for Real Money. Click the "+Follow" next to my byline to this article.
TAGS: Earnings | Federal Reserve | Indexes | Interest Rates | Investing | Markets | Rates and Bonds | Stocks | Trading | U.S. Equity