I call B.S. to the wanton speculation that has consumed our markets.

In my decades of investing experience I have not seen such mindless and uniformed speculation as I have witnessed recently. Indeed, in nominal dollar terms (and let by retail traders, see chart below) it is far in excess of the dot.com boom. 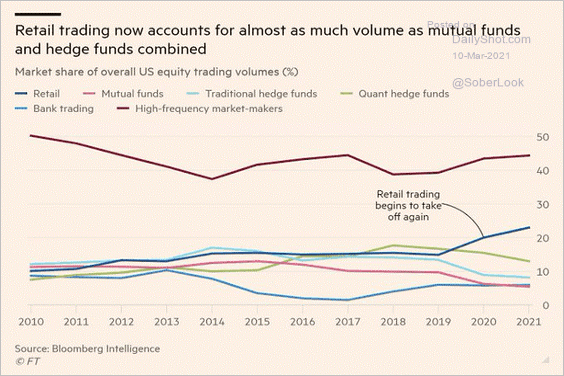 The Bible says (Proverbs 16:18) that "pride goes before destruction, a haughty spirit before a fall."

And William Shakespeare warned that dreams are the children of an idle brain, begot of nothing but vain fantasy.

Adopting a YOLO mentality ("you only live once"), speculation begot initially by analphabetic retail traders with little historical market perspective, and even less micro (individual company) knowledge - using Robinhood and other commission free platforms and reddit as their investment research and communities - is now spreading and is morphing into an institutional experience and phenomenon.

I am here to write that at least I now think I have it all figured out.

Bitcoin? Waste of time, plus the central bankers will make it illegal at some point anyway.

Meme stocks? They no longer go up fast enough.

Commodities? Sure maybe another 10 year upcycle, but that takes too long.

It's all about books, the proof is in the pudding with this Dr. Seuss price rip - even though the CPI says the prices did not go up, but it is still early innings. This is funny!

Why wait for a book to be banned, and then hope you have a copy? Just buy all the inventory of any book, then get it banned yourself. That's the perfect form of market manipulation, I don't think there are any rules about book banning manipulation, and if there were, it's not like the SEC would enforce them anyway. Just start a Reddit chatboard, maybe call it "bannedbookbets."

Once stocked up on inventory, let the social justice warriors rip. Twitter (TWTR) , Facebook (FB) , CNN, MSNBC, The New York Times, The Washington Post, they will all love it and pile on, free help. Talk about a multiplier effect!!! Keynes would be jealous. It will be easy to get anything cancelled.

Then Robinhood will find a way to add book trading to their platform, and Citadel can accumulate the inventory of the target books. Seamless! Who cares if it is inventory they don't even own, or they sell it to your Robinhood account for 20% more than where it could be had elsewhere. Doesn't matter, because Robinhood would be selling you the books commission free and with no shipping charges. Plus academic studies will indicate otherwise and claim selling off banned book order flow to frontrunners actually gets you a better price.

I was thinking of starting with Pride and Prejudice. I know the quick-witted Lizzie (Elizabeth Bennet) is a woman and appeared incredibly virtuous, but I am sure she did something wrong. Maybe in her past life? The Reddit warriors will be able to sleuth it out. Down with Lizzie, one of my favorite literary characters of all time! A strong and intelligent woman, but she is toast now! 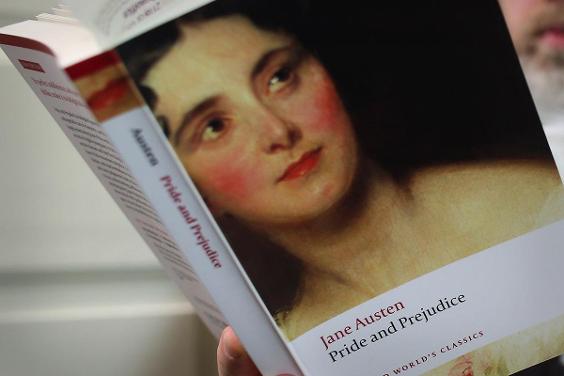 Gore Vidal, boy, probably curtains for him too. He thought he had all his based covered, but I am sure there is a class he forgot about and therefore will now be viewed as exclusionary.

Back in the day a friend of mine needed to use to use Match.com  (MTCH) to get a date because no woman would actually talk to him in a bar because he is short, annoying, and not particularly attractive. Well, he used to throw into his essay that he was a huge fan of Lizzie. It made him seem well read and sensitive. So much for that line, in this day and age my friend would be a misogynist because he liked the book Pride and Prejudice.

Speaking of which Hemmingway, oh boy is he f****ed (sorry guys I just cleaned out Amazon's (AMZN) inventory of his books).

As for my friend claiming he was also 6'2, well that is a separate issue.

Actually, come to think about it, I should shoot for the moon and go after the Bible: 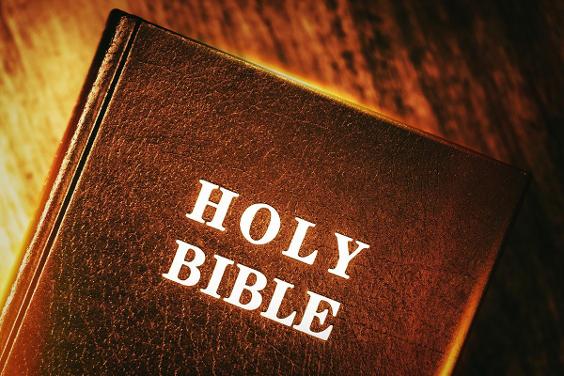 I will be making billions of dollars. But I can see how this plays out, eventually I will become overconfident, and go after Karl Marx's Das Kapital, then it will be all over as federal authorities will be sure to come after me at that point! 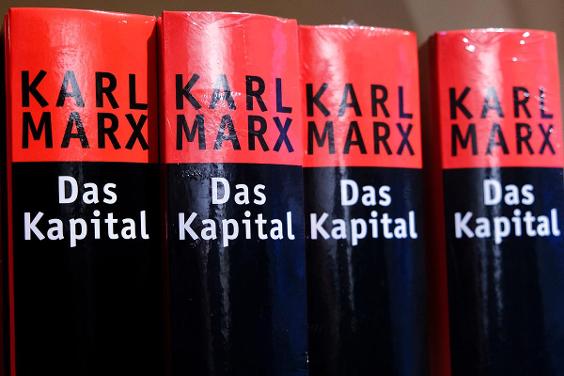 "There are three kinds of lies: Lies, damned lies and statistics."

The CPI was out Thursday and to many the release fits with the consensus view that markets are overestimating the risk of significantly higher inflation over the next 12 months.

The market (and the financial media) proclaimed that David Tepper was right and that interest rates were going to move back lower.

The Pavlovian market participants rejoiced in the belief that, as the ten year yield goes down, the markets will go up.

But, there were several gems in the release that few have recognized. 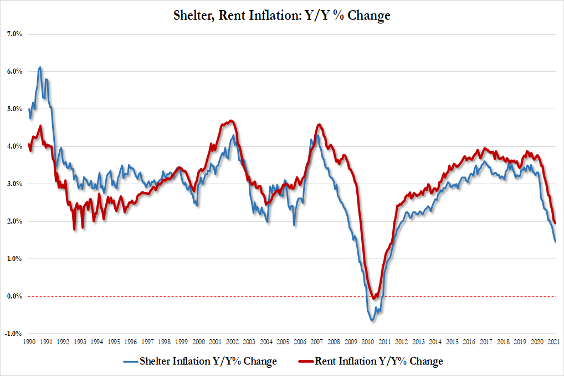 In response to the weak CPI, the narrative from the financial media's commentators and the talking heads that paraded in front of them - was that the recent bear market in growth stocks was over. And that it was time, once again, to buy - perhaps even to buy with reckless abandon. Granted airline prices, one of the biggest components holding the fake CPI down, did drop in real life, but the amount of people flying is way down - I guess in theory PCE should account for this and shift the basket but I doubt it.

Right off the bat the government offered this disclosure regarding the CPI:

"Data collection in February was affected by the temporary closing or

limited operations of certain types of establishments. These factors resulted in an increase in the

number of prices considered temporarily unavailable and imputed. While the CPI program attempted to

collect as much data as possible, many indexes are based on smaller amounts of collected prices

than usual, and a small number of indexes that are normally published were not published this month."

My translation would be:

Valuations Have Been Careening Higher

Under the facade of unprecedented monetary and undisciplined fiscal stimulation almost every traditional valuation metric is approaching or at all-time highs: 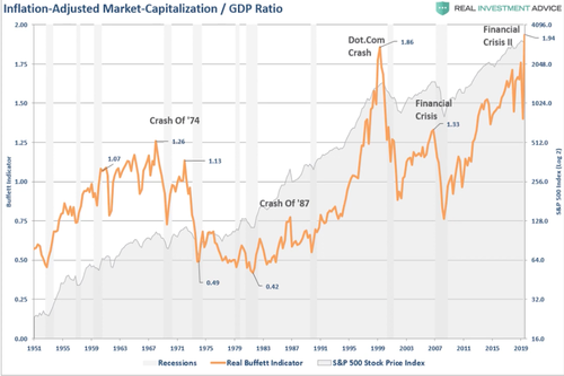 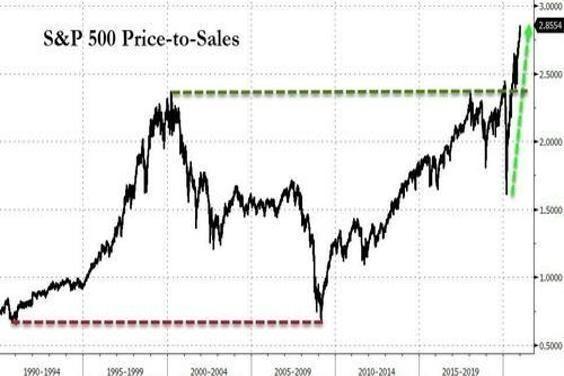 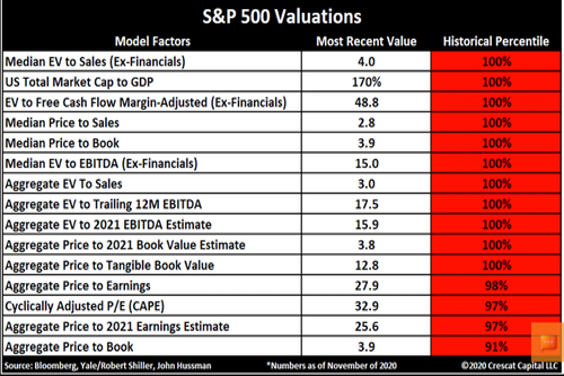 But I would again point out that much of the climb in price earnings ratios (to 22x) is rationalized by low interest rates - a condition that is now changing.

Sure, the risk free rate of return is hospitable to valuations, but with rates likely climbing, the argument grows less compelling.

Today's earnings yield (the inversion of the price earnings multiple of 22x) is about 4.5%. Against that the Ten year US note is yielding 1.50%. The difference is the "equity risk premium" of 3.0% - about the same it has been for the last several decades.

If the risk free Ten year US note yield rises - stocks grow more vulnerable with a lower risk premium. And this is what has been concerning investors of late - especially of a growthy Nasdaq-kind.

"The pride of your heart has deceived you, O dwellers in the clefts of the rocks whose habitation is the heights, who say in your heart, 'Who can bring me down to the ground?'"

With valuations soaring and with stocks making new highs, the current degree of speculation in countless gewgaws is unprecedented and, shockingly - at least to me! - is being unquestioned by the many.

We are in a bull market in "first level thinking" and in complacency.

Pavlov's dogs, the absence of bonafide analysis of data, or any realistic view of the domestic economy's weak foundation of growth, and just, general stupidity, are alive, well and thriving.

Moreover, roundly ignored are the adverse consequences of the largesse of monetary and fiscal policy. The collective eyes of traders and investors are being shut to inconceivable and growing deficits and our burgeoning national debt - both of which will serve as governors to economic growth.

Market structure changes also pose underappreciated risks. As I have previously written, the dominance of passive investing, which worships at the altar of price momentum, coupled with a new generation of speculative buyers (in Robinhood and on reddit) and the popular narration and the silly antics of icons like David Portnoy, have contributed to the least education trading and investor base in history. Astonishingly, and as a sense and time stamp to this era's lunacy, some very well respected commentators endorse and try to gain favor with the senselessness of the YOLO ("you only live once") trading crowd.

To those that believe that the phrase "price is truth" and that price momentum and squeezing heavily shorted stocks (just because) are the sine quo non and path to trading and investing riches - I have a message for you.

This will end badly.

That said, you won't be able to find me on Twitter anymore.

Instead you can find me over on r/bannedbookbets these days - as I plan on cornering more authors' books.

(This commentary originally appeared on Real Money Pro on March 12. Click here to learn about this dynamic market information service for active traders and to receive Doug Kass's Daily Diary and columns from Paul Price, Bret Jensen and others.)

(Facebook and Amazon are holdings in Jim Cramer's Action Alerts PLUS member club. Want to be alerted before Jim Cramer buys or sells these stocks? Learn more now.)

Get an email alert each time I write an article for Real Money. Click the "+Follow" next to my byline to this article.
TAGS: Investing | Markets | Stocks | Technical Analysis | Trading | Book publishing | Consumer Products