"Gretchen, stop trying to make fetch happen. It's not going to happen."

"Investment wisdom is always 20/20 when viewed in a rear view mirror."

The concept of "Group Stink" and "second level thinking" have been a continuing theme in my Diary for years.

The odor of consensus and "first level thinking" permeates our markets. It is almost as if Gustave Le Bon wrote:

"The masses have never thirsted after truth. Whoever can supply them with illusions is easily their master; whoever attempts to destroy their illusions is always their victim."

But first let me explain further the derivation of the title of this missive -- as it relates to this theme:

In the 2004 cult movie Mean Girls, Regina George tells Gretchen "to stop trying to make fetch happen" (hoping to make it the new - it word). The quote has achieved its own popularity as a means of mocking the out-of-touch." While "fetch" started as a joke in the movie, it has caught on off-screen in many memes using the phrasal template, "Stop trying to make X happen? It's not going to happen" - as in, "Stop trying to make Google Plus happen? Its not going to happen." The word's actual meaning is supposed to be 'nice', 'fresh', 'desirable,' or 'cool'. It is most likely a shortened version of the word "fetching," a now less-common term for attractive.

That's my (hopefully) entertaining way of explaining that the investment mosaic is complex. Self confident, trivial and non rigorous explanations to a complicated investment backdrop no longer work for me and shouldn't for all of you. Like the word "fetch", or what happened to Amelia Earhart or to Jimmy Hoffa's body -- the answers are not as simple as many "talking heads" suggest when they are asked on Fin TV about the market's or individual equities' daily price action.

Moreover, observations and interpretation of price action is now deeply complicated by Covid-19 and its economic and market ramifications as well as the powerful impact and dominance of the changing evolution from active investment management to passive products and strategies that worship at the altar of price.

Investors want perfect endings - they want to be in the comfort of crowds. It builds their confidence and reduces their business risk. But some poems don't rhyme and some stories don't have a clear beginning, middle and end. Life is about not knowing and markets are not about "first level thinking" - its about discounting and delicious ambiguity.

Years back Divine Ms M, Real Money's Helene Meisler, delivered one of the most laconic and powerful phrases that embraces non consensus thinking -- it is pinned on her Twitter account (@hmeisler):

"Price has a way of changing sentiment."

I have long written that there are many ways to deliver outsized trading and investing returns, technical and fundamental -- and though my analytical approach, based principally on the calculation of "fair market value" and "margin of safety", has worked for me for almost five decades, it is not the sine quo non for every trader and investor. I have also been outspokenly critical of an approach which relies on one factor (e.g., unusual call activity) which has no empirical evidence of success in any academic study extant.

Divine, who happens to share my love for baseball, and putting it in baseball terms, is my designated hitter -- she is in my daily and designated batting order.

Quite frankly one of the first things I do every morning is to got to Helene's column on Real Money -- as it provides a concise collection of technical observations that even a funnymental analyst like I can understand!

Divine Ms M's Friday morning column, "Breadth Gets in Gear, but Stocks Stall Out" touches on several points I was prepared to write about Friday morning:

* The consensus loved tech in September and now they love industrials: Yet there has been an awful lot of stalling out lately. That's not a bad thing. Stocks need to rest, but I have my eyes on Industrial Select Sector SPDR Fund (XLI) , an exchange-traded fund for the industrials. Why? Because three months ago every guest on TV wanted to be long technology just as it peaked. Now every guest wants to be long industrials. And at least for now there has been precious little progress made in XLI since the initial Pfizer (PFE) report a month ago. XLI tagged $88 that day and is now $88. 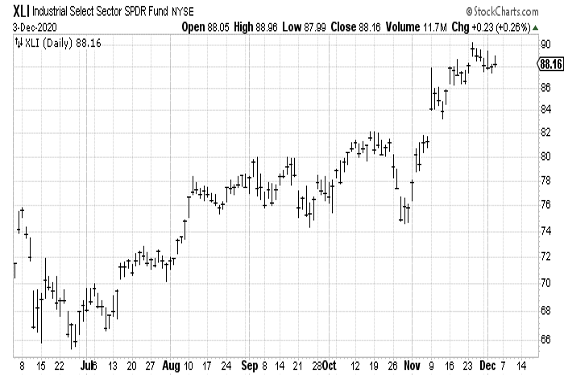 * Three months ago investors also fell in love with housing related stocks: Around early August everyone discovered how many homes were being sold. You can see the iShares US Home Construction fund (ITB) hasn't done a thing since everyone seemingly discovered the trade. In fact, if stocks really did go down, we might call that a head-and-shoulders top, but in this market, stocks threaten to break and don't. But they do stall out, so I am paying close attention to the XLI. 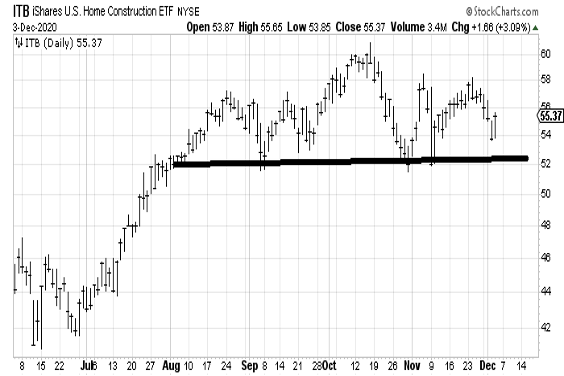 * Investor sentiment is now (bullishly) one-sided: We all know sentiment is quite giddy. There are precious few sentiment indicators that are not at an extreme. Even the American Association of Individual Investors (AAII) saw the bears drop to their lowest level since January. We have seen it go lower, so I wouldn't call this extreme, but sentiment is quite one-sided. If breadth were poor or if breadth falters, it will be problematic for the market. That's why I am watching some of these favored groups. 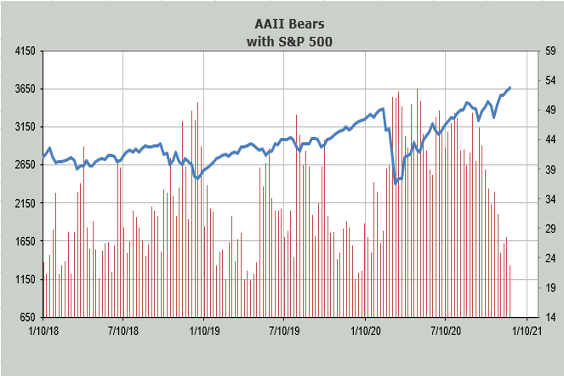 2020 was a year that "Group Stink" formed a convoy (here's a summary of a recent profile) at the lows in March and may now be doing the same at the highs.

(This commentary originally appeared on Real Money Pro on December 4. Click here to learn about this dynamic market information service for active traders and to receive Doug Kass's Daily Diary and columns from Paul Price, Bret Jensen and others.)

Get an email alert each time I write an article for Real Money. Click the "+Follow" next to my byline to this article.
TAGS: Investing | Markets | Stocks | Trading

As we fast approach the unofficial kickoff of earning season, I think it is key to note that expectations are running extremely high.

The completion of an antitrust investigation into China's dominant online marketplace removes a significant overhang from the stock.

Invest in SpartanNash, so You Don't Have to Live Like a Spartan

Let's revisit SPTN, which we looked at here earlier this year.

Rotation Is the Key Issue as Earnings Season Starts

The reaction to earnings from the big banks this week should give us some insight into market sentiment.

Jim Cramer: When the Next Rate Hike Comes It's a Time to Buy Not Sell Stocks

If you want to sell in the next hike all I can say is you are listening to the bears who have been shown to demonstrate historical ignorance.