Last of the Breed

It's who we are. Everyone still standing at this point is pretty darned sharp. Competitive by nature? Everyone in this racket always was. Love. Hate. Ego. More than a decade after algorithms took power away from human beings, traders understand the need to be not fast, but quick. Decisive. In recognizing victory and defeat. Taking action to maximize or minimize the outcome of either. Recognizing when to hedge a position, and when to "just get this nasty thing off my screen." When to work net basis harder than entry or exit. Effort. The effort required to persevere. Edge. Everyone still showing up for this fight has the edge. Full circle back to Love. Hate. Ego. No quit. Not us. Not ever.

Up in the morning with the rising sun? Maybe for losers. By the time we see the sun, we'll be thinking about lunch. We are allies until we are not. Looking for a break? If we can. Don't understand? Get between us and the ability to defend those that rely upon us. You'll learn something new in that moment. I promise. Now, fill those canteens and sharpen those blades. The challenge is upon us.

Just a few days ago, we spoke about the underperformance of the small-caps and the transports -- the two canaries in the coal mine, if you will, versus the broader indices. Suddenly the gap seems to be closing -- and quite rapidly. Weaker dollar? That should improve conditions for multinational large-caps. Access to cheaper credit? The indicated trajectory for monetary policy leans that way. Domestic growth, which would certainly impact both small-caps and transports significantly, is maybe just better than many had thought? Perhaps.

On Thursday, both the Russell 2000 and the S&P 600 ran 1.9% to the upside, while the Dow Transports rallied to the tune of 1.3%. The only caveat? Trading volume trailed off badly on Thursday. That could be expected, as volumes will explode on Friday. Not just monthly and quarterly rotations, but also the Russell rebalancing is upon us.

The June reconstitution of the Russell indices that so many funds track (Roughly $9 trillion in investment tracks Russell's U.S. indices, alone) is the one day of the year that is like manna from Heaven for those reliant upon commissions in order to drive sustenance. According to Nasdaq, nearly 1.2 billion shares changed hands in last year's closing trade on this day. Across the U.S. exchanges, an estimated $100 billion worth of equity value traded in the seconds leading up to the final sale that day.

Traders have also likely noticed that as the month of June, which has been a good one (both the S&P 500 and the Nasdaq Composite are up more than 5% month to date), that risk, or rather expected growth has reinforced its place at the top of the leader-board over more defensive sectors.

A quick glance at the S&P Select Sector SPDR ETFs will show that Materials (XLB) , and Information Technology (XLK) have easily outperformed the S&P 500 at +7.8%, and +6.5%, respectively. The sectors looked at as bond proxies, such as Utilities (XLU)  and Real Estate (XLRE) , are both in the red for the month while Staples (XLP) are barely up 1%.

Smart people had recently opined on the markets quite differently than how the month turned out, based on the pressured yield curve. But equities didn't quite go for it.

No matter what happens through this rebalance or elsewhere across the financial universe, all will be overshadowed by any headlines that leak out of Osaka. Even if President Trump does not meet with President Xi until tomorrow (Saturday). Don't forget that President Trump has a scheduled meeting with German Chancellor Angela Merkel on Friday (today), and is already tweeting about potential deals with both India and Japan. Needless to say, Osaka is where the game will be played out today -- and for traders, on Monday after markets react to the news flow.

All 18 large banks reviewed by the Federal Reserve passed round two of the central bank's two-step "stress tests" -- an annual event introduced under Dodd-Frank in the wake of the great financial crisis of a decade ago as a means of preparation for a worst-case economic disaster. The simulated worst case this year included an unemployment rate of 10% and a 50% decline in the broader U.S. equity indices. The first test identifies just how much in funds would be lost across the industry (this year $410 billion), the second test is how these banks would make out after returning capital to shareholders. The Fed then approves (or does not) each banks' plan for dividends and share repurchase authorizations.

Immediately after these results, you likely noticed that JP Morgan (JPM) announced an increase in the firm's quarterly dividend from $0.80 to $0.90 beginning in the third quarter, while authorizing a $29.4 billion buyback program. Goldman Sachs (GS) also announced an increase to the quarterly dividend and $7 billion worth of intended repurchases. Both stocks rallied overnight. Citigroup (C) , and Bank of America (BAC) have also now announced increases to shareholder returns, as State Street (STT) , US Bancorp (USB) Capital One (COF) and Wells Fargo (WFC) have all made plans for upward adjustments. This, my friends, will be a good day for the financial sector.

Shares of Apple (AAPL) reacted poorly overnight to the announced departure of Chief Design Officer Jony Ive to start an independent firm with Apple as a client. Ive has been the brain behind the look, the feel, the entire aesthetic across the Apple hardware ecosystem for two decades.

I mean no disrespect, but as an Apple shareholder, I find this not distressing in the least. Not only is the firm trying to focus on the development of the recurring revenue, services side of the business going forward as a way to drive valuation, but also has anyone noticed a whole lot of innovation in Apple hardware anytime lately? Me neither.

The firm states that design team leaders Evan Hankey and Alan Dye will report to COO Jeff Williams who in turn reports to CEO Tim Cook. Has anyone selling the shares today thought that maybe the time for a change in design leadership was indeed at hand? You sell this name hard enough, and I'll probably add. 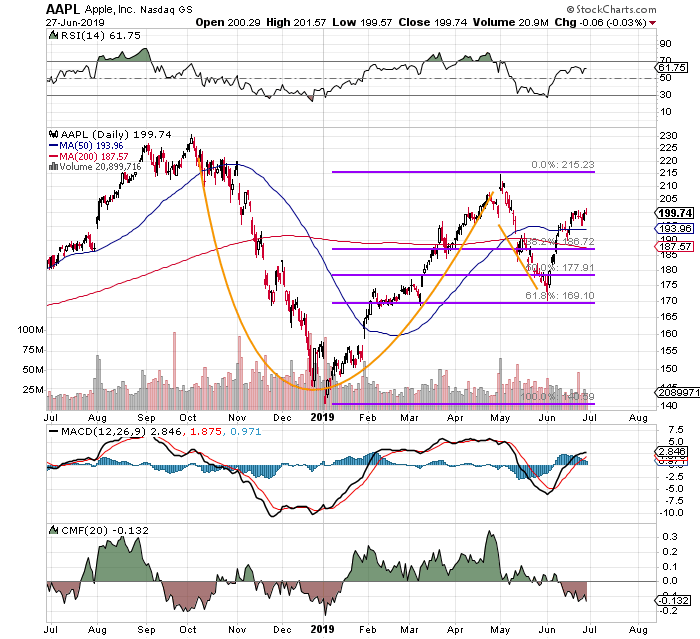 The real danger is that this news might stall Apple's recent rally from a technical perspective. The shares need to take the $215 level to catapult higher. My target is still $240. There is not a failure here but Money Flow has turned against, Relative Strength has stalled, while the daily Moving Average Convergence Divergence looks like it may curl the wrong way.

I would love to add to my core position at $186. That's likely unrealistic. Investors give me a shot at the 50-day simple moving average at $194 in response to this departure in coming days... and I'll say take 'em.

Robinson Cano is a lifetime .302 hitter with 315 home runs. Cano has landed in the end of year MVP voting in eight different seasons. What the NY Mets have in 2019 though, is a highly paid, light-hitting second baseman with warning track power, who is also posting the lowest fielding percentage of his career. See where I'm going with that?

Get an email alert each time I write an article for Real Money. Click the "+Follow" next to my byline to this article.
TAGS: ETFs | Indexes | Investing | Markets | Small Cap | Stocks | Trading | World | Technology | Technology Hardware & Equipment | Telecommunications | U.S. Equity