All in all, it was another truly fine quarter posted by JP Morgan Chase (JPM) . Of course, there are various moving parts -- and not all of these moving parts are necessarily moving in the right direction at the same time. That said, the headline will be the release of $5.2 billion worth of loan-loss reserves that were booked as profit. We had spoken about such activity in my daily Market Recon column at Real Money in the days leading up to this report. And to be honest, the aggressive number blew away expectations. Clearly, the nation's (planet's) elite money center bank is far less concerned with the quality of credit already extended than it had been in 2020, or than even the optimists among us had expected for the present.

For the first quarter, JP Morgan Chase posted GAAP EPS of $4.50, practically obliterating expectations down around three bucks. Even adjusting for one time impacts, including the release of that $5.2 billion -- which is a positive -- as well as other items totaling -$1.1 billion, the adjusted EPS would still land at $3.31. And let's not forget, the $5.2 billion had been put away, scraping the performance of past quarters: It is indeed legitimate profit.

Net revenue for the period landed at $33.1 billion. This number not only exceeded expectations by a "mere" $2 billion, it was also good enough for year-over-year growth of 14%.

Breaking It Down by Division

Commercial Banking made a contribution of $2.4 billion in revenue, -3% q/q, and +11% y/y. Average loans decreased 2%, while average deposits increased 54%.

"With all of the stimulus spending, potential infrastructure spending, continued Quantitative Easing, strong consumer and business balance sheets and euphoria around the potential end of the pandemic, we believe that the economy has the potential to have extremely robust, multi-year growth." 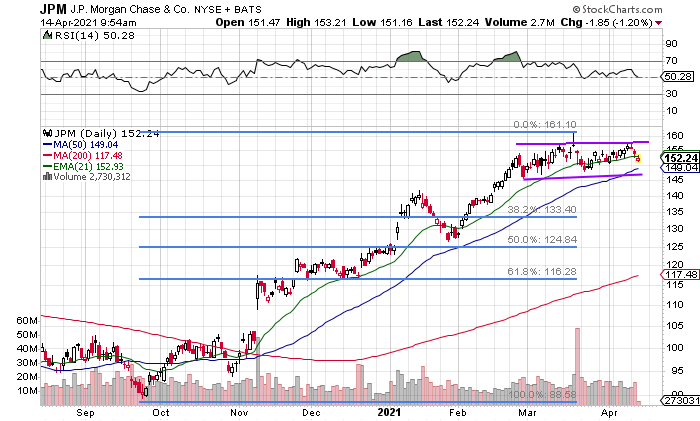 Readers will see the consolidating base that has developed for JPM since late February after an exceptionally strong run that really began 13 months ago. The shares have surrendered the 21-day exponential moving average this morning, which could turn the swing trading crowd against the stock.

That said, the 50-day SMA at $149 is far more important. We need to see portfolio managers' appetite for the name, should that area be approached. The stock is certainly not overbought.

What to do now? Buy it up here? I don't think so. Sell it up here? Could be prudent. Certainly nothing wrong with that. I am long this name, and I have very nice profits to protect, up 54%.

So basically, I start paring this position either at $170 or $148. In the meantime, May 21st $170 calls are going for roughly $0.60. It is probably good to get in the habit of selling covered calls at target price for all positions of 100 shares or more on a rolling one-month (or one-week, if the stock pays) basis. Getting paid for your time. What could be more pleasant?

Get an email alert each time I write an article for Real Money. Click the "+Follow" next to my byline to this article.
TAGS: Fundamental Analysis | Investing | Stocks | Technical Analysis | Banking | U.S. Equity

The Dow Frowns, but I'm Smiling

The Dow is finally starting to close the gap with all the stocks that have been suffering for months, and that is a relief.