The very first. First what? First day of earnings season. First major U.S. drugmaker out of the box since the coronavirus changed not just healthcare, but everything.

Johnson & Johnson (JNJ) went to the tape with first-quarter results here on Tuesday morning. JNJ performed very well, as adjusted earnings per share (EPS) landed at $2.30, a solid beat. Revenue amounted to $20.69 billion, up 3.3% over the comparable period last year and also easily beating expectations for JNJ, which is a holding of Jim Cramer's Action Alerts PLUS charitable trust.

Johnson & Johnson also increased the quarterly dividend from $0.95 to $1.01, for a forward-looking yield of almost 2.9%. The first payment to shareholders at the new rate is expected June 9 to shareholders of record May 26, ex-dividend May 22. Just an aside, this would be the 58th consecutive year that JNJ has been able to increase the quarterly payout.

All three of the company's business segments beat what Wall Street had been looking for. Pharmaceuticals saw an 8.7% boost to sales up to $11.13 billion. Medical Devices were off 8.2%, down to $5.93 billion, and Consumer Health popped 9.2%, to $3.63 billion. The improved performance for this last unit was driven by a surge in consumer demand ahead of expected lockdown conditions.

The problem is in the outlook, and that should not surprise anyone. Doctors have postponed routine healthcare visits. Hospitals have postponed elective procedures. In addition, there should be less demand on the retail side as the folks who drove first-quarter sales higher have stocked up and others are not going out unless they must.

Given these already-mentioned conditions, Johnson & Johnson had to rein in expectations for the full year. JNJ now looks for full-year adjusted EPS to end up in the range of $7.50 to $7.90, down huge from prior guidance of $8.95 to $9.10, but not so far below industry consensus of $8.08. It's a similar story for revenue. Estimated reported sales for the year are now expected to land in the range of $77.5 billion to $80.5 billion, down from prior guidance of $85.4 billion to $86.2 billion. Industry view on this was already down to a consensus of $79.63 billion.

Perhaps the upward movement for the share price here on Tuesday morning has more to do with the dividend and because JNJ felt itself able to guide forward in some way than it has to do with the reductions made to that guidance.

The wildcard for these shares probably will not end up being the ability to pay a nice dividend as many companies may not, nor will it be the fundamental performance from a financial perspective. We all know that Johnson & Johnson is one of the names currently working on a vaccine for Covid-19, and probably the biggest company that has entered into that arena. Testing is expected to start on its candidate by September.

This is what I think investors and, by extension, algorithms will cling to -- namely, any headlines regarding the success or lack thereof concerning this candidate. Heck, that's why I'm long the stock, even though there are plenty of other reasons, not to mention other, already successful drugs. 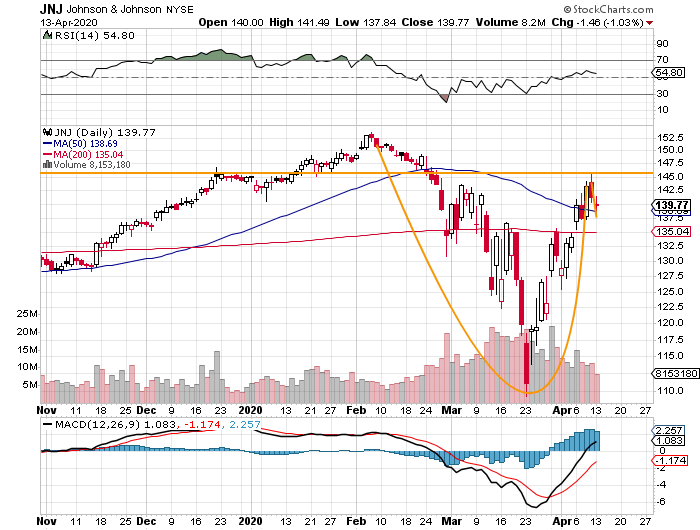 What do we have here? We do have a Covid-19 created cup (for nearly every stock). We may have a handle that ran from Thursday into Monday (two trading days). It's probably not deep enough or long enough to count in my book. If the stock treats this as a cup with handle, and this morning it does look like it, the pivot would be $145, which would make my target price $174. I just don't trust it to run that far. I will gladly settle for an apex that approached the highs ($154) of early February.