By BRUCE KAMICH Aug 27, 2019 | 08:25 AM EDT
Stocks quotes in this article: JNJ
Johnson & Johnson ( JNJ) is the Real Money Stock of the Day on the heels of the Oklahoma opioid ruling. Its is also an Action Alerts PLUS holding.
A judge in Oklahoma on Monday ruled that JNJ had intentionally played down the dangers and oversold the benefits of opioids, and ordered it to pay the state $572 million in the first trial of a drug manufacturer over the prescription painkillers. The company said it would appeal what it called a "flawed" decision.


The amount fell short of the $17 billion judgment that Oklahoma had sought from the JNJ.

What should investors do now with the judgement coming in less than expected but with more opioid cases as well as talc litigation out there? My humble suggestion is to look at the longer-term picture on the charts.
In the daily bar chart of JNJ, below, we can see that the price of the stock is pretty close to where it started the calendar year, leaving investors with a return shy of 3%. Prices did rally from the late December low to a high at the end of June but those gains were given back the past two months. JNJ is trading below the declining 50-day moving average line and the declining 200-day line. The 50-day average is below the 200-day indicator for a dead or death cross.
The On-Balance-Volume (OBV) line followed the price action up and down. The Moving Average Convergence Divergence (MACD) oscillator is below the zero line in a bearish configuration.

In the weekly bar chart of JNJ, below, we see a different and more bearish picture. Since late 2017 we have seen three big attempts for the stock price to move higher -- a possible triple-top formation. Two rallies that stopped short of the $150 level and a more recent rally in May that stopped at $145. In a classic top pattern you want to see volume diminish through the pattern but I don't see that. However, that pattern is revealed in the OBV line.
The MACD oscillator also shows a weakening pattern with lower peaks, which is a sign that the trend strength is diminishing. Right now it does not matter whether the neckline is upward sloping or horizontal.

In this first Point and Figure chart of JNJ using percentage changes, below, we can see an upside price target of $143. This sounds like a positive spin but the target is not a new high for the move up. A trade at $146.49 would be positive and a decline to $126.18 would be bearish. 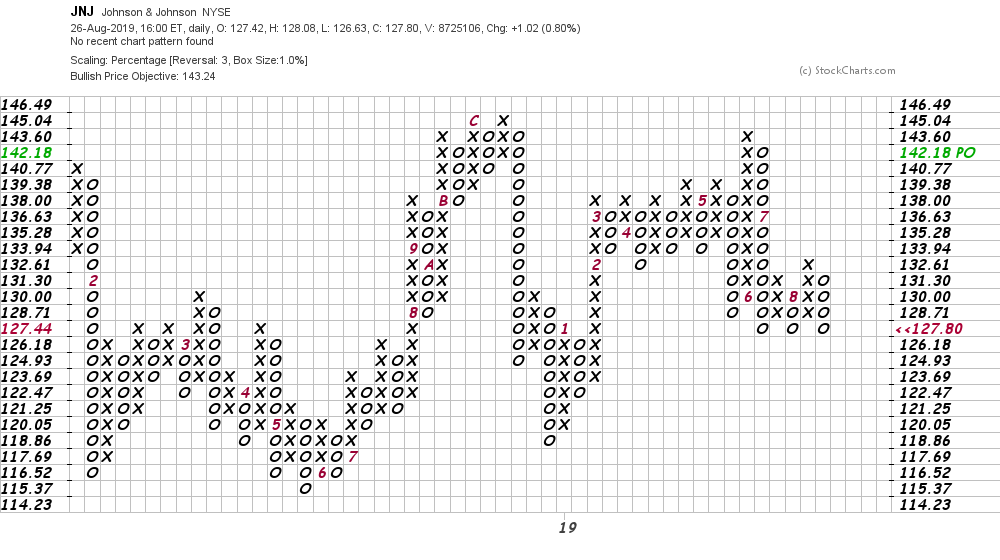 In this second Point and Figure chart, below, we used the average true range to plot the X's and O's and here a downside price target of $110 is shown. It all depends how you torture the data. 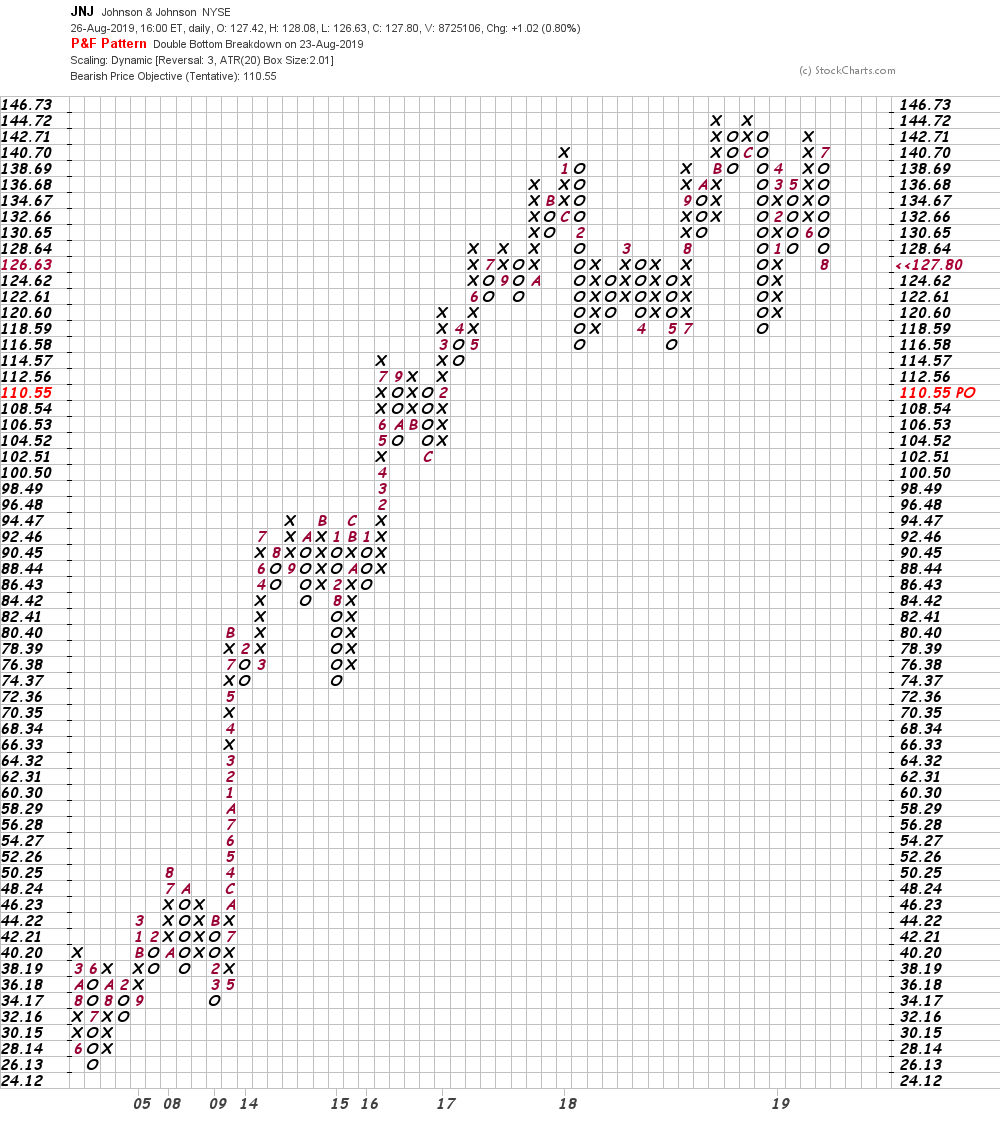 Bottom-line strategy: Bullish traders may be saying or thinking that this is not the first rodeo for JNJ in the courts. They are a big and diversified company with insurance and skilled lawyers. That is true but the mood of the markets can change and that gets reflected in the charts. I am not focused on today's price movement of the stock but the pattern from the end of 2017.
I think there are other solid companies out there that pay a 3% dividend yield with stronger looking charts.

Get an email alert each time I write an article for Real Money. Click the "+Follow" next to my byline to this article.
TAGS: Litigation | Investing | Stocks | Technical Analysis | Health Care Equipment & Services | Healthcare | Pharmaceuticals | Stock of the Day