I had a track and field coach when I was but a young lad. His name was/is Mike Shine. He did not coach at my high school, he was coaching the cadets at West Point at the time.

Mike coached at a camp I attended during summers for promising high school athletes. His claim to fame was having won the silver medal in the 400M hurdles at the Montreal Olympics back in 1976, so we all thought he was the coolest.

He was indeed pretty cool. Mike didn't coach my events. I was a long-distance runner and a high jumper, but he would gather everyone before and after practice and start out real low. Everyone had to join in. "Whoa BABY!!" Hey, it was the late 1970's. This guy had actually medaled in the Olympics. It was fun.

The beats are nice but not what really got this investor fired up. What got me going this morning were two items that may be somewhat related. Number one, Johnson & Johnson guided full-year 2021 revenue toward a range spanning $90.5 billion to $91.7 billion. Wall Street had been around $88.6 billion on this number. Even better, JNJ guided full-year adjusted EPS to $9.40 to $9.60. Consensus here was for an even $9.00. Now, that's impressive.

Second, Chairman and CEO Alex Gorsky said JNJ would soon be releasing data from the Phase 3 clinical study of its Covid-19 vaccine candidate. There has been speculation that the results could come this week. CFO Joseph Wolk seemed to think early next week. Regardless, an entire nation waits with bated breath as this could be the game changer.

The thing is that if JNJ's vaccine can gain "Emergency Use Authorization" from the FDA in short order, this would not only bring a third vaccine online in this country, it would bring a "one and done" vaccine online from a large company capable of producing 1 billion doses this year.

That means that unlike with the Pfizer (PFE) , and Moderna (MRNA) vaccines, which require a double dose three weeks apart, if your state receives 300,000 doses of the JNJ vaccine a week, your state can inoculate 300,000 people without any reservation about holding back half of the doses on hand.

As an added bonus, it is not believed that the JNJ vaccine requires anything like deep-freeze refrigeration to store or ship. This will be key, especially now that Merck (MRK) has dropped out of the race due to the inefficacy of its candidates in early-stage studies.

The entire company was not "cooking with gas" this past quarter.

The rest of JNJ showed some stagnation due to the negative impacts of the pandemic on societal behavior. The Medical Device unit put together sales of $6.58 billion (-0.7%) as patients have been forced to delay anything optional or elective in order to put less strain on the medical system. The Consumer unit (as I stare at my bottle of Listerine) did generate some growth (+1.4%) on sales of $3.6 billion. 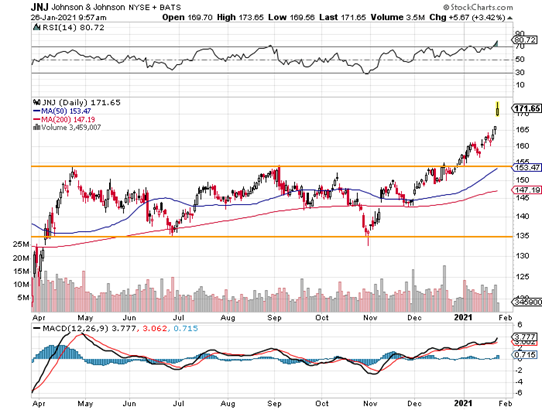 Readers will note that the shares of JNJ have been mired in a flat base (also referred to by normal people as a trading range) basically since April. Only now in 2021 are these shares finally breaking out. Some of you may recall the $185 price target that I gave you many months back. That was based on a failed cup-with-handle pattern, but as you'll see, will not be all that far off.

Using the upper boundary of the trading range as our pivot ($155), and slapping a 20% premium on pivot, which is where I usually place my primary target, we find that the target is now $186. Ooh. Ahh.

You see none of us are that brilliant. Really. Most traders/investors (who know what they are doing) place price targets at either 20% or 25% premiums to pivot points and panic points at either 7% or 8% discounts to these same pivot points. Anyone can do that. The skill is in pattern recognition, and in pivot placement. After that it becomes more complicated as targets and panics have moved once the primary target has been breached and taken, but if you are new, or semi-new, you can take your time developing these skills.

Oh, and God willing, we'll be here with you while you learn. Hopefully we all can learn from each other, because it never really stops.

Get an email alert each time I write an article for Real Money. Click the "+Follow" next to my byline to this article.
TAGS: Drug Approvals | Earnings | Investing | Markets | Stocks | Trading | Coronavirus