One of the most popular segments of "Mad Money" is the Lightning Round, where Jim Cramer offers his thoughts on stocks callers ask about during the segment. On Tuesday one caller asked about Johnson & Johnson (JNJ) : "You buy J&J. They're among the best in America," was Cramer's response. Let's take a look at the charts of Johnson & Johnson, which is a holding of Cramer's Action Alerts PLUS charitable trust.

In this daily Japanese candlestick chart of JNJ, below, we can see how prices plunged from early February. A number of long red candles can be seen below, telling us that the high was near the opening and the close was near the low of the day. Monday's pattern shows a lower shadow, telling us that traders rejected the lows of the day. Tuesday was a big up day with the pattern looking like a bullish hammer. A higher close here on Wednesday would improve the odds that a low has been made. The indicators have yet to get in gear on the upside. The slopes of both moving averages are negative.

The daily On-Balance-Volume (OBV) line is still weak and needs to turn upward again, telling us that buyers are more aggressive again. The 12-day price momentum study still shows lower lows in momentum, which tells us that the decline has not slowed yet.

In this weekly Japanese candlestick chart of JNJ, below, we can see a large and potential bullish hammer pattern. The week is not over so the pattern could morph into something else, but for now it is a very good start. Of course, we want to see a bullish candle next week to confirm the reversal. The 40-week moving average line now has a negative slope and the weekly volume surged as some investors sold aggressively and others were scale-down buyers. The weekly OBV line is still pointed down but the latest bar on the 12-week momentum study shows that momentum is starting to slow. That is a positive.

In this daily Point and Figure chart of JNJ, below, we can see that the software is still projecting a potential downside price target in the $82 area. 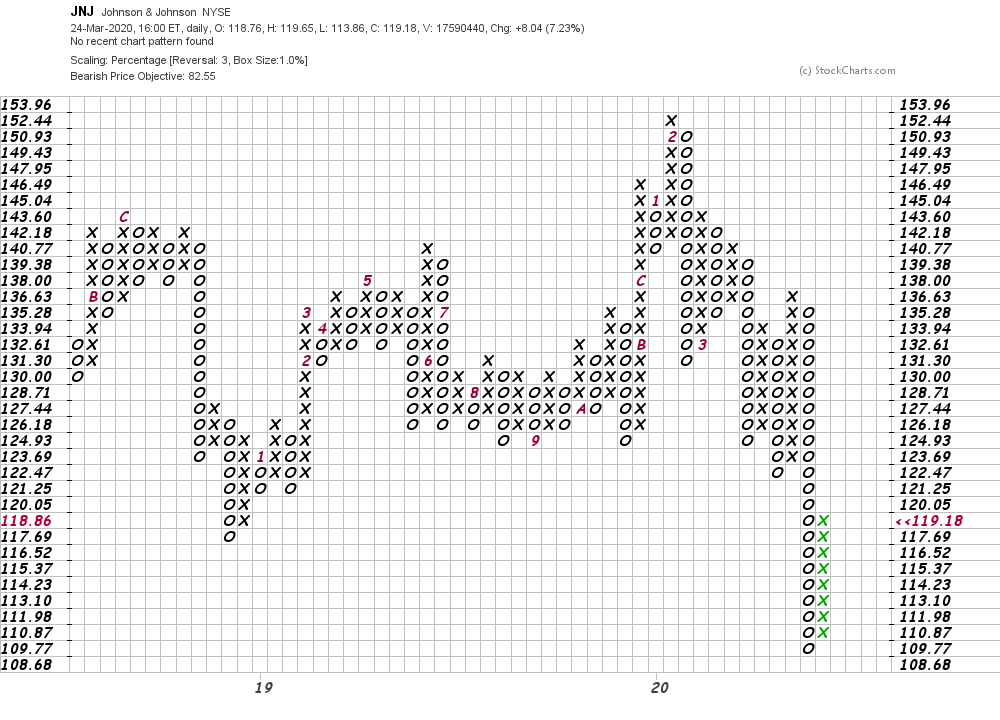 In this weekly Point and Figure chart of JNJ, below, we can see that prices have pretty much reached the $110-$109 price target. Prices could go lower, but a period of consolidation could be expected. 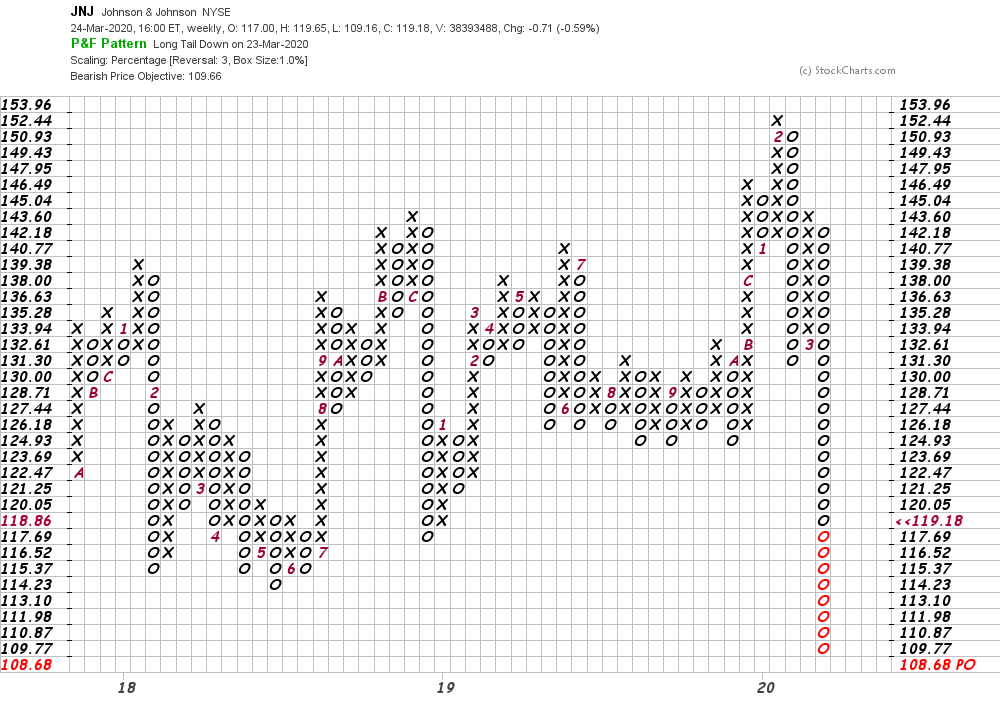 Bottom line strategy: I think JNJ needs to retest the recent low and build a new base pattern. Of course, JNJ doesn't need to listen to me and we could see a rally and a base made from a higher level. Whatever happens we want to look for a place to go long where we can afford to risk a new low close.

Get an email alert each time I write an article for Real Money. Click the "+Follow" next to my byline to this article.
TAGS: Investing | Stocks | Technical Analysis | Biotechnology | Consumer | Health Care Equipment & Services | Healthcare | Pharmaceuticals | Mad Money | Real Money

Here's how to play CGC.