By STEPHEN GUILFOYLE Nov 04, 2022 | 08:00 AM EDT
Stocks quotes in this article: CAH, DUK, HSY, LMT, NOC, BAESF, BA, AAPL, AMZN, QCOM, INTC, LYFT, STX, UPST
Beyond this place of wrath and tears
Looms but the Horror of the shade,
And yet the menace of the years
Finds, and shall find me unafraid.
It matters not how strait the gate,
How charged with punishments the scroll,
I am the master of my fate:
I am the captain of my soul.

You made it this far. I think. Friday. October Jobs Day, also known as the second most important day, from a markets perspective, this week. The next most important day will be next Thursday, when the Bureau of Labor Statistics drops its October print for the Consumer Price Index.

The Cleveland Fed's Nowcasting model shows October CPI at 8.09% for the month of October, with core CPI at 6.58%. Numbers like that would not offer much relief from the September CPI prints of 8.2% and 6.6%, respectively. Better to focus on what's on our plate this day, which still involves the BLS, and leave next week to next week.

Estimates for October Non-Farm Payrolls have been creeping lower over the past few days. My projection was/ is for seasonally adjusted job creation of 203,000, but I did my math last weekend and I was at the lower bound of realistic projections at the time. I have since seen a couple estimates made for something in the 190,000s as this week progressed. One thing is certain, though. Professional economists, while not expecting anything resembling a rapid deterioration of US labor markets, are expecting to see the weakest monthly BLS Employment Survey results since 2020.

There have been hints of softening conditions everywhere, while headline prints have remained stubbornly strong. It seems and feels rather disgusting to almost root against labor market strength, but understand that if conditions do not erode in an organized manner, then the Federal Open Market Committee (FOMC) will force policy overshoot, which they may have already done. This will be much worse for labor markets and could put US labor in a position that will be difficult to recover from for some period of time.

On Tuesday, much was made of the large upside beat in job openings in September's JOLTS (Job Openings and Labor Turnover Survey) report, while a decrease in September JOLTS quits, which is a sign of sagging labor confidence, received little coverage. On Thursday, the weekly Initial Jobless Claims print of 217,000, which is in line with recent prints for that series and a historically low number, was seen as a sign of labor market strength, while the weekly print for Continuing Claims hit the tape at 1.485 million. This continuing claims number has been in a rapid ascent in recent weeks and now stands at a seven-month high. Nobody noticed.

What that suggests to me is that the numbers of those in need of sustained state unemployment help is swelling even as there seems to be 1.9 job openings per unemployed participant, so it must be a matter of finding lateral employment. The opportunity to regain employment "must" only be available to labor supply at a discount to the individual in terms of compensation. All the preceding is happening at a time of elevated consumer inflation, provoking hesitancy. Hence, said participants who have recently or semi-recently lost their employment status choose to continue looking rather than hit the nearest bid just to stay employed. Either that, or these job openings, while still out there, have lost from the demand side of this market a sense of urgency. Perhaps filling these positions has become a lesser priority as business owners/managers match perceived needs for headcount with newly adjusted planned outlays for payroll.

Readers may have noticed that on Tuesday that the October ISM Manufacturing Survey landed with a 50.0 print for its "Employment" component. By the way, 50 is the boundary between growth and contraction in these surveys and comes after the September ISM Manufacturing Survey "Employment" component hit the tape at 48.7. This simply means that October's employment conditions held at September levels. It is not a return to growth.

Then on Thursday, in the October ISM Non-Manufacturing (Services) Survey, the "Employment" component edged from a still-growing 53.0 in September down to a contractionary 49.1. Remember, almost four of every five US workers are employed in some way in providing services. This means that while the smaller group of workers may have stabilized after having already contracted, that the much larger group has only now just started to see their employment status weaken.

Also on Thursday, Challenger, Gray and Christmas, in its monthly announcement for job cuts, showed a month-over-month increase for October 2022 of 12.9% and a year-over-year increase of 48%. Making headlines over the past couple weeks, we have heard Apple (AAPL) pause hiring outside of R&D and we have seen Amazon (AMZN) halt "new incremental" hiring across its workforce. Qualcomm (QCOM) has also frozen hiring. Moving on, Intel (INTC) is cutting jobs as are Lyft (LYFT) , Seagate Technology (STX) and Upstart Holdings (UPST) . Do we need to mention Elon Musk's Twitter, where supposedly as much as 50% of its workforce will face layoffs that could start today.

Thursday brought a second day of Fed-inspired weakness to financial markets. That said, there was some strength seen across markets mid to late afternoon that ultimately gave way to program selling as the closing bell approached. The deal is this: Even with equities and Treasury securities showing weakness, the data will still have the largest say in just how aggressive the Fed can be. We can all look into our own crystal balls and see something different. A past built upon statistics, though still "fudge-able," is less open to opinionated or biased interpretation.

That makes macroeconomic events such as releases concerning job creation, participation, wage growth and inflation market drivers of immense focus right now. That's just the way it is, and leadership will be provided by high-speed, keyword-reading algorithms, so enjoy.

Yes, most of our major equity market indexes did sell off on Thursday as losers beat winners by a rough 3 to 2 at both of New York's leading exchanges. That said, aggregate trading volume decreased day over day for names listed on the New York Stock Exchange and Nasdaq as well as across both the S&P 500 and Nasdaq Composite. Not that Thursday was meaningless. It was just less meaningful than either Wednesday or Friday (today).

One technical note of caution: On Thursday, I wrote to you that the Nasdaq Composite stood only 4.2% from undercutting its Oct. 13 low after it surrendered its 21-day exponential moving average (EMA). Well, that index gave up 1.73% on Thursday.... 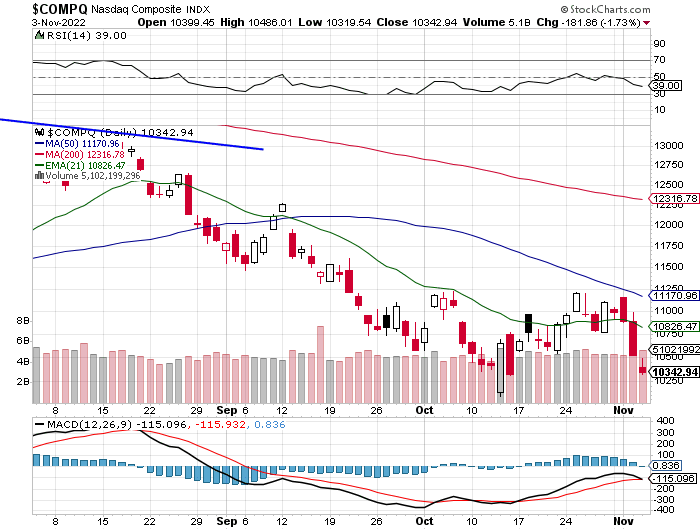 This leaves the Nasdaq Composite just 2.5% above that low, with a daily moving average convergence divergence (MACD) that just experienced a bearish cross-under of its 26-day EMA by its 12-day EMA. I know, US equity index futures have been trading higher through the wee hours. That may hold. The jobs data will get the last say on that today.

Anyone Else Notice That...

... the National Association of Realtors released data on Thursday that showed first-time US homebuyers in 2022 at an average of 36 years old, which is up from 33 years of age in 2021 and is the oldest average age on record. The average age of repeat purchasers increased to 59 in 2022, also the highest on record. All while the percentage of homebuyers buying a home for the first time dropped to 26% (the norm is around 40%), and the percentage of home buyers described racially as either White or Caucasian increased from 82% in 2021 to 88% in 2022.

Draw your own conclusion, but it would appear that higher interest rates have more than offset any benefit to the accessibility of this market that may have been achieved due to the stalled increase in average home prices.

It's November 2022. That means starting this month a phased withdrawal of the US Air Force's last F-15 Eagles from Okinawa will commence. As the US Air Force is under-strength in terms of fifth-generation fighters needed to replace these older aircraft, modern fighters will deploy to the region on rotation rather than be permanently stationed there.

US forces do not have the F-22 Raptors or the F-35 Lightnings necessary to plug all the holes. This is no time to allow Chinese or North Korean perceptions of American capability in the Pacific to appear weakened. The US "only" spends a rough 3% of GDP on defense these days. The historical norm is between 5% and 6%. We can either make this a priority or not. Yes, there are other priorities. In my opinion, deterrence is probably far cheaper in terms of lives and treasure than is forced reaction born out of emergency.

The chief beneficiary of any "catch-up" program that increases production (which is not currently likely) of fifth-generation fighters would be Lockheed Martin (LMT) . Other key contractors would include Northrop Grumman (NOC) and BAE Systems (BAESF) . Cheaper options would include modernized fourth-generation fighters such as Lockheed's F-16 Falcon and Boeing's (BA) F-18 Super Hornet.