A reflection of what? I'll let you know.

For equity markets, one day appears as merely opposite the day prior. In direction. In breadth. All the while, trading volume continues to dwindle. All the while, the S&P 500, as well as the Nasdaq Composite, skate just below that line -- the 50-day simple moving average (SMA) -- that still needs to be taken.

More specialized indices, highly reliant upon domestic economic growth, such as the Dow Transports or the Russell 2000 (small-caps), still look up at their respective 200-day SMAs in addition to the 50s. Likely, I think that perhaps the market's more active participants have sat on their hands, waiting for words yet to be spoken from Jackson Hole, Wyoming, or Biarritz, France, where G-7 leaders will gather this weekend.

As I approach this edition of my daily missive, what many consider late night fades into what a few of us consider early morning. The spread between the yields of the U.S. two- and 10-year notes remains un-inverted, though the two did converge yet again late in the Wednesday session. Flash PMIs have just printed across Europe. The Continent's manufacturing sector continues to exist in a state of deep slumber as new orders, backlogs and employment all display varying levels of damage.

I imagine most of you noticed U.S. equity markets rally over the last 75 minutes or so on Wednesday as the yield curve re-flattened. Perhaps you also noticed the note posted on the Bureau of Labor Statistics (BLS) website on Wednesday. Much more important than the three-week-old Fed minutes.

Startling? How easily is one startled. The BLS released the agency's preliminary estimate of its annual benchmark revision to job creation. This annual estimate is benchmarked to the month of March, in this case March 2019, and finalized in February, so Wednesday's preliminary estimate revision will not be finalized for another six months. Now, for the stunner. This annual revision to non-farm payrolls averages plus or minus 0.2% over a 10-year period. This year's estimate for revision is starting out at minus 0.3%, or minus 501,000 non-farm payrolls.

Wait. What? That's right. It looks like from March 2018 to March 2019 the economy may have created 501,000 fewer jobs that we had previously thought. The most impacted areas will be Retail, Professional Services, and Hospitality.

Hold on a minute, Sarge. So, less jobs than thought? Right. Now, go on. If

1) fewer folks are employed than we thought... and

2) wage growth appears to have stagnated while

3) participation has increased... and

5) the consumer is carrying the economy...

Hmmm.. you guys ever play that game "Jenga"? No, we're not playing Jenga, but we can't mess around. Let's hope the crew in Jackson Hole sees the forest, not the trees. Their track record leaves doubts.

What Must Be Understood

Yield curves and currency exchange rates matter. I know that you see members of the Federal Open Market Committee (FOMC) and others from the financial community downplay the impacts of an inverted curve. By the way, the three-month/10-year spread has remained inverted for months. That should have set alarms off in the spring. These factors undoubtedly slow business spending as well as dent confidence, which in turn has an effect on the real economy.

It appears the U.S. manufacturing sector is participating in a global manufacturing recession. What's that, a roughly 12% plus of the U.S. economy already in a state of recession? Show of hands: Anyone think that passes muster? Now the consumer makes up roughly 68% of the economy. Slow the workweek, slow confidence, Just where do we think we are?

Listen, I believe that credit at term should have a cost. I believe in a hard yet flexible money supply, and I believe that currency should be backed by more than good faith. I am not the kind of economist who most would usually consider dovish.....

The sole reason that I currently support aggressive policy at the short end of the curve is to attempt to re-establish control over both the yield curve as well as currency exchange rates.

Foreign accounts have taken this control away from domestic markets. The thing I would like to see is simple removal of policy error. Yes, the December rate hike was obvious error, even at the time. The error in policy goes far deeper. While the impulse to reduce the Fed's balance sheet was correct, the initial mistake in judgment was the aggressive pursuit of elevated short-term interest rates coupled with a rather aggressive removal of money supply (quantitative tightening) simultaneously. It's not like we did not warn the Fed at the time, over and over. They chose ignorance.

Purists will claim that fighting a trade war is not part of the Fed's mandate. The mandate deals only with price stability and maximum sustainable employment. Well, now we likely know that there is probably more slack than thought in labor markets, and Core PCE (personal consumption expenditures) has not yet forced any hands. Oh, and just from me -- your country is in a trade war, intended to balance long-term wrongs. Was the U.S. supposed to just never push back? Do you even know that fiscal policy is over-extended? Do you even weep when the colors pass? I know I do.

Aggregate demand. According to plan, a dollar spent hopefully results in more than a dollar of output. Hmmm. What if a whole mess of dollars were spent, but there was not the desired impact on the velocity of money? What if dollars spent were just what they look like... increased deficit spending?. What if... no, let's change that.... when does the Keynesian multiplier not just erode, but turn negative? You see Japan. Yes, it is in even worse shape. We have time? Hopefully.

Demographics are not an asset there, nor are they here. Clearly aggressive, easy fiscal policy coupled with easy monetary policy will not work indefinitely? Where does that leave the global debt super-cycle? In need of a re-set would be the answer not a soul wants to hear. I don't know where the road leads. I do know that we are on that road.

The Congressional Budget Office (CBO) surmises that the U.S. budget deficit will possibly rise to $960 billion for the full year (4.5% of GDP). Projected deficits over the next 10 years are now expected to total $12.2 trillion. Somehow, the CBO sees federal debt as a percentage of the U.S. economy at 79% this year and rising to 95% in a decade.

Can't make this stuff up. If one were to include the aggregate debt of state and local governments, businesses and households, total U.S. debt amounts to more than $74 trillion. Now add all state spending, business and household activity to GDP.. oops, it's already in there. Uh oh.

The total debt to GDP ratio now stands at 347%. Probably nothing to worry about. Go back to watching adolescent kids fall off skateboards on YouTube. Way more interesting. I'll be storing clean water and canned beans in the garage.

What's the best part of China's threat to sanction U.S. companies in response to the State Department's approved sale of 66 updated F-16 fighter aircraft to Taiwan as a major part of an $8 billion deal? Yes, this is for shareholders of my favorite defense and aerospace name, Lockheed Martin (LMT) . Lockheed Martin manufactures and sells the F-16. Lockheed manufactures and sells the F-35 to Japan. Lockheed does sell civilian Sikorsky helicopters to Chinese accounts, but not to this degree. In other news, you may have noticed earlier this week Lockheed's $56 million contract award by the U.S. Navy for Ship Self-Defense System (SSDS) Combat System Engineering Agent (CSEA). The work is to be completed this calendar year.

Is it time to get back into Salesforce.com Inc. (CRM) ? Earnings growth is expected to contract by roughly 11% at Salesforce, which is a holding of Jim Cramer's Action Alerts PLUS charitable trust. That's new for this firm. Revenue growth is projected at 20%-ish, the slowest growth in many years. We already know that Salesforce is digesting a number of acquisitions. Success in this progress will be difficult to determine, as the Tableau Software deal closed in early August. 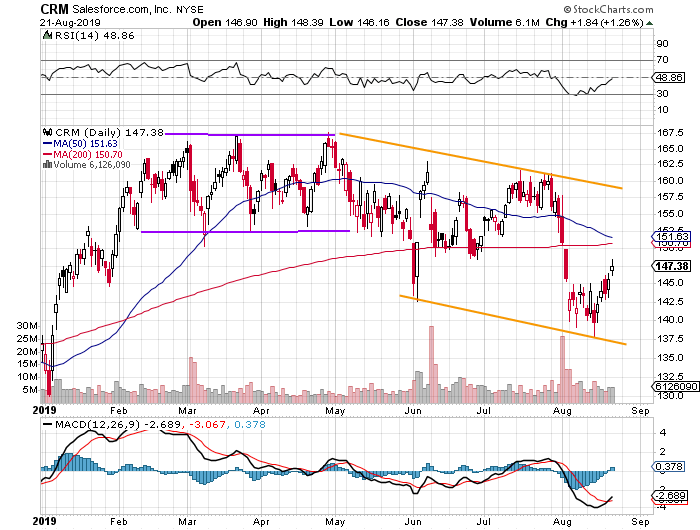 I may be wrong, but I am sitting this one out. After the basing pattern that ran from February through April broke, the stock price has experienced what appears to me to be a downward-sloping channel without any real definition. I think if perhaps this channel had created more repetition at the top and/or bottom, that perhaps there could be an options strategy I could devise at reduced risk with a probability of success worthy of that risk. Ahead of earnings, this one looks to be something of a gamble.

Get an email alert each time I write an article for Real Money. Click the "+Follow" next to my byline to this article.
TAGS: Economic Data | Economy | Federal Reserve | Investing | Stocks | Treasury Bonds | Aerospace | Defense | Software & Services | Real Money

A Bristol-Myers Bounce? Here's How I'd Play It

The More I Know, the Less I Understand

Can you please name me an industry that isn't impacted by this inflationary monster?

With Quanterix, I'm Charting Out My Options

Let's see how this one plays out into Friday for a potential opportunity.

This Is a Very Broad Market Move

This action should help to set the stage for some good trading into third-quarter earnings.

This Oil Major Cut Its Dividend, but Don't Dismiss It

BP slashed its dividend because of the pandemic, but the stock is still offering an attractive 5.3% dividend yield, with a solid payout ratio of only 40%.