"During the 1970s inflation expectations rose markedly because the Federal Reserve allowed actual inflation to ratchet up persistently in response to economic disruptions -- a development that made it more difficult to stabilize both inflation and employment."

The hours run short until the Bureau of Labor Statistics releases results from that agency's twin employment surveys (Household & Establishment) for the month of June. Professional consensus for the Non-Farm Payrolls (NFP) number has been drifting slightly higher all week and now stands in a rough range spanning 710,000 to 725,000 as Wednesday's ADP Employment Report surprised to the upside for June (692,000) while the May number was revised lower.

This Non-Farm payroll number as a proxy for job creation at the national level stands as the most focused-upon number in our entire macroeconomic universe as job creation is the key measure for aggregate demand for labor. That is where it all starts; beyond demand for labor comes wage growth, and then increased velocity of money that produces at some point sustainable consumer inflation. As readers can see down below, I am a touch below consensus today, at 683,000.

The high end of the consensus range for today's NFP number is in the mid-900,000s. Let's hope that highly optimistic economist, whoever he or she is, is much closer than I.

How interesting that equity markets showed solid and broad strength on Thursday, the first business day of the third quarter. Some quiet and perhaps boring action ahead of Jobs Day, which itself comes ahead of a three-day weekend, you say. A clear sign that perhaps there was some capital at the ready to be deployed or re-deployed, I say, as clear leadership came from some parts of our beloved marketplace that had been most forgotten of late -- namely, the Transports and the small- to mid-cap stocks.

These are the kind of stocks that are more reliant upon growth in the economy and/or in the business cycle than in their own ability to grow sales in isolation. The caveat, unfortunately, would be that there was no confirmation of such a turn in investor sentiment visible across the day's sector performance tables using SPDR ETFs as proxies. While Energy XLE led a day where 10 of 11 sectors shaded green for the session, that performance was skewed by the somewhat disappointing OPEC Plus production meeting, while second and third place for the day went to more defensive sectors -- Utilities XLU and Health Care XLV, respectively.

That was impressive for the Utilities as that group among all value types remains relatively expensive in terms of valuation and the sector gained for the day despite a U.S. 10-year Treasury note that showed some mild weakness as that particular yield backed up to 1.47%. (I see that yield back down to 1.45% at zero dark 30 Friday morning.)

Oh, and do not become alarmed by lower trading volume across both the New York Stock Exchange (NYSE) and Nasdaq on Thursday as this is typical of calendar flips from one quarter to the next. Breadth was overwhelmingly positive in aggregate for names listed at both exchanges.

I don't know how deeply some readers go into the monthly ISM Manufacturing survey. For June, the headline number fell short of expectations but still printed at a very healthy 60.6. The tale told by the various individual components that comprise the aggregate number that prints as the headline told a dangerous story, however. New Orders (the most important part of any manufacturing survey) and Production stayed strong. No problem there.

Now hear this. Prices soared to a practically unheard of 92.1 from what was already a terrifying 88.0 in May. This happened while Employment actually dropped into contraction (just barely) at 49.9 from a (just barely) expansionary 50.9 in May. All while customers allowed their inventories to dwindle further. Either allowed, or could not find supplies necessary to build those inventories.

Not exactly stagflation in microcosm because there is still growth in manufacturing, but out-of-control pricing coupled with employment in decline (though manufacturing is far smaller in impact than services) is the seedling from which overall economic recessions are born.

Hold Off on the High Fives

Much was made of the "historic" agreement where 130 of the 139 nations that make up the Organization for Economic Cooperation and Development (OECD) signed up to force multinational companies to pay a global minimum corporate tax rate of at least 15%. The idea is to get big tech companies to allocate 20% to 30% of profit in excess of a 10% margin to the countries where they operate based upon sales.

There are several significant catches before this global minimum tax would be implemented, probably by 2023. For one, this must get through national legislatures, including in the U.S., which is where most of the companies that would be hurt (see their taxes rise) are headquartered. There will be serious contention there. In addition, it is no surprise that any nation in the G-7 or G-20 would sign up for such a plan (most have) if large American companies are operating there as they have only something to gain and very little to lose.

Notice that nine of the 139 OECD nations refused to sign on, including Ireland, Hungary and Estonia. Why would they do this? Perhaps because through tax policy these nations believe their economies have gained a competitive advantage and they will not be quick to surrender this advantage. Ireland, by the way, is the European headquarters for both Alphabet (GOOGL) and Facebook (FB) , which just happen to be two key targets of this whole adventure in the first place.

Oh, did I mention that Ireland is in the European Union (EU), and the way the law reads (which I have no idea if it stands up or not) would be that EU votes must be unanimous when considering large legal changes that impact the entire union. Thus, it is possible that Ireland's decision to not sign on could force the entire 27-nation group to not sign on.

Bottom line? This is perhaps progress, but acting as though this is any kind of policy victory for anyone is very premature. Very. So far only nations that would end up as beneficiaries have signed on, which was expected.

One risk to the economy that gets very little press outside of economic think tanks is the fear that economic expectations become unanchored. This purely psychological economic factor has, unfortunately, the ability to drive inflation all by itself, and not the kind of inflation that policy makers desire, slow and steady, just enough to ease the burden of servicing debt through the use of somewhat cheaper dollars. All while the public barely notices because the size of the economy, wages and velocity all rise in some kind of loose coordination along with prices.

Remember, those of us of a certain age who have lived through persistently higher inflation that was in some part due to elevated inflation expectations (the 1970s) have a serious fear of allowing consumer inflation to fester, at least to a far greater degree than those too young to remember those years. Whom among us can forget what the Fed (Paul Volcker) had to do in order to arrest that nearly runaway inflation?

On Thursday, the (notoriously inaccurate) International Monetary Fund (IMF) increased its projection for U.S. 2021 GDP growth from 6.4% to 7.0%. The IMF did so based on unprecedented fiscal (more to come?) and (now rather inappropriate) monetary support, combined with declining (say a prayer) COVID-19 case numbers that would allow sustained improvement in demand for services as well as permit a rebuilding of inventories for goods.

The IMF also sees the Federal Reserve Bank drawing back on its asset purchase program by the first half of 2022. On that note, there is one key Fed official who definitely seems to "get it." Philadelphia may not occupy a voting seat at the FOMC table again until 2023, but Philly Fed President Patrick Harker is not being shy about how he feels. Asked on Thursday (which can be found in The Wall Street Journal) about whether the Fed should get the ball rolling on tapering its quantitative easing program, Harker flatly stated "Yes" and then added, "I would like to see the tapering begin. I'd like to see it happen sooner rather than later. I'd like to see it being a slow, methodical process."

On that, I'd like to add that the FOMC can start by halting all purchases of MBS (mortgage-backed securities) as soon as four to six months ago without hurting the general economy. Haven't those markets been skewed or even harmed for long enough? Have we not set back this younger generation decades through reckless policy that forced them out of participating in real estate markets en masse? Have they not delayed household formation for far too long? Have we been shouting alone in the darkness all this time? Perhaps not. Perhaps, at least Patrick Harker has been paying attention.

...about an early pandemic-era Sarge favorite that we haven't thought about in a while -- Veeva Systems (VEEV) . 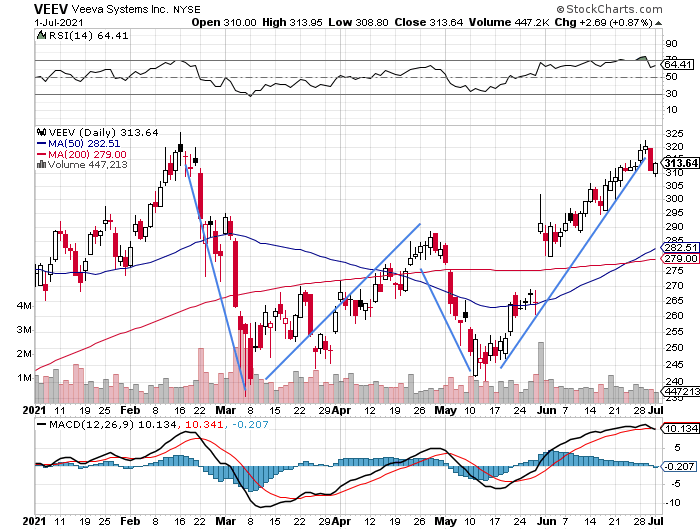 If you see a double bottom pattern, then the stock broke out from a $287 pivot in early June and peaked. Relative strength is coming off of an overbought reading and the daily moving average convergence divergence (MACD) is starting to soften. Leave it alone. Don't touch it. 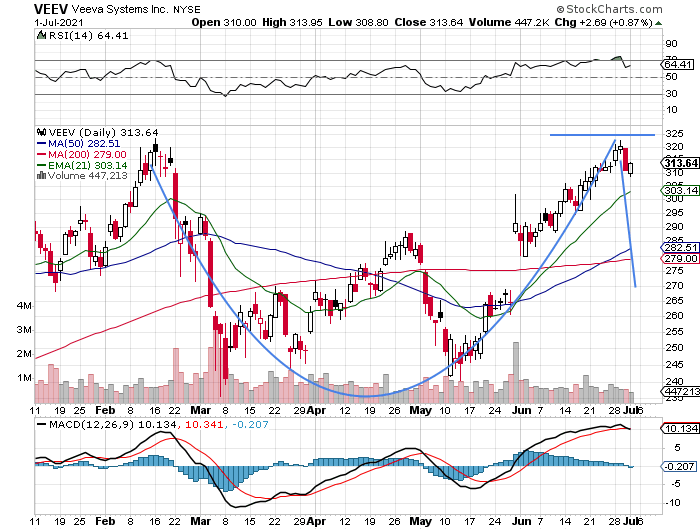 However, if you see a cup that is just starting to build a handle, then that handle potentially could be deep enough to fill the $270 to $280 gap created in late May before making a run at a new $325 pivot.

Fantasy? Maybe. In the meantime, September VEEV $270 puts are paying more than $4, and for the real daredevils out there January $270 puts went out Thursday night with a $10.90 bid. Food for thought.