By STEPHEN GUILFOYLE Dec 02, 2022 | 07:33 AM EST
Stocks quotes in this article: BX, XLC, XLF, XLY, MRVL, AMD, NVDA, HAL, CBRL, MANU
Fierce is the gale
On the north sea
We drink and rejoice from the chalice
Holding the course
Through long nights and days
The ice and the hail bears no malice
The storm in the night takes us there
On an unrelenting tide
As the wind drives us ashore
Halls of Valhalla

So it is that we arrive. This day. Unlike any other day. Yet similar as a series of tests culminates with perhaps a rhyme. As it has been destined from the start.

Will we hear the echoes of joy ringing through the streets and halls of those fearless enough to take the cup and participate? Or is it that no one will ever hear the poor, wretched souls who wander aimlessly, seeking victory unrealized? Wearing wet clothes and boots as the temperature drops. As needs become wants, As wants become hopes. As hopes wither and die.

For this day is Jobs Day, my fellow pilgrims. The week has already delivered a less-than-confident consumer, a paltry level of private sector job creation, endlessly rising continuous jobless claims, precipitously diminished job openings, contracting data on construction spending as well as twin manufacturing surveys that scream "recession." Readers probably noticed that the Atlanta Fed very quietly revised its real-time Q4 GDPNow model from +4.3% down to +2.8% (quarter over quarter, seasonally adjusted annual rate) on Thursday. Not that 2.8% would be bad, coming off of the third quarter's 2.9%. That said, the quarter is not over, and economic contraction is expected by Q2 2023.

So, I must ask this burning question of the good people of our glorious union of noble piety. Is bad still good, and good still bad? Are we as traders, most of whom are likely net-long equity, coming in rooting for poor November survey results from the Bureau of Labor Statistics this morning? Do we hope to see numbers that would prompt a Federal Open Market Committee (FOMC) now apparently willing to slow down its aggressiveness to commit to some kind of truce? A less aggressive stance?

On the other hand, do we root for our nation's economy and the welfare of our apparently ever so distant "kin" over directional market impact? Hmm? Have we become so perfectly imperfect? So darned impure.

Gee whiz. That was awful. Printed in the hole. Both surveys.

On Thursday, the S&P Global Manufacturing PMI hit the tape at a revised 47.7, which illustrates a state of fairly deep contraction. This was the third consecutive month of headline contraction for the series and came one day after the Chicago PMI printed at a ghastly 37.2. That made November the worst month of the year for Chicago-area business activity since the height of the pandemic shutdowns in 2020.

Chris Williamson, who is chief business economist at S&P Global Market Intelligence, commented: "A combination of the rising cost of living, higher interest rates and growing recession fears have led to slumping demand for goods in both the home-market and abroad. Companies are consequently cutting production at a pace not seen since the global financial crisis, if the initial pandemic lockdowns are excluded." Yowza.

Now to the ISM manufacturing Index, which is basically a PMI survey and has been around longer and seems to be more closely followed by US-based economists. The survey's headline number hit the tape at 49.0, the first print for this series in contractionary territory since summer 2020. New Orders (the lifeblood of any manufacturing-focused survey) plummeted to 47.2 from an already contractionary 49.2 in October. Employment went to the dark side as well at 48.4. Indeed, Supplier Deliveries, Customer Inventories, Order Backlog, Export Orders, Imports and yes, even Prices, all printed in various states of decay.

What does this tell you? After regional manufacturing surveys out of the Fed's Philadelphia, Richmond, Dallas and Kansas City districts all also printed deep in the hole? (Somehow NY escaped.) Especially given the national significance of the survey out of Philly?

It tells me that there are rough seas ahead. Unless, that is, the service sector can carry the economy as it has done before. On that note, the S&P Global Services PMI flashed at 46.1 in November, which would make November the fourth consecutive month in contraction for that series. S&P Global will revise that number and the ISM will post its data this Monday. That ISM survey has been decelerating since last year, but is yet to see outright contraction.

That Blackstone (BX) has limited withdrawals from its real estate investment fund (valued at a supposed $125 billion) in response to a recent surge in redemption requests? The Blackstone Real Estate Income Trust apparently only approved 43% of these redemption requests in the month of November. What does that mean?

Gang, it means the rich kids are either getting their tails kicked in commercial real estate (or they expect to) and they want to go to cash. Yesterday. Seems healthy.

I read across several financial media sites that I follow that Thursday's equity market action was disappointing, as there was no follow-through to Wednesday's rally. My take was quite different. I saw the lack of price movement on greatly reduced trading volume on Thursday as relatively positive.

I mean, these markets experienced a tremendous run, really over just 150 minutes or so on Wednesday afternoon, and managed to somehow hold most of that ground newly taken throughout the entire session on Thursday. I do get that the action would be somewhat limited the day after Powell speaks and the day before the BLS pukes its monthly data, but in a vacuum, this is impressive.

Remember, we're not seeing great things into 2023. We are loyal to nothing in regards to strategy and tactics. We are mercenaries and we are only trying to make as much dough as we can in December, because 2023 could get ugly. So, we have unsheathed our mighty swift swords and we have waded deep into the melee for now, as we expect to likely have to use our shields far more than our sabers in the short- to medium-term future.

For those who thought Thursday was so bad, the S&P 500 gave up a whopping 0.09%. Not a misprint. The Nasdaq Composite gained 0.13%. Oh, this is awful. Make it stop. The Russell 2000 was gashed for 0.26%. Of the 11 S&P sector-select SPDR ETFs, five closed higher with Communication Services (XLC) leading the upside at +0.58%. Five closed lower with the Financials (XLF) leading the downside at (ready for this?) -0.58%. There was one fund that closed for all intents and purposes unchanged. That was the Consumer Discretionaries (XLY) .

As far as breadth is concerned, winners beat losers by 5 to 4 at the New York Stock Exchange and by 6 to 5 at the Nasdaq. Can you believe this carnage? Advancing volume took just a 47.2% share of composite NYSE-listed trade but a 58.5% share of composite Nasdaq-listed trade. Aggregate trading volume decreased by 31.2% day over day for NYSE-listed names and by 22.5% day over day for Nasdaq-listed names.

The yield paid by the US Ten Year Note dropped 18 basis points on Thursday as the US Dollar Index skidded all the way into the 104s. The all-important Ten-Year Note/Three-Month T-Bill yield spread just keeps getting more deeply inverted...

I cannot yet hear TINA (there is no alternative) alling our name, but I can still see her face. She's out there. So, I'll ask again, my faithful legions. Are we rooting for bad is good, or is good now bad? Perhaps bad will just be bad. This is why mortals fear the dark. The FOMC is a less likely dance partner than in years past. Maybe if it just shuffles its feet a little. We'll play the music.

In August I sold most of my Marvell Technology (MRVL) long. In early November, I bought back enough to bring the position back up to 25% of its pre-August size. I fully expected to add on Thursday night's weakness. I have not. The third quarter was OK. Beats for the top and adjusted bottom lines. However, inventories have become an issue as they have for most of the semis. For the fourth quarter, the revenue guide is well below consensus, as is guidance for adjusted EPS. I mean, way below.

Looking at the balance sheet, inventories are 30% of current assets, goodwill and other intangibles make up 75% of total assets, and the debt load runs at 5.4 times the net cash position. I have come to the conclusion that my sales in August were correct, and my decision to start rebuilding the position going into earnings was not. Instead of adding on this dip, I will be working my way out of exposure to this name.

I remain long Advanced Micro Devices (AMD) and Nvidia (NVDA) in the semiconductor space, both at greatly reduced levels from earlier this year. Both at increased levels since the Oct. 13 market trend reversal.

Pretty as a Picture

You do not see a pattern this well-defined every day. Sarge name Hallibuton (HAL) has now built a nice-looking cup with handle and is trying to move toward pivot. In addition, HAL is set up for an almost imminent "golden cross." 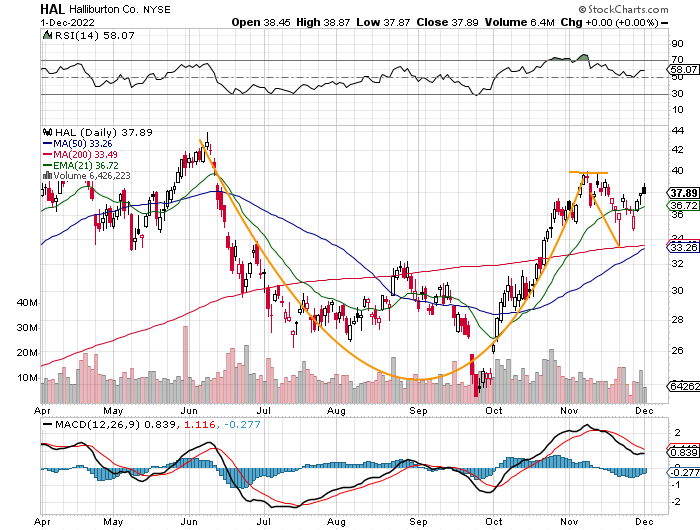