Had a long hard day on Thursday, cleaning up the damage done by the remnants of what had been Hurricane Ida when it had hit the Gulf coast of Louisiana a few days ago. I had never seen flooding like that before, at least not in my capacity as a private citizen. By day's end, my body ached. I am not the young man I sometimes think I can be. I laid down on my couch with one of my history books. Next thing I know, it was 03:56 Friday morning.

I start working on weekdays at 03:30 like clockwork. Not today. I'm late. It's Jobs Day! Holy crap. I'm late and it's Jobs Day. That hasn't happened since... I don't think that's ever happened. Well, rise, you worthless puke. God has granted you another day on this side of the dirt. You gonna use it? Or you gonna punk out like just everyone else? Wind it up. Wind it up like it matters. Wind it up like someone is coming to take from you and yours. Because they are. Get dressed, and... Get. Fired. Up.

Check your gear. Make sure everyone has what they need, what you've been told they need, and what will be expected. Carry rations for two days, three sources of water, and clean socks. We go operational at 08:30.

I know it ain't fair

I broke your heart, yeah yeah

Aggregate trading volumes slowed significantly on Thursday ahead of Friday's release of the Bureau of Labor Statistics (BLS) employment surveys for August. Indeed, trading volumes have been light for most of the second half of summer, with the exceptions of month-end events. Breadth was positive on Thursday as the S&P 500 and Nasdaq Composite pushed ever so softly further into record territory before closing off of their highs. Again, small-caps and the Transports (led by the truckers and maritime transport) outperformed large-caps. Sector performance was scattered, with a mix of cyclical and defensive sectors near the top. Using sector select SPDR ETFs as proxies, Energy (XLE) , Industrials (XLI) , Health Care (XLV) and the Utilities (XLU) all scored gains of close to a full percentage point or more. Growthy-type sectors fell out of favor on Thursday, as Technology (XLK) and Communication Services (XLC) repainted some black doors red. Real weakness for the session was visible across Internet stocks. The Dow Jones US Internet Index took a 1.1% tumble on Thursday.

So many traders, or at least the ones who have been at work this week, have been waiting for this August Employment Report as if it matters so much in regards to the trajectory of future monetary policy. As readers know, I have been downplaying the importance of this single month's data. Understand a few items. Federal Reserve Chairman Jerome Powell has made clear that he and his crew want to get the ball rolling on winding down the balance sheet expansion program, but his focus is more on reaching levels of maximum sustainable employment than on stabilizing prices. That tells you right there that interest rate and inflation are secondary to supporting economic growth and improving labor market demand.

You may see a decent number for job creation on Friday. We have already seen a very disappointing ADP release for private-sector job creation. The ADP data and the BLS data do not always jive. Remember, the BLS still relies upon surveys and then adds a ton of salt and pepper to get to their numbers. ADP salts and peppers its data as well, but ADP data is reliant upon.. anyone, anyone? You, in the back. Correct! ADP data relies upon data. Hence, the two reports for monthly job creation often vary wildly from month to month, but most years over a 12-month average, they do actually end up being ballpark close to each other.

That's why, in my opinion, though many school districts probably added staff in preparation for in-person learning, in terms of impact upon the thought process of our central bankers they will wait another two months to move any levers so as to assess how well the economy absorbs those 11 million individuals being thrust upon the labor market next week. We need to see the evolution of the labor market participation rate, the unemployment and underemployment rates, and not only wage growth but average workweeks.

So, as you will see below, I am a little above consensus for August Non-Farm payrolls at a seasonally adjusted 739,000, with most of the street within spitting distance of 725,000. What really matters right now, I think, is rapidly slowing economic growth. You all saw Morgan Stanley reduce its estimate for third-quarter GDP to 2.9% (q/q SAAR) all the way from 6.5%. Just an FYI: the Atlanta Fed's GDPNow model is running at 3.7%.

Something else to remember is that we don't really know what came first. The chicken or the egg. Congress has some grand plans for fiscal policy, but it needs to address the debt ceiling first, and once it does that, the Fed is going to need to create the dough so the Treasury Department can borrow it and do so well below what would be market prices for credit over time if I were made king. Long live the sovereign debt supercycle, for its abuse will one day ruin us all, but until then.... Music, maestro.

The Great and Powerful Oz

You can't escape the hours, you lose track of the days

The more you understand, seems the more like you do

You never get away, everybody wants you

U.S. Sen. Joe Manchin of West Virginia wrote the lead Op-Ed at The Wall Street Journal's website late Thursday afternoon. Manchin is clearly uncomfortable with the size of the $3.5 trillion budgetary framework (not a binding bill) passed by Congress in such fashion as to blunt the possibility of a filibuster when it reaches the Senate. Just one thing: Speaker Pelosi has guaranteed a vote on the $550 billion to $1 trillion (depending on how you count) infrastructure bill by Sept. 27 as long as there is also a vote on the much larger fiscal spending package. Pelosi may not have the votes in the House, and Schumer may not have the votes in the Senate even if only a 51-50 (VP tiebreaker) vote is required. Not without Joe Manchin, and not without his similarly minded if less audible Arizona colleague Kyrsten Sinema.

Manchin cites the already overwhelming federal debt. Manchin asks the important questions... What if the pandemic gets worse? What if a "next financial crisis" arises? What if a large-scale terrorist attack or international conflict is forced upon the nation? All good, serious questions. Manchin wants to slow things down on federal spending. So do I, but I have always been fiscally conservative, so for the new readers who don't know me, welcome aboard... and understand that I am aware that I have a bias here. In the piece, Manchin casts shade on both the Republicans for their behavior in passing the partisan tax bill in 2017 and on the Democrats for their behavior now. Manchin shows great concern to current levels of inflation, probably because he for the most part represents middle-income folks who have great concerns over current levels of inflation.

I can't tell you whether a spending package will pass outside of the infrastructure bill. The market has clearly priced that bill and at least part of that larger package. The debt ceiling will be dealt with. The spending package is likely whittled down in size and scope in order to get something across the goal line. Taxpayers will have to pay for it through the Federal Reserve. One thing is certain, or at least I think it is. When whatever passes, passes... West Virginia will get more than its share of the entire pie.

As part of that proposed $3.5 trillion spending package, the Biden administration has built in $80 billion to spend on effectively doubling staff size at the IRS (Internal Revenue Service) while targeting enforcement. The Biden administration had estimated that this $80 billion would bring back $316 billion over 10 years, helping to pay at least something toward the budget over that time.

The CBO (Congressional Budget Office) came back with its estimate on Thursday afternoon. Now, remember neither the CBO nor any president's administration in my memory has had an especially accurate track record in making financial estimates, but the CBO only sees the beefed-up enforcement generating $200 billion over 10 years, 37% less than the president's team had envisioned.

... in response to an Israeli study showing a dramatic improvement in protection among recipients of a third dose of the Pfizer PFE/BioNTech BNTX COVID-19 vaccine...

If the gains last: "You're going to have very likely a three-dose regimen being the routine regimen."

On concerns about this new "Mu" or B.1621 variant discovered in Colombia....

"Even when you have variants that do diminish somewhat the efficacy of vaccines, the vaccines still are quite effective against variants of that type."

Feel better? Me neither.

I did initiate American Eagle Outfitters (AEO) on Thursday's earnings-related dip. As advertised. Entry-level size position. Did not have time for much else as I was up to my knees in muddy water for most of the session. At least a lot got into the trash that needed to get into the trash. 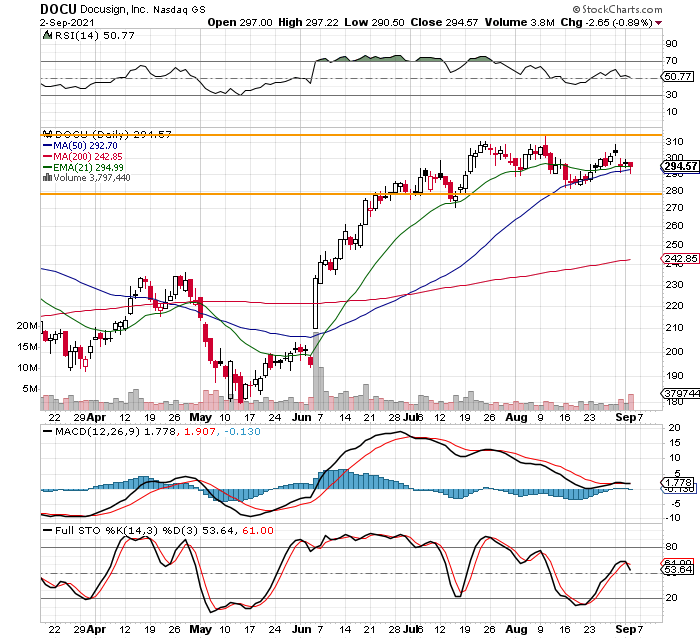 Readers will note that DOCU has been stuck in a consolidating basing pattern (fancy Wall Street talk for a range) since late June/early July after increasing a rough 75% from mid-May into mid-July. The thing is, at these levels, right now, with all of our analysts (or at least the one I watch) seemingly neutral on the name, the shares are running sideways for days in between the 21-day exponential moving average (EMA) at $295 and the 50-day simple moving average (SMA) at $292.

This stock is likely to lose (or gain) both the swing crowd as well as a given degree of portfolio manager allocation simultaneously once the algorithms that determine price discovery decide which side of those two lines the name is going to go on into the three-day weekend.

My plan? Do nothing tight. Reinitiate small should the shares approach either end of the basing pattern (range). I can't tell you what to do, but I don't look for trouble going into any weekend, especially long ones... especially if markets have been one-way streets of late.

Get an email alert each time I write an article for Real Money. Click the "+Follow" next to my byline to this article.
TAGS: Earnings | Economic Data | Investing | Jobs | Politics | Stocks | Fintech | Software & Services | Technology | Real Money | Coronavirus