Prepare thyself. For the furor. For the overreaction. For the revision. Oh... I do see a revision in our very near-term future.

Just as a reminder, about a month ago, the Bureau of Labor Statistics released a Non-Farm Payrolls (NFP) number that badly disappointed the community of economists with a print of 266,000. Consensus had been for something just under 1 million jobs created. Never mind these government agencies charged with keeping track of such things continue to seasonally adjust the data with whatever salt and pepper they deem necessary. The "real" or unsalted number for April was a cool 1.1 million jobs created, so our economist friends really were not all that far out in the woods after all.

What that means to me is that mistakes have been made. I know I have fought and lost this argument with fellow macro-nerds for decades. I have always maintained that the public, not to mention the media, needs to focus on the raw data, that human beings are smart enough to realize that in normal times there are seasonal trends. That's why we compare corporate performance in terms of focus to year-ago data and not so much on sequential (quarter over quarter) numbers. Because we do have a (very) basic level of cognitive ability. Duh.

You do know that in February and March the headline NFP print hit the tape (after revision) at 536,000 and 770,000 (respectively) going into that 266,000 number in April for a three-month total of 1.572 million jobs. You probably did not know that the raw number for all three months actually showed "real" job creation of 3.5 million payroll positions. In all honesty, even if you are one of those economists who has confronted me over the years on the validity of seasonal adjustments, does not the "salt and peppered" job creation three-month total of less than 1.6 million present to the public a vastly different narrative than the "honest" three-month aggregate of 3.5 million jobs? I mean, gee whiz.

We all know that there are imbalances across domestic labor markets right now. Every storefront in every town that did not close in the last 12 months has a "help wanted" sign in the window. The supply side of that labor market, at least for now, at the lower bound of the income curve, is to put it bluntly "on strike" and, in part, will remain so until fiscal support is either reduced (as has happened in roughly half the states) or withdrawn. That's the story here. Wage growth toward the bottom of that curve. There is surely a place on the curve where supply meets demand. That, however, will be a second-half 2021/first-half 2022 story of margin compression that would lead in some pockets of the economy where there is pricing power to a more structural increase in core inflation.

... the ADP Employment Report for private sector job creation (which is also seasonally adjusted) crushed expectations for May with a 978,000 print on Thursday morning. This brings the ADP three-month aggregate total including revisions to just under 2.2 million. Again, that excludes public-sector job creation. Sounds a little more credible than what the Bureau of Labor Statistics has published, no?

Thursday was a day of great market fun for yours truly. No, I do not consider myself a day trader, but I do go where the action is, and the action once again was in the meme stocks. After an early trade in Workhorse (WKHS) , I really focused upon AMC Entertainment (AMC) , and if that stock didn't simply do everything I could have hoped for, and when I needed to... at that. Yes, our most basic intraday buy and sell signals were batting well more than .500 on Thursday. That baseball coming in at 90 mph-plus started to look like a beach ball.

What did you think, that diluting the stock would force either the chat room traders or the algorithms in competition with them out of these stocks? Think again. Some of these traders look at a warning from management as a challenge. 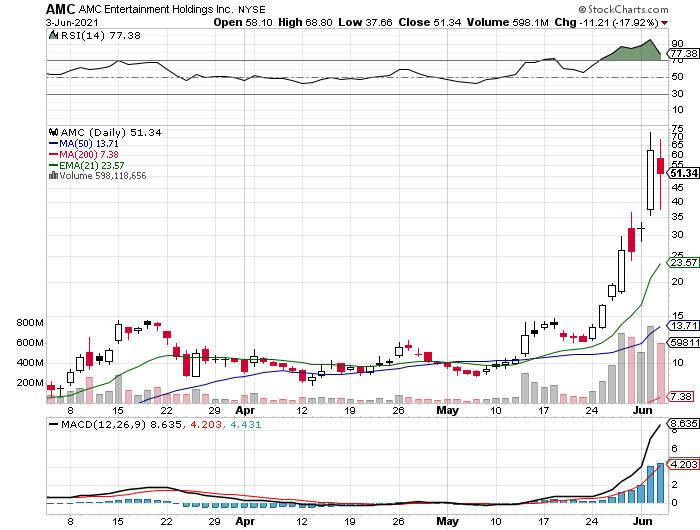 That said, Thursday, for AMC, though down 18%, came on the heels of that 30% increase on Wednesday. Yes, Thursday is an "inside day" with a range that nearly spans the same territory as did the day prior. Inside days tend to signal continuance, and the recent trend as you can easily see is higher. Relative Strength has been ridiculous for a week, and the daily moving average convergence divergence (MACD) has an absurd look to it. I would not go home for the weekend with any position in this name, but then again I would not go overnight any night with a position in this name. I see nothing wrong, however, with a midday game of financial rugby. The action in AMC here on Friday afternoon will be akin to a spectator sport.

Overall, equity markets shaded to the downside on Thursday, the Nasdaq indices surrendering more ground than the rest of our market measures. As has been common of late, the top three performing sectors were all defensive types, while growth and cyclical sectors all placed in the bottom four places of 11 for the session. Losers beat winners at both of New York's primary equity exchanges, though advancing volume did manage to beat declining volume at the Nasdaq. Aggregate trading volume remains elevated across the board, once again somewhat concentrated in those meme stocks.

Several names that are either Sarge staples or have been are engaged in either breakouts or thinking about it in a market that appears to be starting to slope downward. First up, big-time Sarge faves Ford Motor (F) and Nvidia (NVDA) are in breakout mode. Ford appears to be closing in on our $17 target price, while Nvidia is in the early stages of breaking out of a cup pattern that has built a deep handle. 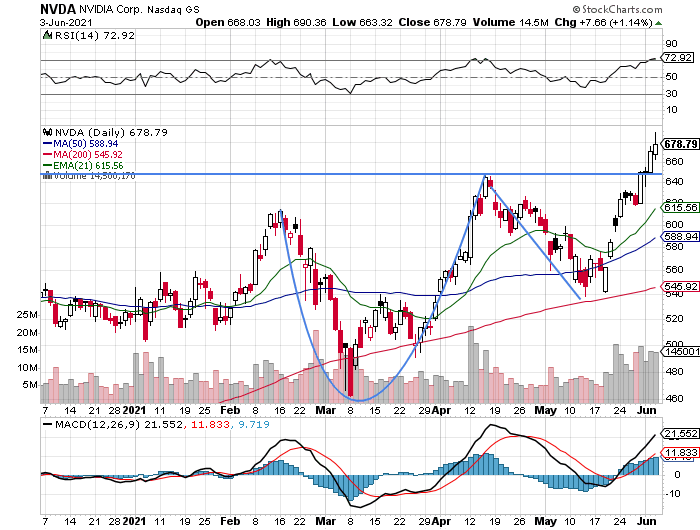 These shares are now techncially overbought, so do not be stunned if you see a retest of that $648 pivot. That said, we now increasing our NVDA price target from $740 to $780, based on the successful taking of that pivot. Let's take our panic point up to $589 (50-day simple moving average) from $573 as well.

On that note, it would appear that your old buddy took his leave of Moderna (MRNA) a tad early, though a wise man (Jim Cramer) once said "Nobody ever went out of business taking profits." Moderna appears to be breaking out past a similar $189 pivot. 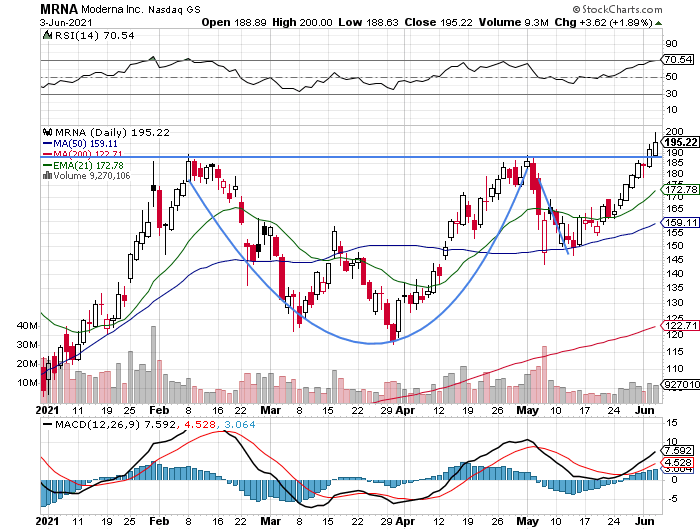 If I were still long this name (and as a service to readers who may be), based upon this chart, I would be moving my price target up into the high $220s.

BTW, both Ford and Nvidia are holdings of Cramer's Action Alerts PLUS charitable trust.

It appears that maybe some progress is being made toward a negotiated bipartisan infrastructure deal that will not just harm economic growth but our marketplace as well if it were to fall apart. The president appears to have moved toward the Republican position on the size of the deal, down to $1 trillion if reports across several news providers prove to be true. The president also seems to have given space on increasing headline corporate taxes from 21% to 28% as a means of paying for that deal.

That does not mean the administration has ceded on everything, not in the least. President Biden still plans to ratchet up IRS enforcement in terms of auditing wealthier individuals who may have made "mistakes" on their returns, as well as implementing a corporate minimum (effective?) tax rate of 15% that would target big companies that through tax credits and deductions are able to whittle their own tax rates down to almost nothing.

I know estimates are just estimates, and estimates made by economists in the employ of the government can be wildly off the mark, but current estimates are that the increased IRS enforcement would raise $778 billion in revenue while the 15% minimum corporate tax rate would kick in $148 billion. That's $926 billion, and as a fiscal conservative is close enough to paying for this still-not-agreed-to plan in full to gain my blessing if asked. (Nobody asked.)

Displaying either a nearly complete lack of cognitive ability, situational awareness, or both.... New York Fed President John Williams on Thursday said, "We're still quite a long ways off from maintaining the substantial further progress we're really looking for in terms of adjustments to our asset purchase program." Williams added, "I just don't think the time is now to take any action."

OK, I have said this before. I will say it again. Members of the committee, read this slowly, or read it twice if you have to. Stop buying mortgage-backed securities. These markets no longer need your support. The younger generation has not only been priced out of real estate, they have had to delay family formation. Don't tell me that you have to watch the data for months on end; that is cowardly, and this is something that can be done immediately without hurting the broader economy.

On Treasury security purchases, tell your pals over at Treasury to offer sizable (tenfold?) 30-day paper to the banks (immediate or cancel, once a month in addition to the weekly auctions) to soak up all this cash sloshing in and out of the Fed's reverse repo operations. Don't tell me the plan is working as it should? Duh. The fact is that it should not have to work as planned as often as it has had to. (Do I really always have to dumb this stuff down for you?)

Let the long end of that curve dangle in the winds of free-market pricing for a little while, as effort is made to pin the short end of the curve to zero. Still with me? Afraid no one will but the 10-year paper? I understand. Who would buy 10-year paper yielding 1.62% with the headline Consumer Price Index running hot at 4.2%? No Americans. That's' for sure.

Wake up. U.S. paper is a global asset. The Japanese economy is currently "humming" along with both a negative GDP as well as a negative CPI. Not only that, one U.S. dollar buys about 110 Japanese yen, up from 102 just a few months ago. Someone will buy this paper, because (for them) these nominal yields are indeed real yields. Maybe better than that when factoring in exchange rates. I really am shaking my head.

There are no significant quarterly financial results scheduled for release today.

Get an email alert each time I write an article for Real Money. Click the "+Follow" next to my byline to this article.
TAGS: Growth Investing | Economic Data | Economy | Federal Reserve | Investing | Stocks | Automotive | Pharmaceuticals | Semiconductors & Semiconductor Equipment | Real Money